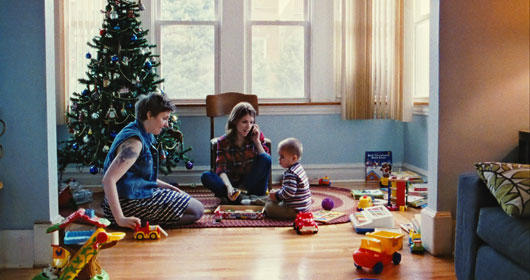 There are prolific filmmakers–Woody Allen famously cranks out a new movie each year–and then there’s Joe Swanberg, who makes everyone else who has ever stepped behind a camera seem like a slacker. Since 2005, the 32-year-old has directed, written and produced 17 films, often starring in them and in some instances serving as his own cinematographer. Once synonymous with the Mumblecore movement, Swanberg continues to evolve with Happy Christmas, a consistently surprising comedy that reunites him with his Drinking Buddies star Anna Kendrick, here cast against type as an irresponsible, down-on-her-luck young woman, who imposes on her brother (Swanberg) and his wife (Melanie Lynskey), and disrupts their domestic tranquility. Happy Christmas is currently available on VOD and iTunes and makes its theatrical release Friday, July 25.

What inspired the story you tell in Happy Christmas?

Joe Swanberg: My wife and I had a kid and we found ourselves in a situation that probably a lot of young artist couples do. We didn’t have a ton of money to pay for childcare. Because I had projects I was working on that were bringing in money, my wife was spending a lot of time being “a stay at home mom.” I think a lot of artists have a hard time relating to the concept of what that means. There are big identity issues wrapped up in that. That was the starting point. Also we bought a house and my little brother moved to Chicago and lived in our basement for a little while so there’s some autobiographical situation drawn from that too. [Laughs] I just wanted to tell a family Christmas story. For Melanie and Anna’s characters the way you go from being in-laws to sisters, the way you take on your significant other’s family-in-law to where they start to feel like your actual brother or sister.

There are several provocative themes in the film. What sort of conversations do you want to inspire?

I definitely want to open up the conversation for women who are struggling with these issues or moms who are not relating to being a stay at home mom. There’s very little of that out in the world. There’s this guilt I think some people feel. Melanie’s character talks about it in the movie. You love your child and you want to do everything you can for them but you’re also an artist or a person who has her own shit going on. I’m hoping the movie can help people dealing with that will have a way to talk about it. I wouldn’t mind at all if it provokes fights between couples. I’m all for my movies sparking debate between men and women.

This role is a departure for Anna and she’s terrific. You worked with her on last year’s Drinking Buddies and you two have a really relaxed chemistry in the new film. Tell me about your working relationship with her.

She’s so smart and funny and so easy to work with. I feel that she’s still so young and it’s so early in her career that there’s a lot of stuff to play around with. She’s very good at playing these uptight characters, who are very in control of their world so I wanted to push her into playing someone immature and reckless and not so on top of things. That was fun for me and I hope fun for her to do something different.

How did you two first connect?

I first saw her in 50/50. She’d already been nominated for an Oscar, but I’m occasionally so out of touch with the world. I saw that movie and thought Who is that? She’s amazing. When we were casting Drinking Buddies I had the chance to Skype with her and I was so excited to connect with her. It turned out that she knew Andrew Bujalski (director of Computer Chess, which premiered at Sundance in 2013) so she was aware of our little mumblecore world. She was just open to coming and doing a movie like that.

It was inevitable that Anna and Lena Dunham would play best friends in a movie. How did Lena become involved?

Lena and I have known each other for a really long time. She saw a web series that my wife and I made called Young American Bodies. We’ve been corresponding and hanging out for 7 or 8 years now. I was in a web series she did called Tight Shots. I’ve been wanting to put her in something of mine, but I shoot in Chicago and she lives in New York so it never worked out. This was finally a chance to cast her in something. She was so busy with Girls at the time so I feel very grateful that she made space in her schedule to come out and do it.

There are three strong female characters in Happy Christmas. What are some of the challenges in creating them?

I’ve sort of tried to avoid those challenges by writing as little as possible and letting the actresses own their characters. Melanie spoke a lot with my wife with the motherhood questions, but I write scenarios and then the dialogue gets improvised. For me that’s the way of avoiding having a very male voice inform these female characters. I would like to say that what’s great about the characters in the movie is what’s great about Melanie, Anna and Lena. It’s hopefully a way of working and letting their strengths come through.

How closely do you guide the performances? Some of the scenes with Anna, Melanie and Lena have a very naturalistic quality.

If you were to look at the outline we worked from, the final movie is pretty close. It’s all those small things that I don’t feel I’d be confident enough as a writer to come up with sitting by myself at a computer. It’s a way to have all the depth and subtleties come from the actors.

You elicited a remarkable performance from the baby in the film. It was almost as if he was taking direction. How was the experience working with a toddler?

[Laughs] That is my son. It’s always a giant question mark when you’re working with anyone who isn’t a professional actor. I think we caught him at just the right age. He was two when we shot the movie. He was just old enough to be aware of what was going on and understand that we were playing around and there was a camera, but he was also young enough to be pretty oblivious in the sense that he wasn’t always making eye contact with the camera and all that stuff. He was pretty agreeable. I’m pretty lucky because it was about a month later that the terrible twos started and he was saying “no” to everything. We just played with him. We took time for him to get to know Melanie and Anna. We let him play with the sound equipment so he felt very comfortable and familiar with what was happening. Also because of the way I shoot there’s not dialogue in the script and stuff like that, he didn’t have to do multiple takes and do the same thing each time. The best way possible to work with a two-year-old is to just let him be a two-year-old and shoot around that.

You’re incredibly prolific. Where does this energy and passion come from? I think you’re a fine actor but why do you take on the added responsibility of acting in your own films?

[Laughs] I like to do it. There’s the selfish aspect that I think it’s fun. It also makes me a better director. Any acting work I’ve done has contributed to the directing skills I have. It’s a very difficult thing to do. I think acting is a very embarrassing thing to do. You’re put in a very vulnerable position where people are looking at you and expecting you to perform. The more acting work I do the more empathetic and sensitive director I become. I’m hoping that as I get busier with filmmaking I’ll still be able to keep acting.

The budgets on your films have increased over the years. How have the benefits and challenges changed?

Every year I’ve been making films has been a better and better time to be an independent filmmaker. Just like an independent band, you put in the time touring and building an audience and over the course of the years you see the audience grow. I’ve been at it 10 years now so there’s a natural evolution of people being able to find my work. I’m able to work with some really great actors, as well, which helps a lot.

Did you ever feel pigeon-holed by being so synonymous with the mumblecore movement?

It’s been interesting. There was a period of time around 2007 when every single thing was about mumblecore. It’s not just me, but all of the filmmakers associated with it were pretty annoyed by it. Looking back, I feel really lucky that I was so heavily associated with it. It’s really hard to get people to see independent films, especially independent films without famous people in them. In a way the word “mumblecore” kind of became the celebrity and the way for audiences to find stuff. It spawned a bunch of major articles in The New York Times and Rolling Stone. I don’t think I’d be able to make the films I’m making right now if it weren’t for the idea of mumblecore.

Being so prolific, do you already have your next project lined up?

I don’t. This is actually the first time since I started making movies that I don’t know what I’m making next. [Laughs] I’m developing something with Fox Searchlight right now. I’m writing a script for the first time. I’m also reading scripts to see if there’s something someone else has written that I’m drawn to. I’m talking with actors and coming up with things, but I don’t know what I’ll shoot next which is nice, actually. I’m typically finishing one film, starting the next and somewhere in the middle on another one so it’s nice now that everything I’ve made during the last six months will get out into the world. Now whatever I make next I’ll be able to really focus on and I’m ready for that. I’m in a place now where I want to try my hand at one thing at a time.