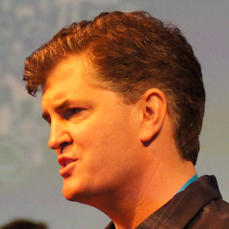 “The site was a place that had itself experienced a deep loss, and it was healing,” Rebirth director Jim Whitaker said about Ground Zero. Whitaker decided to document that healing process by creating Rebirth—a documentary about the trauma, grief, and recovery of five individuals who suffered personal loss in the tragedy.

Process is at the heart of Rebirth as it explores through time-lapse photography the changes at Ground Zero—the transition from a disaster area to a search and rescue operation and then to a rebuilding project—and as it documents, also in time-lapse fashion in the form of yearly interviews, the progression of its human subjects. We witness their movement through the stages of grieving and their eventual discovery of healing and renewal.

Whitaker and Tanya Villanueva Tepper, one of the film’s subjects, answered questions following the Sundance Film Festival premiere at the Prospector Square Theatre in Park City.

How did this idea come about?

Jim Whitaker: The idea of the film came from a moment I went to Nick Wood’s wedding a month after September 11. We were at the wedding, and it was beautiful because we were moving forward, but at the same time there was a strangeness, because I remember a bunch of his friends crying in the corner.

The next day, I woke up and said to my wife, “I want to go down to Ground Zero. I want to go down there and I want to see this and feel it. We’re going to have children one day, and I want to tell them what the day was like from our perspective.” So we went down and looked at the site and saw the pile of rubble, and I had a brief moment where I realized one day this will look very different, and I felt a sense of hope. It caused me to think it would be great if you could show an audience that change in a very short period of time.

So the idea was to put cameras up on the site and start tracking the evolution of the site. We figured out how to do it, and as I was spending time at the site, I started to really feel, as you would, the emotional and human toll of it and the grief. And at that time, I said, it’s time to think of the film differently and find people who were affected by the day and interview them in a time-lapse fashion every year and explore the healing process on a human level.

What will this film’s contribution to the discourse about 9/11 be?

Whitaker: The film is deliberately apolitical. I was particularly curious about the emotion of grief. My mother had passed away six months before 9/11, so when I went down to the site, I was particularly open to experience the grief that was taking place there, and in that openness, I was blessed with a this penetrating movement of “there’s an idea,” and more importantly, I was going through something myself where I said “I can let this pass and just go one to my regular job, or I can engage and make a decision to bring this team together for the sake of understanding the grief, for the sake of history, and for many things. The process was an expression of grief that we all went through together lockstep.

For one of the subjects: did participating in the film make it harder to heal from this? Easier?

Tanya Villanueva Tepper: I always felt that because the events were big, I needed to tell my story so that people knew what the personal stories of the day were. As the years went on, I started to add my own little voice of hope, and it said, “There’s going to be an end. There’s going to be something on the other side.” Also, what helped me get through the grief was knowing others had gone through it before me. That was something I held onto every day. So in that I felt like what I was doing would help others someday, hopefully.

Further reading: Check out the New York Times article on Rebirth and the 10th anniversary of 9/11.