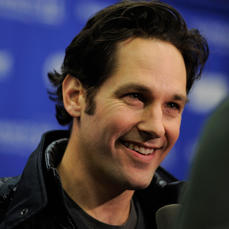 Paul Rudd and Elizabeth Banks at the premiere of My Idiot Brother.
Photo by Brandon Joseph Baker.

Based on the collaborations of director Jesse Peretz and writer Evgenia Peretz, the sibling-centered film My Idiot Brother takes brother-sister dynamics to every extreme. When Ned (Paul Rudd) is released from prison, his three sisters (Emily Mortimer, Elizabeth Banks, and Zooey Deschanel) take turns letting him crash at their place. The comedy really shines with Ned’s candid, trusting attitude. “We had this idea of a character for Paul that was the most open, uncynical person,” Jesse Peretz said. “We really wanted to do something about the complexities of grown sibling life.” The all-star cast, all Sundance Film Festival veterans, joined Peretz Sunday for an entertaining Q&A.

Q: What inspired all of you to be a part of this film?

Mortimer: I really liked the sensibility of this film and how it is very forgiving about people. It doesn’t really come down on one side or the other about life and that really appeals to me.

Banks: I needed a place to go while I renovated my house. This was shot in New York, it was great. And also, let’s all be honest, it starred Paul Rudd.

Q: WikiLeaks started this thing about casting a global stage of honesty – can you draw a parallel?

Peretz: I never thought about that, but you’re right.

Rudd: The Julian Assange of Sundance.

Q: That honesty, you only find that in children and stoners. Paul, exactly how much method acting did you use?

Rudd: I caught the first part of the question, but I was so high I was zoning out. How much research did I do for my method? Surprisingly little.

Q: Is there a meaning or a message for the film that any of you take out of it?

Banks: What I love about the movie is we don’t choose our family even though they throw chaos into your life. Ultimately, at the end of the day, it’s your family that sticks by you no matter what.

Rudd: It’s hard to kind of always see the good, to try and live your life according to that ethic and to try and appeal to people’s best side is sometimes very difficult, but I think ultimately gratifying way to live.

Q: What was it like working with Willie Nelson (Ned’s dog)?

Rudd: It was a very sweet dog. A very sweet dog. And an older dog. Almost a week before we finished shooting, poor Willie left us. Yeah, I know. And we still had scenes to shoot, so you can imagine how upset we were. It was so sad. And Willie’s handler had a couple dogs and they were all related so Willie’s daughter [was in the film]. It was a family affair. It was really sad actually.

Peretz: I hope we didn’t just ruin the movie. There were actually four dogs. We shouldn’t tell people that.

Rudd: There was only one dog.