Is College Worth It? Andrew Rossi Investigates the Alarming Cost of Education in Ivory Tower 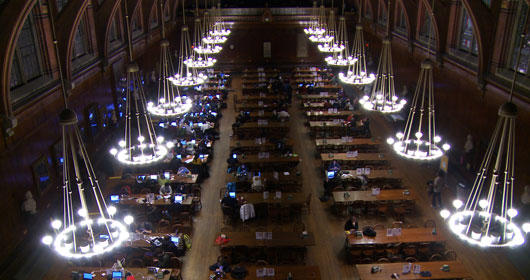 Documentary filmmaker Andrew Rossi is drawn to worlds that at first seem impenetrable. In his previous film, the riveting Page One: Inside the New York Times (which premiered at Sundance in 2011), Rossi obtained a “fly-on the-wall” look at the newspaper industry in a state of transition and turmoil. Now, with his latest documentary Ivory Tower, Rossi departs The Grey Lady’s sanctified headquarters for the hallowed halls of Harvard to find an explanation for the staggering cost faced by Americans in pursuit of higher education.

Upon learning that student loan debt has soared past one trillion dollars, Rossi decided to investigate whether higher education is actually worth the towering tuition charges. Using insightful interviews with entrepreneurs such as Peter Thiel and Internet education pioneer Daphne Koller, the filmmaker takes viewers on a revealing and penetrating journey into the world of public and private colleges in crisis. Ivorty Tower opens in theaters Friday, June 13.

What inspired you to take on this particular issue?

Andrew Rossi: For me education in high school and in college and even elementary school was extremely powerful in a positive way. I had teachers my whole life who were mentors and I took advantage of every extracurricular thing I could in the 18 years I was in the educational system. I have a deep respect for American education as an institution. So when I was thinking about a project to do after Page One, which is about the New York Times and more broadly about disruption in the newspaper industry I knew I wanted to do something that is about an institution or sector that is going through a lot of change. It was at the same time that alarm bells were going off about higher education, such as student loan dept exceeding a trillion dollars and questions about what students are actually learning on campus. That just struck me as so contrary to the experience that I had had in my years of college and grad school. This was an opportunity to go on the ground of campuses and see what’s really going on and have that be the foundation for a broader analytical discussion of what is college about, what it does well and doesn’t do well.

Based on your research and what you’ve witnessed, why are university tuitions so exorbitant?

I think there are a lot of factors that have combined to raise tuition rates since the 1970s, but I think the key paradigm shift that has resulted in this is the change in society’s view of education as public good to now being a private good. Thinking about education as way to make more money vs. a way to grow as a person, to experiment, push one’s boundaries and take four years of one’s life to have an experience that can be rewarding in ways one didn’t expect it would be. Higher education has become so instrumentalist and that has driven the view that people should pay for it, that the government shouldn’t be involved in providing grants, and also that schools need to compete with one another as if they were providing a consumer good. They compete with each other as if the student is a consumer versus a young mind which can be shaped through this experience. This has resulted in a cost spiral with institutions trying to have increasingly luxurious residential facilities, student centers, stadiums and research labs that sometimes aren’t worth the amount of money required to build them and they’re required to charge the student for them.

Do you believe Americans have an obligation to assure young people are able to get access to an education?

I believe there’s a very solid argument for that. History shows us when this country has dedicated itself to providing greater access, higher education has resulted in greater positive social change and economic growth. So, yes, I do think this country should be very concerned with providing access to higher education to any one who believes it will be a productive path for them.

Peter Thiel delivers what’s perhaps the most sobering comment in the film. He says Americans who weren’t getting college educations were once seen as the victims, but now students who do get educations are also the victims. Do you agree with this?

I think it’s true that many students believe they can go to college and incur exorbitant amounts of student debt and don’t fully understand the implications of that for their life. Incurring amounts of debt that will cause them to not start a family, choose certain careers over others that they might not be as passionate about and not go through other milestone events in the American dream, such as buying a car, or buying a house because they went to college and became saddled with an untenable amount of debt. In those cases, particularly when they didn’t understand the loan contract they were signing, they really are victims.

Although the film is still very objective, you’re more of a participant here than in your previous documentaries.

When I am interviewing certain subjects you hear my questions. I think the film is still objective, but I felt that by allowing my voice to appear in certain interviews it acted as a surrogate for what the audience might be thinking. In certain cases, administrators from certain schools have a party line that they present when questioned about their specific school or how higher education is evolving in general. Frankly, I wasn’t buying it in certain cases so I wanted to penetrate the wall of spin that certain administrators provide in interviews. I thought it was important to push harder.

What sort of conversation do you want the film to generate?

I hope audiences think about their decision to either go or not go to college and which college they decide to attend in as rigorous a way as possible. The factors they need to weigh are how much debt they’re taking on, what the earning potential they might have in their community, either regionally or nationally with the course of study they’re going to pursue and generally think really hard about the decision to go or not.