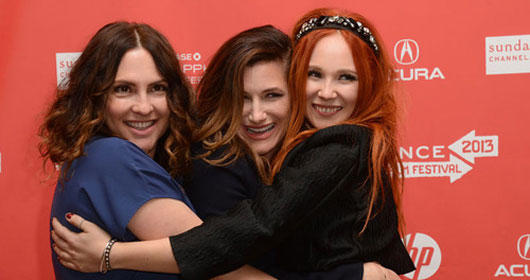 Whatever your show preference, it would appear we are firmly entrenched in the era of serialized entertainment, where one’s fluency in pop culture is directly proportionate to their consumption (see: binge watching) of scripted shows on television or online. For audiences, the medium’s attributes are clear: accessible content that can be ingested in one heaping dose or savored over time. But despite such a sweeping changing of the guard in entertainment, there remains a less than boisterous discussion around the other characters involved: the creators.

While more so an acknowledgement of this evolving landscape than any sort of corrective to it, Sundance Institute has created the just-announced Episodic Story Lab dedicated to supporting writers and creators of series for television and online platforms. The first Sundance Institute Episodic Story Lab will be held in Fall 2014 at the Sundance Resort in Sundance, Utah, and will largely adopt the process of the Institute’s Screenwriters Labs.

The new Lab, stewarded by Feature Film Program Founding Director Michelle Satter, flows with a growing trend of independent filmmakers taking their turns in episodic storytelling, where they’re discovering a lucrative alternative with no detriment to creativity. In the spirit of that creative movement and to celebrate the new announcement, we look at Sundance-supported filmmakers who have successfully taken up the gauntlet outside of the theater.

Mike White
Mike White has honed his chops at the Festival as a writer, director, and actor (Chuck and Buck, Year of the Dog), but is also well-versed beyond the silver screen having written for Enlightened, Dawson’s Creek, and Freaks and Geeks, among other shows.

Cary Fukunaga
Fukunaga took home the Directing Award at the 2009 Festival for Sin Nombre, which was also supported by the Directors Lab, and is now the director behind the hit HBO series True Detective.

Jill Soloway
Between her short film Una Hora Por Favora and her subsequent feature directorial debut Afternoon Delight, Soloway has shown off her dexterity in any number of mediums. She’s written for, among others, television shows including How to Make it in America, United States of Tara, and Six Feet Under. Soloway is currently working with Amazon Studios on the new Web show Transparent, and you can watch the pilot episode for free here.

Lisa Cholodenko
Beyond her work on High Art, Laurel Canyon, and The Kids Are All Right, each of which screened at the Sundance Film Festival, Cholodenko has directed episodes for series including Hung, The L Word, and Six Feet Under.

Katims attended the Sundance Institute Screenwriters Lab exactly two decades ago with The Pallbearer and has since worked on television series including Parenthood, Friday Night Lights, and Roswell.

Bonus Round: Azazel Jacobs
Jacobs most recently screened Terri at the 2011 Sundance Film Festival and has donated his time as a Creative Advisor at numerous Sundance Instiute Labs. His new show Doll & Em premieres tonight (Wednesday) at 10 p.m. on HBO and stars Emily Mortimer and Dolly Wells.