Q&A: Susanne Bier on ‘In a Better World’ 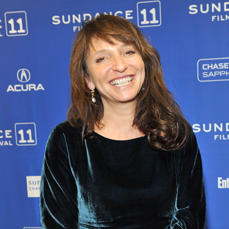 If she were American rather than Danish, Susanne Bier would likely be one of the more recognizable filmmakers in the world. She specializes in emotionally gripping, character-based dramas that manage to be both accessible and aesthetically accomplished. Pigeonholed in the American arthouse, she’s really making stories for the masses.

After edging toward stateside recognition with a 2007 Oscar nomination for After the Wedding, and after last year’s American remake of her wartime love triangle Brothers, the lid might have finally come off when her latest film, In a Better World, took home the award for Best Foreign Film at this year’s Golden Globes. A contemporary allegory about cycles of aggression and revenge, the film alternates between middle class families in small-town Denmark and a medical outpost outside a war-ravaged African village.

It’s a film very much of its moment, but it also addresses perennial questions about how men can coexist without constantly punching one another’s lights out—or destroying civilization in the process. In advance of the film’s U.S. premiere at the Festival (and her position as a member of the World Dramatic Jury this year), Bier talked about the art of storytelling, and why she remains an optimist despite the fragile state of the world.

Your movies make me think about how film functions as a storytelling form. Your work is almost classical in that it’s intensely focused on characters and dramatic events. What draws you to tell stories as a filmmaker?

Storytelling is so basically part of us—it’s almost in our physical makeup. We dream. It’s within us. So to tell stories that are engaging is a way for us to understand one another, a way for us to communicate and ask questions, though we may not get any answers for them. It’s very core to who we are. For me, classical storytelling has always been the most satisfying. I grow impatient with withdrawn or restrained storytelling. It’s not that I like indulgent storytelling, or to have things stuffed down my throat. But I do like it to move forward.

Why is it important for you to elicit an emotional response from the audience?

It’s much less so in America, because here it’s okay to do emotionally engaging stories, but when I’m asked that question in Europe it’s always somehow connected to a sense of being manipulative or overtly calculating. I’m not particularly calculating, but I do go with what I find to be emotionally correct; I follow the emotional development. Which, I think, does have the effect of being emotionally engaging. I would much rather leave a cinema having been too engaged, and having cried a lot or perhaps too much, than leaving and feeling that this was a very mature and slightly boring experience. And there has been a tendency, at least in Europe, to appreciate that latter way of making movies. There’s a sense of where good taste starts and begins, a certain fear of emotions, which I don’t agree with.

Those who appreciate and evaluate contemporary film would never judge a work of classical drama for the elements that you’re evoking in your films.

Because of the time gap, they seem inclined to put those things onto a shelf of more philosophical works. But when you actually look at Greek tragedies or Shakespeare, it’s super, super emotionally charged.

As in most of your films, In a Better World puts characters in an almost constant state of moral conflict. There are ethical dilemmas almost every step of the way. Your work often gets called melodramatic because of its emotional content, but melodramas don’t normally have that rigorous sense of moral inquiry.

The extreme version of emotional storytelling would be like a bad soap opera—where you’re supposed to feel emotionally engaged but it has no substance. That doesn’t work for me. I prefer to propose moral dilemmas that are very timely and relevant to what’s happening to human beings today, and the only real way to throw these questions at an audience is to engage them emotionally.

They’re almost always impossible scenarios, Sophie’s choices. There are consequences and punishments and tragedies, but there’s never an obvious solution.

That’s right. I think that life is exactly like that. You’re often faced with questions or problems or conflicts for which there is no right answer. But yes, there are still consequences.

But we’re all children in that sense—we want answers.

But then you have to go home and think, and figure it out for yourself. As a filmmaker that’s not really my job. The furthest I can go is to ask the questions.

With this film you seem fascinated by masculinity, in how men become men and deal with the expectations of manhood. Is there something about living in the world today that’s particularly challenging for how men make sense of themselves?

I think there’s been a change in values. You have kids very much being brought up by women, and there’s been a notion that the right values come from women. And I don’t necessarily agree with that. So I feel there’s something important going on, which has to do with manhood and addressing those issues. It’s kind of fascinating and dangerous at the same time.

Since you’re switching between continents and contexts in this film, there’s a sense that these issues are universal, but also that these events can have real, specific repercussions.

The standard of living couldn’t be more different between Denmark and Africa. The situations are extremely different. But as human beings we’re not that different. Although the consequences in Africa are more extreme, the consequences in Denmark are also very bad—more severe than we’d anticipate. I’m questioning that whole notion that in Northern Europe, or the West, we’re so civilized and privileged that we’re pretty secure.

We’re obviously more privileged, but we’re not particularly secure in our values. They should be just as easily questioned as they would anywhere else. This movie is, in a way, about how to bring up the most unlikely little terrorist. You have this innocent boy, a kid from anywhere, and something in his life makes him very angry. Understandably so. What I’m saying is that it doesn’t take that much. We have to be extremely cautious and careful, at all times keeping our principles alive. We can’t just rely on them being there, and being safe. Because they’re not.

In the film, violence and aggression almost become their own objects. A desire for revenge becomes its own physical presence in the room.

It often is that. It starts somewhere else and then becomes a thing with its own set of rules and sense of satisfaction.

Is the world a more dangerous place now than it has been?

Well, I don’t want to make statements about the world today as compared to history. It’s a pretty presumptuous thing to do. But certainly it’s much more fragile than we think it is.

It almost doesn’t matter if it is or is not more dangerous than it used to be, what matters is how it feels to live within it.

Exactly. Which is why I don’t want to address whether it is more dangerous or not, because I think it’s irrelevant.

Would you call yourself an optimist?

This movie has a lot of hope in it—all of my movies do. The only reason for telling these stories is to say that we have to be cautious of what we believe in, and also have to hope for its sustainability. Our only hope is to address it. I’m very optimistic. I believe in goodness, in forgiving, in life.