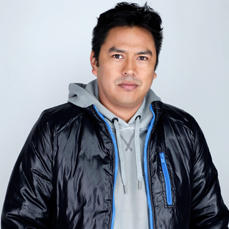 Billy Luther studied filmmaking at Hampshire College, where he developed an affinity for documentary, but he says that much of his real education happened working in various organizations, including the National Museum of the American Indian and Third World Newsreel. Luther, who belongs to the Navajo, Hopi, and Laguna Pueblo tribes, has also won numerous grants and fellowships, including a Tribeca Film Institute Media Fellowship and Sundance Institute’s Native Initiative/Ford Foundation Fellowship.

Luther screened his first feature film, Miss Navajo, at the Festival in 2007, and is back this year with a new documentary, GRAB, a portrait of contemporary life in the Laguna Pueblo tribe in New Mexico, which honors family members in an annual tradition that involves throwing food and gifts from the rooftops of their homes to the community that gathers below. Narrated by Parker Posey, GRAB screened in the Festival’s Indigenous Showcase.

You studied film at Hampshire College and found support for your projects through several filmmaking initiatives, but what made you want to be a filmmaker in the first place, and what drives you to continue?

I knew at an early age, watching television, and also going to the movies, that I wanted to tell stories. I spent a lot of time at the movie theater—I’d watch two or three movies at a time, and then talk about them with my parents. When I’d spend time with my grandparents, they’d watch Dallas and Dynasty, and I loved those stories, too; it was such a fantasy world. But the thing was, I didn’t see any Natives, and I was like, just put a Native in there—Joan Collins’s Cherokee sister or something!

Your two feature films chronicle lives and stories from the Native American community – how significant is filmmaking and visual storytelling to this community?

My audience is both Native Americans and non-Natives. Growing up, I didn’t see images of contemporary Native life, and this is something I think non-Natives say a lot, too, that I’m showing people something they just don’t usually see. And Natives come up and say that it’s great that they’re finally getting to see a Native American tell our stories.

But I don’t approach filmmaking that way. I approach my projects by saying, “What do I want to see?” I don’t want to teach anyone anything and I don’t bombard you with facts and information; it comes up naturally. Miss Navajo includes the loss of language issue, for example, and GRAB is about a community with a lot of obstacles, but the people in the films continue to practice and observe their traditions. So these themes are in the films that I make, but in the end, I really want my films to entertain.

How receptive was the Laguna Pueblo tribe to your idea of documenting Grab Day?

The community had been closed off from photography, and there were warnings posted about not shooting pictures. But I was able to get access and support, which was amazing. I showed respect, too, in not revealing things that were very private. Some people had seen Miss Navajo, and they knew that I wasn’t going to exploit them. In general, some communities are very strict about any kind of filmmaking, so I hope this film opens a door.

What would you say are the top issues facing emerging Native filmmakers?

You have to volunteer, network, meet people. I also tell people, if making money is your goal, you should look elsewhere. It’s really difficult to continue working as a filmmaker. But it’s a job I love to do. I was telling my parents past year, “Thank god I don’t sit behind a desk.” I’m either on an airplane going to some crazy location to show these films, or making them. How else would I go to Sami, Norway to show my film on ice? Who’d have thought that? Or at the Sydney Opera House, showing my film to indigenous communities there? I’m meeting so many people and I love what I do.