In the Trenches: Braden King on His Road Movie ‘HERE’ 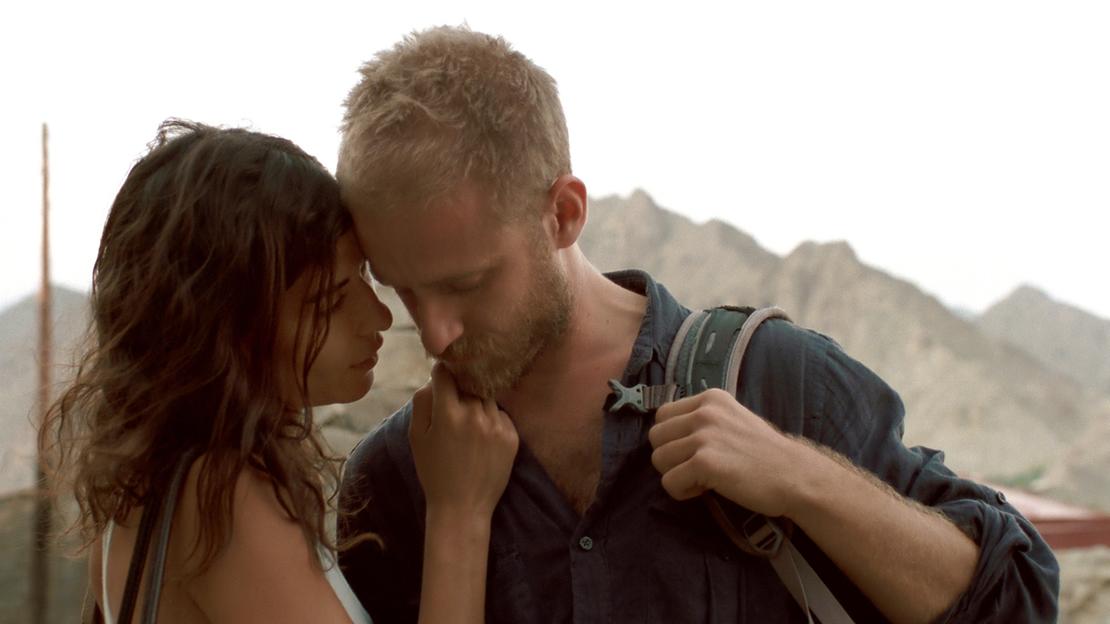 In the summer of 2009, I spent four months in Armenia directing HERE, a 35mm landscape-obsessed road movie that chronicles an impulsive relationship between an American satellite-mapping engineer (Will Shepard, played by Ben Foster), and an Armenian expatriate art photographer (Gadarine Nazarian, played by Lubna Azabal).

The film was developed in part at the 2007 Sundance Institute Screenwriters and Directors Labs and premiered at the 2011 Sundance Film Festival. HERE begins its U.S. theatrical run at the IFC Center in New York this Friday, April 13. It will open in Los Angeles on April 27 before expanding to additional cities throughout the country.

Ilyse McKimmie, associate director of the Sundance Institute Feature Film Program, asked me to put together an essay on the shoot when I first returned from Armenia back in 2009. I immediately said yes.

The following is a recently revised version of those earlier, much more fresh recollections.

“You must be exhausted, elated, depressed, broke, happy and drunk all at once.”
—David Riker, Writer/Director (and 2007 Sundance Screenwriters Lab colleague)

I’d been home for a week or two when I received Ilyse’s request in early October 2009; it seemed like a good way to start processing what I’d just been though. It had been difficult for me to keep much of a journal during production and I thought this might be a good way to navigate the intense memories and experiences of the shoot. But then: nothing.

During my worst battles with the screenplay the blank page had never roared so loud. I became so good at avoiding this piece that I finally realized there had to be something I was trying to avoid, something I didn’t want to confront (at least not yet). It wasn’t that I wasn’t intensely proud of what the cast, crew, and I had accomplished that summer – I was. But it had been, as they say, an experience. I had no answer when friends and family I hadn’t seen for months asked, “How was it? How do you feel?”

I felt numb. Used up. Spent. Exhausted. Ultimately, in all the right ways (I think).

It was an adventure. It was magnificent. It was terrible. It was hard. We were the first American production ever to shoot in Armenia. There is almost zero domestic film infrastructure. Few outside the capital speak English. Everything—equipment, film, expendables, supplies—everything had to be shipped in and out through a byzantine ex-Soviet customs “system.” There were no film labs.

The schedule was crazy. I don’t think we spent more than three or four nights at any single base camp over the entire 40-day shoot. People got sick from the food and sick from the weather. Picture cars were impounded due to mismatched picture plates. Producers had to be bailed out of jail. Hot springs weren’t hot—they were freezing. The Russian military detained half the crew at gunpoint for hours and tried to take our cameras and film on the Iranian border. We found poisonous vipers in the fields where we shot the film’s final scene. Breaking two ribs in a rather unglamorous accident on a night shoot just a few days in seems like a complete non-event in retrospect.

By the start of the second week of shooting I was obsessing about the corner I’d painted myself into. How did I ever think this was a good idea? Bringing 40-odd people into a multi-national makeshift convoy through the Armenian landscape and land-mine strewn areas of Nagorno-Karabakh suddenly seemed completely insane.

In other words, it was perfect.

With the tiny bit of reflection I’ve been able to have since returning, the accomplishment I feel most deeply is that the production allowed those who heard its call to bring so much of themselves to the journey. HERE was not controllable, but alive, breathing. The film brought cast and crew together from the United States, Armenia, France, Denmark, Peru, Serbia, the United Kingdom, and more. Like the film’s two main characters, we found ourselves somewhere new, somewhere unmapped, exploring uncharted territory – both literally and metaphorically. We lived with Will and Gadarine. We took the same trip. In the end, that’s exactly what I’d hoped the experience might be. HERE is a film about mystery, wonder, and the inexplicable – the limits of logic and the divinity of everything we don’t know but that we can feel. The production itself became about all of those things, too. We encountered great difficulty, but by passing through it we ultimately found great revelation.

Even now, three years later, I think we’re all still recovering. It seems like everyone still feels the same thing: the only people who can really understand are the ones who were there. We’re like some kind of crazed war veterans, for God’s sake – a marked group of cinematic soldiers (some literally: ten returned with maps of Armenia freshly tattooed on their bodies) who slogged through these ridiculous, sublime trenches together.

Filmmaking is like being continually confronted with a wave you’re not quite sure you can take. You either start paddling and surf it or it pounds you right down. (Often, both happen in the course of a given day or a given hour). That feeling is one of the things I’ve grown to love most about the process. I couldn’t be more proud of and thankful for everyone – cast and crew alike – who heard the call and rode this wave with me.

HERE opens Friday, April 13, at IFC Center, New York. Co-Star Ben Foster and Director Braden King will be present at the 7:05 and 9:45 p.m. screenings. For showtimes and to purchase tickets, go to http://www.ifccenter.com/films/here/.

HERE on the web: