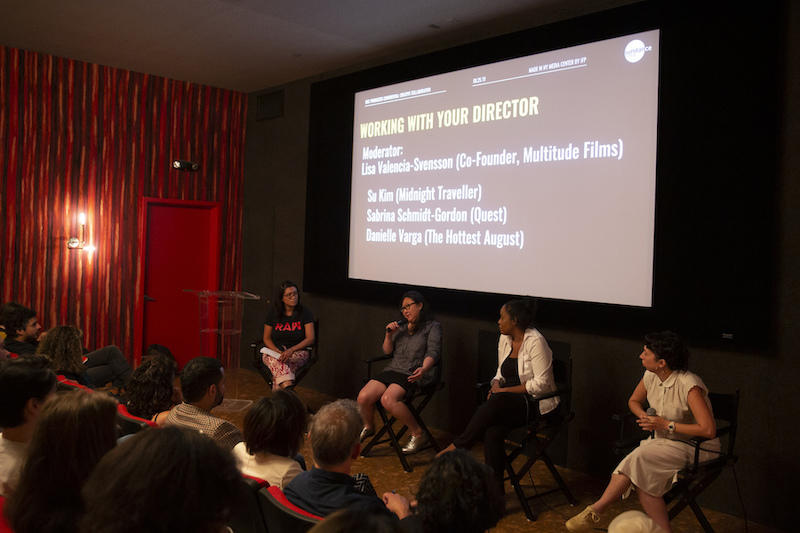 The Producers Confidential is a public program hosted by Sundance Institute’s Documentary Film Program, and it spotlights the artistry and creative spirit embedded in nonfiction filmmaking from the perspective of the producer. Mariales Diaz was in attendance at this year’s confidential. They are a director, producer, NeXt Doc fellow, and Jacob Burns Creative Culture fellow. Here’s what they had to say about the event!

Many people don’t know what producers are, what they do, or how to become one. Sundance Institute’s 2019 Doc Producers Confidential: Creative Collaboration was designed to answer these sorts of questions. “A producer is an equal collaborator with the director,” Kristin Feeley explained during her opening remarks. “The literal definition of a producer is a person that makes things, not the just person that fundraises for your film.”

The Producers Confidential did more than just define a producer’s role. During the two panels (moderated by Lisa Valencia-Svensson, co-founder of Multitude Films, and Darian Henry, co-founder and co-director of NeXt Doc), the panelists went into a lot of detail about how they choose which projects to commit to—an essential part of their work.

1. Seek out projects that excite you.

Panelist Danielle Varga (The Hottest August) said, “If the process isn’t going to provoke some of my own curiosities, I don’t know if I’m game.” Moderator Lisa Valencia-Svensson (co-founder of Multitude Films) added sarcastically, “An experience that is enjoyable along the way—what a concept!” The room broke into laughter.

I must admit that I went to this program with many assumptions of who producers are, including the misconception that producers aren’t seeking stimulation through their work. But the panelists highlighted this: producers should be excited about projects, too.

2. Find directors (and teams) you believe in.

For many producers, it’s not enough to just love the project itself—they also have to know they can work well with the director. Su Kim (Midnight Traveler) explained that she goes for walks with directors to see if they will be compatible. Sabrina Schmidt-Gordon (Quest), said that she needs to know the relationship directors have with the work they’re doing before she will commit to a certain project. She does this to avoid creating problematic work—she doesn’t want to work with directors who don’t have a sincere and authentic relationship with their topic and subjects.

Sofian Khan (The Interpreters) expanded on this idea; he explained how important it was for him to have an all-Muslim team when working on Muslim narratives. That is his way of working to avoid the approach some documentary filmmakers use of “parachuting” in and out of a community, which creates colonial narratives.

Inevitably, the conversation extended to diversity. Amanda Spain (Bathtubs Over Broadway) put it bluntly: “Not listening to young voices and underrepresented communities is bad business.” And it’s true—the film industry needs money to make films, and representing a diverse group of artists both in front of and behind the camera will make more money from more audiences. Beyond this, though, I really do hope we reach a place in film where money isn’t the only incentive behind valuing the voices and lives of youth, especially Indigenous people and people of color. Still, the panelists made it clear: listening to underrepresented communities is vital for any producer.