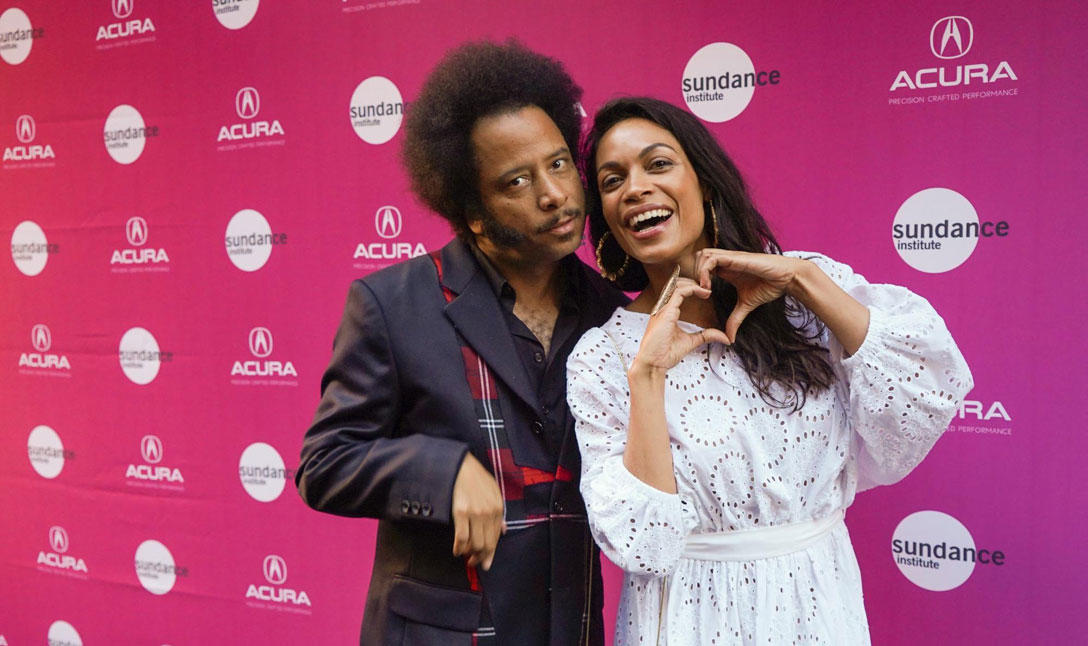 “Coming up to people as a musician and saying I got a script—nobody wants to hear that. They’re like, yeah, of course you want to make a movie. You probably want to get a line of shoes, and you want to get a barbecue chain or something like that,” said first-time director Boots Riley at last night’s special L.A. screening of his film Sorry to Bother You.

Riley and his film brought out a spirited audience of Sundance Institute supporters who packed the historic Theatre at Ace Hotel to honor the filmmaker with the Sundance Institute Vanguard Award presented by Acura—an annual award that honors artists whose work and vision represents breakthrough innovation, originality, and independent spirit. “We truly believe that a story driven by an individual, authentic voice can awaken new ideas… and it can even lead to social change,” said Sundance Institute trustee, and one of the film’s producers, Charles D. King to kick off the festivities.

Riley, best-known as the lead vocalist for the groundbreaking hip-hop group The Coup, has always been interested in working at the intersection of art and activism. “Boots’ vision is uncompromising, bold, and utterly unique. His execution is provocative and full of action, heart, and humor,” said actress Rosario Dawson, who presented Riley with the award. In Sorry to Bother You, Dawson plays the most un-boring elevator voice ever recorded—one of the many ways the film irreverently explores the concept of adopting a voice. The film follows the surreal journey of telemarketer Cassius “Cash” Green who finds success when he taps into his “white voice” to make sales and rise the ranks in a corporation with stunning levels of moral corruption.

Riley, who attended film school in San Francisco before forming The Coup, returned to his home base of Oakland to make his first film. But getting it made took some time. First written in 2012, Sorry to Bother You was published as a paperback book in McSweeney’s in 2014, and the movie premiered at the Sundance Film Festival four years later. “Unfortunately, the world hasn’t changed enough to make the movie irrelevant,” Riley said. The story audaciously imagines the extreme stakes of social and political unrest. “Unlike a lot of Hollywood projects, it is of the time––it’s of the movements that are going on right now.”

In 2015, Riley brought his script to the Sundance Institute Screenwriters Lab, then in 2016 he took part in the Directors Lab, the Screenplay Reading series, the Creative Producing Summit, and Sundance Catalyst where he connected with investors before premiering the film in the U.S. Dramatic Competition at this year’s Sundance Film Festival. “Working in the music industry for the last 20-something years, the way I had to do it… I didn’t feel like I had a team, if I didn’t do it [myself], I worried it wasn’t going to happen. With Sundance it was the first time I felt like people were actually doing things for me when I wasn’t even asking them,” Riley said. He thanked Sundance for pushing his project forward, including Michelle Satter, the Founding Director of the Feature Film Program. “Once I joined the Screenwriters Lab… it felt freeing. It felt like I could come up with ideas and bounce them off of people and I had a team––a family of creative folks that were looking out for me.”

The collaborative effort behind the camera also translates on screen. Mesmerizing performances by Lakeith Stanfield, Tessa Thompson, Steven Yeun, Jermaine Fowler, Armie Hammer, Omari Hardwick, Danny Glover, Terry Crews, David Cross, Kate Berlant, and Patton Oswalt, along with a vibrant soundtrack by The Coup propels the absurdist dark comedy into a sensory rich, tangible universe. Infusing broad social commentary about race and capitalism with the existential crisis of an individual trying to make it in the world, Riley creates a terrifying yet easily relatable world. Without spoiling any of the mind-blowing twists, Riley’s artistry speaks to the poetic justice of humans evolving to rise up against adversity to save humanity. Or as Dawson put it before handing Riley the Vanguard Award: “You are walking poetry—you are absolutely a part of this movement generation.”

This screening and award presentation took place as part of Sundance Institute at Sundown presented by Acura and in collaboration with Annapurna Pictures, a benefit event that directly supports independent artists around the world throughout the year. Photos from the event can be viewed here.