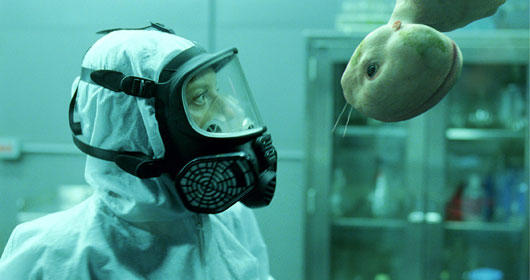 Of the innumerable and ever-proliferating genres of cinema, no category thrives on viewer polarity more than horror flicks. From the superfluous gore of bloodbath films like Dead/Alive, to the taut suspense of iniquitous thrillers such as American Psycho, films of this category are often met with categorical opinions.

Whatever your preference, it’s hard to escape the presence of horror in the month of October, which is why we offer up our annual list of Sundance-supported films for Halloween. Check out some of these and other Halloween flavored films in the featured GoWatchIt channel Best of Sundance Midnight.

By far the creepiest film out of the 2013 Sundance Film Festival, Jim Mickle’s We Are What We Are skirts the line of what we know as “horror.” Employing a grave cinematic aesthetic, Mickle’s film invites viewers into the Parker family’s seemingly chaste home, where the father, Frank, is dogged in maintaining one disturbing family secret—even at the cost of his own kin.

The classic monster film gets a welcome redux in Vincenzo Natali’s Splice, replete with sharp visuals and piercing sound design. Two scientists, played by Adrien Brody and Sarah Polley, create an inexplicable new breed of organism thanks to some frightening scientific gaffes.

Director Nicholas McCarthy pulls off an all-too-believable haunted house thriller with The Pact, which sees a young woman, Annie, return to her childhood home as she attends her mother’s funeral. But the dark dwelling of her youth does not offer a pleasant homecoming, and Annie enlists the help of local law enforcement and spiritual experts to find out more about what secrets the house may hold regarding her mother’s death.

Abel Ferrara couldn’t have known it at the time, but the eternal wave of the vampire genre wouldn’t actually crest for another decade after his ode to traditional vamp cinema with The Addiction. Starring Lili Taylor, Christopher Walken, and Annabella Sciorra, this 1995 Sundance Film Festival selection is a refreshing departure from the cloying romance that has contaminated the vampire genre in recent years.

Depending on your outlook and disposition, Funny Games could either be the most apt or the most incongruous title for a mockingly sadistic film such as this one. Senior Programmer John Nein described director Michael Haneke’s brilliant drama in so many words:

“Refusing to tiptoe around the brutality inflicted on a family, Haneke doesn’t want to entertain you; he wants to challenge you. He wants blood flowing to your brain, not just across the linoleum. Why wouldn’t he remake the film for Americans? It’s about us.”