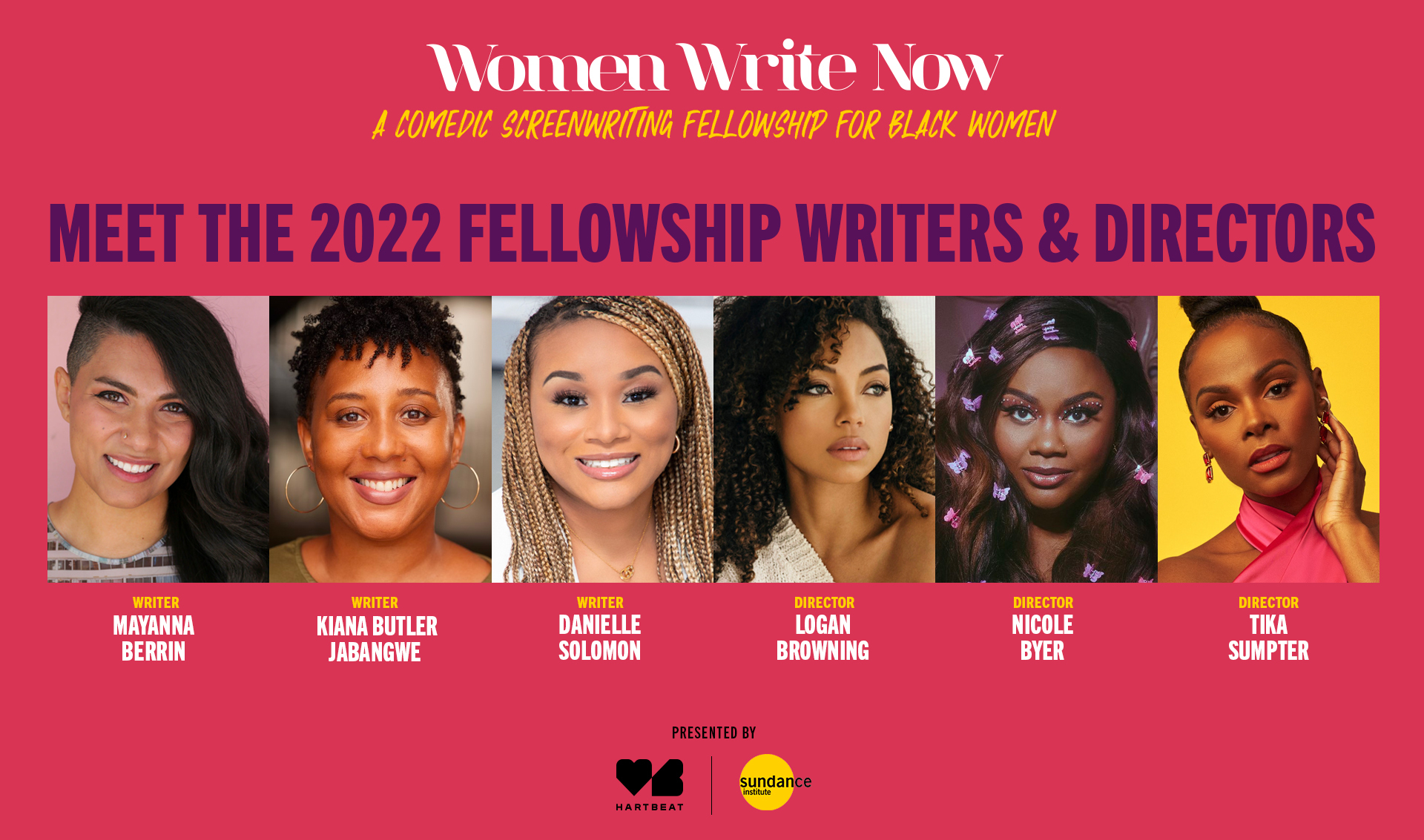 Selected fellows Mayanna Berrin, Kiana Butler Jabangwe and Danielle Solomon to develop original comedic projects with the guidance of some of the most accomplished Black writers, directors and executives in comedy

The fellows were chosen from hundreds of submissions from aspiring screenwriters across the country to further develop their scripts under the guidance of Hartbeat’s panel of script mentors and creative advisors including Leigh Davenport (Starz’s Run the World), Kay Oyegun (NBC’s This Is Us), and Yamara Taylor (ABC’s Black-ish).  Logan Browning (Netflix’s The Perfection, Netflix’s Dear White People), Tika Sumpter (Sonic the Hedgehog, ABC’s Mixed-Ish) and Nicole Byer (Netflix’s Nailed It, HBO’s Black Lady Sketch Show) have also signed on to direct the short films.

Developed in partnership with Sundance Institute, program founder and Heartbeat CEO Thai Randolph created the fellowship program alongside founding partners Candice Wilson Cherry, Jennifer Kushner and Michelle Satter of Sundance Institute to champion the next generation of Black women in comedy, bringing together some of the most accomplished Black writers, directors, producers and executives in comedy to mentor the group of emerging storytellers.

“As a leading player in comedic entertainment and one of the most sought after creative engines for studios, streamers and brands, we feel we have a responsibility to seek out, nurture and promote the next generation of talented storytellers and escort them into doors that might otherwise be closed,” said Thai Randolph, HARTBEAT CEO.  “It’s our privilege to collaborate with this new cohort of creators and we are honored to have partners like Sundance who are as committed to this work as we are”.

“The Women Write Now program sets its participants up for success by prioritizing both development and distribution of these short films while also connecting these storytellers to a broader community of industry mentors and allies.” said Michelle Satter, Founding Senior Director, Artist Programs. “It’s an all-encompassing approach to artist support and we’re so pleased to be partnering with Hartbeat once again on this incredible and well-deserved opportunity for Black women in comedy.”

The 2022 Women Write Now fellowship brings a new panel of creative advisors and special guest directors to guide each fellow through the development process of their original scripts. Projects will receive distribution across Hartbeat’s flagship consumer brand, the LOL Network, which reaches audiences across its O&O social media, audio, and OTT partners.  Hartbeat will also award each fellow with a twelve month first-look deal, during which the fellows can submit original projects for production consideration and distribution across the LOL Network.

Upon completion of the screenwriting lab, the fellows will bring their original projects to life, under the guidance of Hartbeat’s creative team and the guest directors.  Each project will then premiere at a private screening at the 2023 Sundance Film Festival.

“Women Write Now has created an abundance of opportunities like I’ve never seen before. From outreach to mentorship to dismantling Hollywood’s gatekeeping, this program builds an equitable legacy for Hollywood,” added Actress and “Hey Boo” Director Logan Browning. “Everyone involved has felt like family from day one, and I am honored to collaborate with so many kind and talented creatives.”

The 2022 Women Write Now screenwriting fellows and their projects are:

Bio: Born and raised in Downtown Newport News, VA, Danielle studied broadcast journalism and playwriting at Howard University. Today she lives in the world of network television and continues to hone her storytelling skills in preparation for what’s to come.

About: Atlanta’s top braider, notorious for canceling on clients, finds herself having to braid her way out of being canceled by one of the biggest social media influencers.

Bio: Kiana Butler Jabangwe is a storyteller from Long Beach, California who writes about the everyday lives of Black women and girls. Kiana co-created the web series “Mixed,” and her writing has been published in the LA Times. Kiana is a graduate of the USC Annenberg School for Communication and Journalism.

About: ​​It’s the first night new parents Pat and Curtis have without their baby, and they’ve been anxious for a chance to rekindle their flame. When Curtis convinces Pat to smoke a little weed, Pat experiences major mommy guilt and trippy hallucinations.

Bio: Mayanna Berrin is a writer, voice actor and stand-up comedian based in LA. After completing her BFA in Theatre at the University of Miami she completed the Second City Conservatory program and worked at Riot Games, Netflix and most recently Mattel where she writes, develops, and produces narrative YouTube content for brands.

Founded by Kevin Hart, Hartbeat is the global, multi-platform media company creating entertainment at the intersection of comedy and culture with a mission to keep the world laughing together.  Hartbeat delivers comedy through its three divisions: Hartbeat Studios, which finances, develops and produces innovative content; Hartbeat Media, which connects with consumers around the world through events and the company’s expansive distribution network; and PULSE, the company’s branded entertainment studio that serves as a creative and cultural consultancy to brand.  Hartbeat’s flagship consumer brand, the LOL! Network, reaches audiences across its O&O social media, audio, and OTT partners.

Led by an award-winning team, Hartbeat is a valuable partner to the biggest entertainment companies, platforms and brands in the world, driving cultural currency and generating sales, subscriptions, buzz, and conversation with some of the most coveted audiences.