Q&A: George Takei Finds His Greatest Role as an Activist in the Doc ‘To Be Takei’ 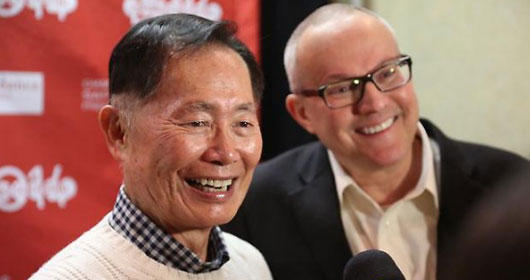 This interview was originally published following the world premiere of the film at the 2014 Sundance Film Festival.

George Takei is on a mission. With boundless energy, relentless good cheer and a hearty chuckle, he’s been omnipresent in Park City while promoting To Be Takei, Jennifer Kroot’s vibrant portrait of the energetic 76-year-old actor, worshipped around the globe as Star Trek’s helmsman, Sulu.

The documentary reveals Takei’s childhood, much of it spent in internment camps for Japanese Americans during World War II, as well as his later personal struggle as a closeted actor. Takei came out publicly in 2005, and following his marriage to Brad Altman three years later, he has become a tireless and outspoken activist for LGBTQ+ equality.

During his numerous press interviews at Sundance, Takei hasn’t missed an opportunity to take jabs at Utah Gov. Gary Herbert over his decision not to recognize same-sex marriage. As his nearly six million Facebook followers will attest, Takei has used his social media presence as a game-changer for issues he advocates in a way few celebrities have. Gov. Herbert, consider yourself warned.

How did you and Brad connect with Jennifer to make the documentary?

Jennifer approached us. It turns out she is a Trekkie from way back. She read my autobiography [To The Stars] and observed I had been active in advocacy for civil rights during the ‘50s, ‘60s and ‘70s and she was intrigued by the Star Trek popularity so she approached us.

What convinced you to accept her proposition?

We did not know Jennifer from Eve—not Adam, since she’s female. [Laughs] We asked to see her film It Came from Kuchar and found it very impressive. We talked a lot and wanted to make sure her philosophy of life and vision for her project was what we’d want to see.

Once we were satisfied that we were kindred and she’s a fine documentarian, we thought the timing of this project coming at us was amazingly prescient because the struggle for equality for the LGBTQ+ community was accelerated. To chronicle that arc would be not only important but, certainly for us, personally gratifying.

Also, another project we’d started to develop, Allegiance, a musical about the internment of Japanese Americans, was starting up then, and this was a chance to record that process—they’re both about social justice—so we agreed to do it.

Were there any other objectives you had in making the film?

We were hoping we’d have Allegiance opening on Broadway by this time but alas there have been difficulty getting it into the right theater so it will be opening later this year. We had what we call the royal premiere in San Diego at the Old Globe Theatre. So we did what we set out to do. Jennifer accomplished it brilliantly with humor and the seriousness of the subject balanced. The humor is organic—it’s not telling you a joke—it’s in the identifiability of our relationship.

I agree and despite your celebrity status, you and Brad come across as a very relatable couple. Did you have conversations about how much access you’d allow into your personal lives?

That’s the very thing we wanted to display—the normality of our relationship. It’s not too much unlike the rest of America’s. We have our little squabbles and we have our working together in concert. We are partners in career as well as in personal life so our life together is an open book. Sometimes there’s boringness, but sometimes there’s the craziness of an actor’s life that’s shoe-horned into a normal life.

You saw the final cut of the film for the first time at the premiere here on Saturday. What was the experience like watching your life play out in front of an audience?

That was really special. Seeing it together is a communal experience and to get the laughs where we expected to see them and to get the gasps or tears and sobs, it’s so gratifying that we’re connecting with the community that’s gathered into the theater.

And for our opening here in Utah, it was an amazing confluence of forces because the film is about the struggle for equality for the LGBTQ+ community and we were delighted when it was accepted into Sundance because we’d be opening in a marriage equality state but then things started to happen and it is reflecting the importance of the message of this film.

Sundance is a prestigious festival in a state where the struggle for equality is really coming to a head with this governor Gary Herbert and his resistance.

You’ve been very vocal in speaking out against Gov. Herbert.

I use a Star Trek phrase: “Resistance is futile.” [Marriage equality] is certainly going to become not only the rule of the land but also of Utah. Right now we have a divided nation. Seventeen states have marriage equality, plus two states that are question marks—Utah and Oklahoma. Oklahoma is waiting to see how it goes here so Utah is pivotal to the equality movement.

So the fact that the film is opening here at this prestigious festival in Utah with that issue coming to a head right now with this governor, it’s like George Wallace did half a century ago trying to deny little black children a quality education. In a short 11-day period, 1,300 couples seized that opportunity and got married—that’s 2,600 citizens of Utah. There’s that hunger for it here.

The governor of the state has to be the governor for all the citizens of that state, but he consciously and willfully inflicted damage on 2,600 people of his state for no good reason. When they appealed it to the Supreme Court, the argument they put up was heterosexual couples raised better children than gay or lesbian couples. Well that’s been clearly proven wrong, so it’s going to happen in Utah whether he likes it or not. Resistance is futile. [Laughs]

When you came out publicly in 2005, did you have any idea you’d become such a prominent poster boy for LGBT equality?

That would have required me to be a prophet. You know actors have egos, so I’ll say, “Yes, I knew.” [Laughs]

While we’re on the subject, there has been a lot of press recently about whether closeted politicians who have antigay voting records should be outed. What’s your opinion on this?

I don’t believe in outing people because there are individual situations, but politicians who have taken a position contrary to what they really are they need to be called to task. You know it’s like when you’re training a dog to be housebroken you push his nose to the accident he’s committed. A politician who has been hypocritical and dishonest has no place in public service and they need to be called to task.

One of the most entertaining elements in your documentary is your alleged long-running feud with your Star Trek co-star William Shatner. It makes for good copy, but since he agreed to be interviewed in the film, I had to wonder if the rivalry is real.

[Laughs] Bill is a difficult person to work with. My feelings toward Bill are shared by every actor in our cast. However, we have worked together all these years, so we need to have some kind of modus operandi, and we have one. We’re still doing Star Trek conventions together, so when I see him, I say, “Hi, Bill, how are you?” He says, “Fine, George, how are you?” So we have a working relationship.

Yet Leonard Nimoy comes across as a good friend and a true straight ally in your film.

He’s very much like Spock. He’s a rational guy and a problem solver. I was given an award by the Human Rights Campaign, and they asked Leonard to present it to me. The awards were handed out in San Francisco, so he flew his own plane and came with his wife just to present that award and then flew right back. He’s a good friend.

Walter [Koenig, Star Trek’s Chekov] was the best man in our wedding, and Nichelle [Nichols, who played Uhura] was, well, the usual term is the matron of honor, but she was not comfortable playing the part of a matron, so she asked, “If Walter can be the best man, why can’t I be the best lady?” And we certainly agreed with it. She is the best lady.

You have such a lively social media presence. Why is it important to be so accessible to your fans?

One of the great rewards can be counted in dollars and cents. As I said, we were developing this musical, and we got the Old Globe Theater in San Diego to produce it, but we wanted a larger orchestra for the dimension of the sound. We had investors, but that would have stretched the budget too much so we decided to go on Indiegogo and do crowd funding. We told them the reward would be a happy dance if we reached the goal. We not only reached our goal of $50,000, but we got $158,000. So my happy dance was genuinely happy.