“We Are a Tribe”: Naomi Foner on the Mumbai Mantra Screenwriters Lab 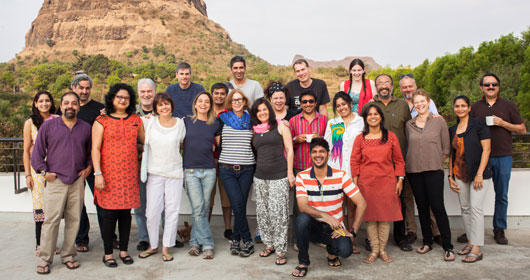 Every year, in collaboration with our hard-working partners and amazing hosts Mumbai Mantra (Mahindra), we conduct a Screenwriters Lab in India that supports eight emerging independent voices in Indian cinema. March 2014 was our third installment, and as luck would have it, this year’s lab commenced on the ancient Hindu Holi festival, which signifies the start of spring and the triumph of good over evil. The following post comes from Oscar-nominated screenwriter and veteran Sundance Institute lab advisor Naomi Foner.

India was going to be exotic and different in ways I couldn’t begin to imagine, and it was, but it was also familiar in ways I couldn’t have expected. It turns out that no matter where you go in the world, we are a tribe, bound by our common purpose to connect by telling stories.

And that the stories underline our similarities, more than they explicate our differences. We yearn the same way; for love, connection, justice and possibility. It is true that some places and conditions make these things harder to achieve. That even talking about them can land you in jail or worse.

The Indian Supreme Court recently declared consensual sex between consenting adults of the same gender illegal—punishable by life imprisonment—and yet one of our scripts had a gay transsexual at the center of its story. It is also true that one of our fellows showed a film that was due to be destroyed by police order and yet script after script challenged authority and railed at corruption.

The scripts were brave and clear-eyed, demanding the truth, even when it was risky. Borders appeared everywhere. They were violated and crossed with impunity. They wreaked havoc on people’s lives because they insist that we are different, when time after time, the lesson is not so much.

The generosity on both sides of the conversation was palpable. Great listening was accomplished. As usual, the advisors were advised; the fellows giving as much as they received. The enormous privilege of being questioned by a jury of one’s peers embraced. And the outcome, even in those short five days, already bearing fruit.

There will be movies to watch. Challenging, provocative, moving movies. They will go out into the world and stir the pot. They will “disturb the comfortable and comfort the disturbed.” And none of this takes into account, how well we were fed, how hard we danced, how poorly we slept and how many memories we made.

We rubbed colored powder on ourselves during Holi. We were tattooed with henna. We ate off banana leaves with our fingers. We had marigold petals in our hair and bindis on our foreheads. All this will wash away with a little hot water, but we left indelible impressions on each other. India won’t be a place on a map for us any more. It will be people. It will be their stories. They will be our friends.