Everything Editors Need to Know About Sundance Institute’s Summer Labs 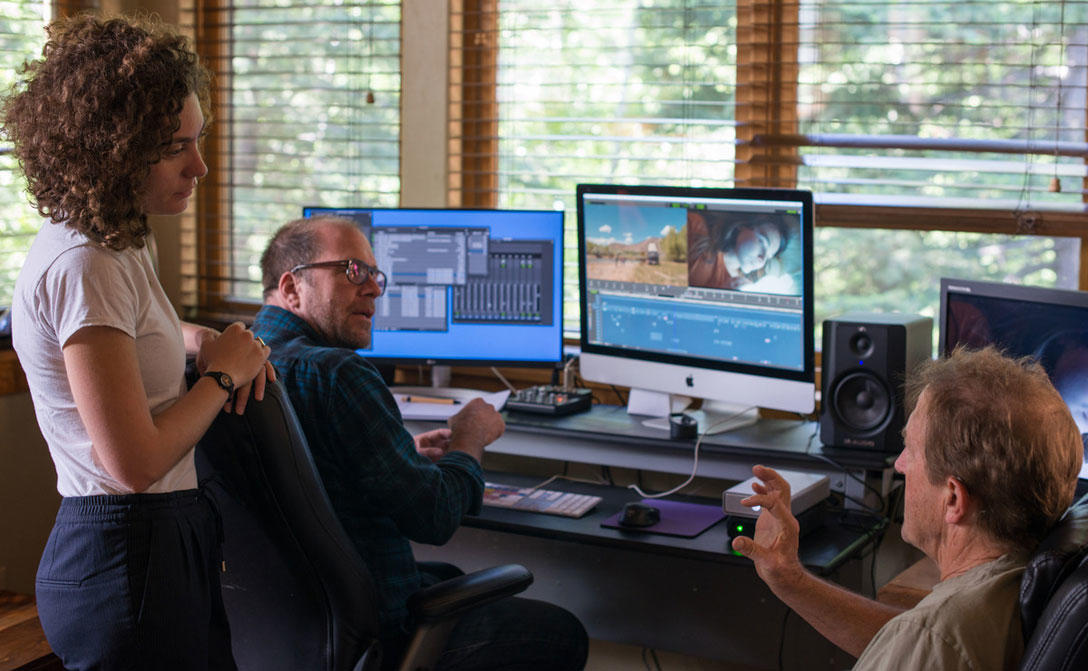 This month we’re spotlighting The Feature Film Program’s post-production support through the Sally Menke Memorial Editing Fellowship and the Editing Residency, which took place this past June in conjunction with our annual Directors Lab.

The 2018 Fellow is Kate Hackett, whose work includes Amy Adrion’s acclaimed Half the Picture, a feature documentary about women directors in Hollywood, as well as myriad fiction short films. Kate attended the 2018 Directors Lab, where she worked with two directors on scenes from their feature screenplays. She will receive a yearlong mentorship outside of the Lab, as well as associate membership with ACE.

The weeklong Editing Residency supported writer/director Ani Simon-Kennedy and editor Ron Dulin with their feature The Short History of the Long Road, and writer/director Paul Downs Colaizzo and editor Peter Teschner with their feature Brittany Runs a Marathon. The two teams worked on their picture edits with guidance from dedicated editing mentor and two-time Academy Award winner Joe Hutshing (JFK, Born on the Fourth of July, Jerry Maguire), and other creative advisors at the Lab, including editors Dylan Tichenor and Terilyn Shropshire.

Want to know what it’s like for editors at our summer labs? Here’s a peek into the Sundance Institute Directors Lab edit bay “trenches.”

Ani and Ron, you only wrapped production a few weeks before the residency. How did this impact your approach to the work?

Ani: We wrapped May 11 and arrived at the residency on June 6. Ron had been cutting as we shot, so we had an assembly a week after we wrapped.

Ron: We hadn’t done much work on the scenes themselves, and had spent most of our time playing with the structure of the film, using my first assembly cuts of the scenes. So it was very much an early work in progress when we arrived. During the Residency, we strategized with Joe Hutshing about what was most important to work on in the short period of time we had, then focused most of our attention on those areas. But in the end we did some fairly substantial work on the entire film. It was a very inspiring experience.

Paul and Peter, you were further along with your cut, but your collaboration was in the early stages. How did this impact your approach to the work at Sundance?

Paul: Peter and I had only been working together for three-and-a-half days before we became bunkmates at the lab [editor’s note: the filmmaking teams have editing bay setups in their accommodations]. We were still getting to know each other, both as people and as collaborators. What helped guide our process was that we both had such admiration and respect for the work our main editor Casey Brooks did during my initial edit in New York. Peter’s body of work is top-notch. He easily could have served as an advisor at the labs while we were there, but I was lucky enough to get him full time.

Peter: Paul and I knew we needed to address certain sections or scenes of the film that could be improved, while understanding that other parts were in really good shape. After our first Sundance screening the advisors mostly confirmed what needed to be addressed. However, they also challenged us to do better in some scenes that we felt good about….There’s no question the Sundance environment pushed us to find our film faster than we would have cutting in Los Angeles.

What were the benefits and challenges of working in the fast-paced, reactive environment of the labs?

Ani: The lab was the perfect supernova collision of everything Ron and I needed. We arrived and screened our cut that first night and were immediately given notes by mentors afterwards… It was great to get unbiased opinions from hugely talented filmmakers with no prior knowledge of the project.

Ron: We had to process and implement the notes we’d received in just a few days. The benefit of that pace is you have little time to overthink changes, and you can’t afford to fine-tune every cut. It forced us to focus on the big picture, and to strip away scenes and moments that weren’t working.

Paul: I typically find that stepping away from a project at night to get a little distance serves as a helpful step in my process, so I figured the all-consuming nature of the program would be an obstacle. But, one night at 9 p.m. I had an idea for the cut and ran to find my team so we could give it a try. The work we did that night was monumentally valuable to the evolution of the film. We were at the avid until 1 a.m.. Don’t tell the union.

Kate: [As an editor] at the Directors Lab, the structure is that you alternate between full days of work with each of your Directing Fellows. Given the tight turn-arounds (each scene is given roughly a day of edit time), you and your director are required to take risks and rely heavily on your creative instincts. The time pressure was an incubator for new and radical ideas.

Screening the work-in-progress scene for the advisors, which usually happened about halfway through our edit day, would lead to exciting new paths. I learned that there can be a real power to an early cut of a scene in terms of its ability to fuel a creative discussion. I could feel myself growing as an editor on a daily basis, becoming more economical, bolder, and quicker at solving problems.

This question is for the editors: How do you strike the balance between serving the director’s vision and infusing your own creative decisions—or are they one in the same?

Peter: I’ll give you a quote from a veteran editor I met early in my career. Dov Hoenig told me: “There is only one correct version of the film hidden in the dailies. It is the job of the editor and the director working together to find it.” This means an editor and director will have frank discussions and disagreements, but also moments of exhilaration as ideas get bounced around and chances are taken to “find the film.” When it comes together successfully it is a very satisfying process and both the director’s vision and the editor’s creativity are united.

Ron: The director’s vision is always the priority, but ideally they are one and the same. Whatever creative decisions I bring to the film are, hopefully, in the interest of finding ways realize that vision.

Kate: I’ve come to understand that each director has his or her own specific language, a particular and unique lens through which he or she sees the world. My job is to learn that language, and then to present the director with cinematic options within that language, or to suggest ways in which there may be an opportunity for that language to grow or expand. It’s not that I share a singular vision with the director, because that would allow little room for discovery, but rather that we work to develop a common system of communication and tonal and aesthetic feeling for what the film should be.

Shira: Kate, how did you approach working on two projects simultaneously?

Kate: At the beginning of each editing day I would take a moment to visualize and meditate on the project and scene ahead of me. This was before I had seen the dailies of the scene, so this was more of an exercise of remembering the emotions of the scene as they had first struck me when I read the screenplay. I knew that, given the short time and the fact that I had just come off a completely different project, it was imperative to get myself anchored in the emotional heart of the scene. Once the director arrived for her day of work, she became an even more important anchor and guide.

In this sense, I was using tools of concentration and focus that are similar to those an actor might use, when schedule requires him or her to flip between scenes that are emotionally very different.

Shira: What’s one takeaway from the Labs that you would share with an aspiring editor?

Kate: My main takeaway is “stay curious.” The culture of the Lab is one of lifelong learning and perfecting your craft. Seeing that our seasoned advisors were just as eager to learn and grow as we were was such a source of inspiration. My two directors were passionately committed to pushing themselves creatively, as were my fellow editors and all of the participants in the lab, directors, and crew alike. The experience gave me a hunger to always keep learning, and to retain a creatively provocative spirit of constantly searching, seeking artistic connection, and building new skills.

Ron: Be open to trying any and all new ideas. Even a dead end may spark a new idea for how to approach a problem.

Peter: If you get the chance to go to Sundance, go! Take advantage of the knowledge you’ll be surrounded by and seek out relationships with other aspiring filmmakers as everyone in the Sundance sphere can learn from each other. Also, you probably won’t have time to go fly fishing.

Editor’s Note: “Brittany Runs a Marathon” soft-locked picture at the end of June. “The Short History of the Long Road” team are deep in the edit and prepping their first test screening.