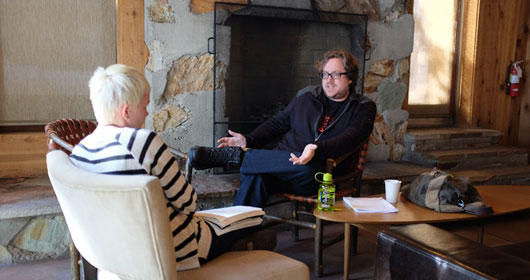 Bill Wheeler has served as a creative advisor at numerous Sundance Institute Screenwriters and Directors labs, and most recently mentored at the Screenwriters Lab at Sundance Resort. Below, he describes his experience returning to the labs each year.

My family of origin had an order of operations on Christmas morning. The awakening (pre-dawn), the parental approach (rejected), the second parental approach (rejected, but resistance weakening), parental retrieval of stockings, opening of stockings, first witnessing of the Santa-blessed tree…you get the idea. Most of the pleasure of the holiday was in the anticipation of the ritual, and in the knowledge that this magical sequence of events would be reliably the same each year.

After attending many Sundance Institute Screenwriters Labs, I have reached the point where that same limbic response gets activated when I stamp the snow off my boots to walk into the Wasatch Room on a Lab’s inaugural afternoon. I know what will happen, and the knowing fills me with happiness. There will be familiar and beloved faces, most of whom I will not have seen since the previous Lab.

Feature Film Program founding director Michelle Satter will restate the principles of the lab, the beliefs of its founder (thanks, Sundance Kid!), and its origin story. The fellows will speak in tones of awe about their presence in this place with these people (I remember this “pinch-me” feeling quite clearly from my own time as a fellow). And then a reliably similar sequence of events: the raucous and often hilarious advisor meetings, the intimate and sometimes devastating sessions with the fellows, the popcorn screenings and Owl Bar night crawls that conjoin us not just as colleagues but as people—these are the pieces that make the whole.

The Screenwriters Lab is not only a rigorous artistic process undertaken to strengthen writers and scripts. After more than 30 years, it has become a ritual of artistic purification among a community of storytellers, complete with its own liturgy, sacraments, observations and practices. I have known years filled with loss and disappointment leavened by the presence of a lab. And times too, of exultation and delight punctuated by a lab. Community members turn from young people into adults, house-holders become elders. Fellows become mentors and sometimes mentors become fellows. For a predominantly secular group, this is as close to religious practice as many of us get.

We all cry at the closing meeting. For many reasons. One 2014 Fellow wept with joy because she had never felt “important” enough to declare her commitment to a life as an artist. Her hard work at the lab had exploded the image of herself as limited by the painful circumstances of her upbringing. Advisors wept too. Many of us return to Sundance Resort fresh from battles with the mercantile bureaucracies that try to bend our stories to fit their formulas. One advisor announced he was pushing the start date to his film because he “had more work to do” on his story. The commitment to rigor is a contagion that sweeps the compound, reliably, every lab season.

I’ve come to regard my time at the labs as a passage back to my higher self. I am reminded that I write not to pay the mortgage or further careerist ambitions, but to communicate the experience of being human. Successes pass, goals change, entropy eventually conquers all—but as long as I am sentient, nothing can rob me of my ability to communicate. When I leave the labs, I inevitably forget this.

But every time I return, I remember.