​Producer to Producer: “How One Van Ride Changed My Life” 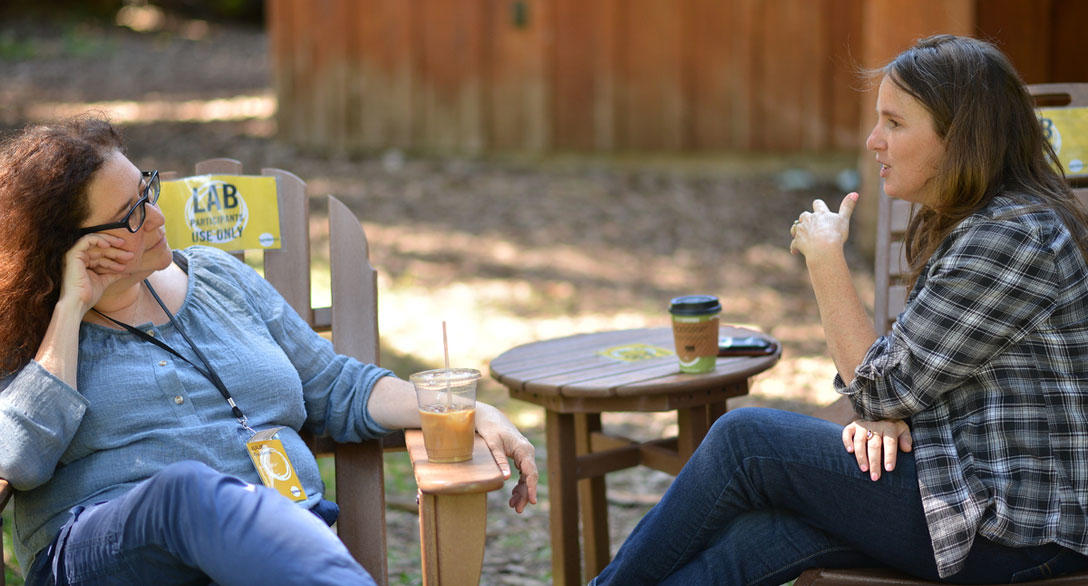 I’ve always believed there are very few life-changing moments. Instead, I have thought our journey is made up of a series of small moments that take us down twists and turns that become our story. For me, I can count on one hand the big ones—the seismic moments that I saw a shift in my being.

Most of them have been related to my personal life, like when my grandmother died, I got married, or had both of my children. I can look at those things and see how they altered me in profound ways. However, in my pursuit as an artist, more specifically a documentary filmmaker, I had never had an earthquake: tremors, for sure, but something life altering, no.

Then I was selected to be a Sundance Institute Documentary Creative Producing Fellow and began a life-changing journey up a mountain. To be clear, I knew when I was chosen how insanely lucky I was and that it would allow me access to a world I had admired from a distance. I knew I would meet the most talented filmmakers and creative thinkers; I knew I would have access to funders I had never known before. What I didn’t know was how the experience would change me.

Last summer I participated in a weeklong Lab with my other Documentary Producing Fellows, as well as the Feature Film Producing Fellows. When I arrived in Utah, I got into a van with a number of people I had never met, and we would take the ride up the mountain to where our lab would begin. I sat on that drive scared out of my mind. The loop in my head kept repeating my self-doubt, asking, “How did I end up here?” “Would they all realize I didn’t belong?”

I heard what my fellow passengers had been working on, and to say I was impressed would be putting it mildly. I sat right next to Lisa Kjerulff, who told me she had just produced The Fits, and listened as Monique Walton told me about her narrative bull riding film that I later learned was being supported by Cannes. Up in front was Leah Natasha Thomas, who I hadn’t met yet but seemed to know everyone and have her pulse on what was interesting and different. I was so intimidated. I was so scared.

As the Labs began, I got to meet my fellow Documentary Producing Fellows: Danielle Varga, Iyabo Boyd, and Leah Natasha Thomas. I think we quickly assessed each other and, at least in my mind, quickly decided we liked each other—or maybe I quickly decided I liked them. Our advisors for the week—Julie Goldman, Daniel Chalfen, Josh Penn, and Laurens Grant—joined us, alongside the Institute team of Tabitha Jackson, Kristin Feeley, Maria Clement, and Enrique Pedraza Botero.

These faces, these people, would be who I would spend an insane amount of time with for that week. And when that week was over I can truly say a metamorphosis was beginning.

To go into all the moments that began this change would take too many pages and only be interesting to me… and my mom. But the highlights were talking about career goals with Julie as I prayed for my life riding on a ski lift (I don’t like ski lifts), crying over line items while Daniel said he could get behind a producer who cares that much about a budget, or Tabitha and Julie pulling me aside before my public pitch, giving me the best pep talk I have ever received. Those are just examples of the tiny moments that revealed themselves and helped disrupt the loop in my head. Instead of asking myself “How did I end up here?” I started to sheepishly wonder, “If it wasn’t a mistake that I was here,” maybe I had “put in the work” to lead me to this place, and maybe I really did deserve this.

As the week came to a close, more people arrived on the mountain for the Creative Producing Summit. I would be pitching Bathtubs Over Broadway alongside director Dava Whisenant. Together, we had speed Labs, as the advisors prepared us to pitch our film with the goal of finding partners to bring our film home. Side note: If you want to have a bonding experience with your director, then pitch tables are filmmakers’ versions of trust falls.

If you start to feel yourself wavering, you just have to trust your partner is there to catch you and keep moving the pitch forward. From my memory, Dava and I always caught each other and that trust has carried us through as we work to complete the heartwarming, musical comedy/documentary (I just love saying that because, well, most of our work as documentary filmmakers can fall on the sadder side).

Our final time on the mountain was spent experiencing a hilariously collective cry fest that I can’t really go into. And hen the week was over, but this time I got in a van with new friends. I was so busy enjoying the ride I forgot to doubt myself; I forgot to doubt my experience. When I arrived home, I wondered what else would come my way? How would I build on that weeklong experience?

All I knew was that I had a year fellowship and that time on the mountain invigorated and inspired me to make sure I extracted everything I possibly could from it. If Sundance was going to be there to help me, well then I was going to ask for help. And I did. Just ask Kristin: I have probably emailed her hundreds of times and somehow she has always answered me, which I find amazing since I know I am not the only one emailing her hundreds of times.

The thing is, I dove in. I made career goals. Big ones. Most of my life I had kept my ambitions secret, fearing that if I failed after acknowledging them to others it would somehow be more painful. But I decided to ignore that shit and make as many inroads as I could to get there. So I made a list: I knew I wanted Bathtubs Over Broadway to get full funding. I knew I wanted to take on more innovative feature documentaries. I knew I wanted those films to premiere at major festivals and get distribution. I knew I wanted my company Giving Voice Films to become a sustainable entity for me.

And I knew I wanted to work with people I looked up to and admired so that I could grow and reach their height. These were the things I wanted to work towards for the year and I told this to Sundance, my advisors, and my other fellows so that they would all hold me accountable. Because I also knew that being me, I would be plagued with self-doubt and fear, but that when I faltered, I had them to turn to and encourage me to continue to dream, to continue to try. And they did. They were always there for me.

Throughout the year we had other workshops, I went to the Sundance Film Festival, I continued to meet new people I admired and deepened my relationships with those whom I met on the mountain that first week.

Now the fellowship year has come to an end and I can truly say this experience was life-changing. Yes, it was a series of small events that took place over the year, but they all happened because of this fellowship. This fellowship was a seismic event in my creative life and I can see how my course was altered. I still have many moments of fear and self-doubt but when those come, I remind myself there are people out there who believe in me and if they can, then I can find a way too as well.

I wish everyone could know that support in whatever field or life they choose, and for that person taking the ride up for the first time, I am so excited for what awaits you.