Native American Filmmakers on the Importance of Representation in Hollywood 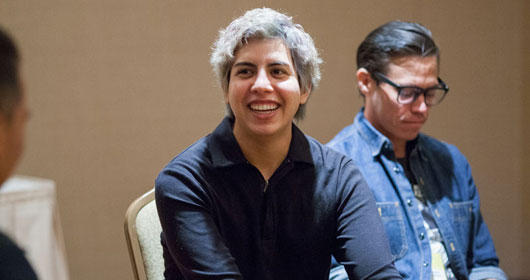 “The Coyote Way” by Missy Whiteman

Last month, the Sundance Institute Native American and Indigenous Program kicked off its annual fellowship with a rigorous four-day workshop on the homelands of the Mescalero Apache Tribe in New Mexico. In May, we chatted with Native Hawaiian filmmaker Christopher Kahunahana (Karaoke Kings) and Carmen Tsabetsaye (Puebloan in Praha) about their respective projects and their orientations as Native and Indigenous artists. Now we round out our coverage by exploring two disparate stories from fellows Daniel Flores and Missy Whiteman, both of which straddle issues of gender identity, depression, and the challenges of reclaiming Native American storytelling.

Can you offer a brief description of your project and your personal connection to this story?

Daniel Flores: Viva Diva is about a trans girl named Diva on a quest for a reason to live. She faces an ever-present state of depression when she discovers she has a disease. Feeling resentful of her father and family for not giving her the resources to deal with it all, she decides to face them and confront her past so that she can accept her future.

Right now, I’m modifying the story to make it better but keeping it very close to that description. I began writing this story as a challenge to myself. I wanted to tell a story brand-new to me and as far from myself as I could. But it came back at me like a boomerang! I’m at a place now where I am taking more and more from my own experiences and giving them to Diva.

Missy Whiteman: (Going) Back Home is the first short film in The Coyote Way Trilogy about a young boy, his time-traveling bicycle, and the choice he must make that will alter his past life and future life. (Going) Back Home
is rooted in the traditional Native American trickster stories, while
recreating a story that balances elements of the metaphysical and
illusion into contemporary human existence.

Growing up, I was told that
in my lifetime I would see our ancient ancestors reborn as our children
in order to help our people heal and reclaim our ways. I see this alive
in many of the young people who have come into my life, and also within
my own children. Film has the power to connect with them because they
are digital natives raised with technology.

What are the origins of your interest in filmmaking?

DF: When I was a child, I was always enthralled by fantasy. I was completely taken by an anime series called Sailor Moon. It captured my attention like nothing else could. My search for filmmaking began then. I looked for what would allow me to tell stories in a similar visual way.

MW: I remember watching Francis Ford Coppola’s The Outsiders
at a very young age. The connection I felt to the characters as well as
the storyline was something I had never felt before while watching
movies. This experience introduced me to a different way of seeing the
world, and it awakened something within my psyche. I began to think of
the world around me in relation to a visual narrative.

Often
I would notice how certain environments were lit—or people who could be
great characters in a movie. I can remember walking across the
playground, listening to the sounds of my friends playing, and saying to
myself, “If I were to begin to tell my story in a movie, it would start
with blackness. We would hear only the sound of the playground and of
feet walking at first, and then slowly my feet and legs would be shown
walking across the playground.” The vision I developed when I was
younger never went away.

How has your Native heritage influenced or ignited your desire to tell stories through film?

DF: My family’s history traces back into the Yaqui of Sonora, Mexico. My uncle and grandmother have collected marriage certificates and census records for many years. Currently they are figuring out a connection we may have to Mickey Free. Being with them while they spoke of our family’s roots was the impetus for me centering the story on a Native character. My family’s roots are very important to me. Storytelling could be defined for me as being my own search for understanding and meaning in life.

MW: For me, filmmaking is very much a process that relies on
one’s artistic vision. One of the most important teachings my
father passed down to me is that in the Arapaho way, there is no word for
art. A long time ago, the people we view as artists were viewed as
sacred people and treated with a high level of respect. The creative process was a ceremony, and what was
created was not ornamental or entertainment, but rather a message from
the spirit world and/or the creator. I feel this to be true from the depths of origins of
the stories that are within the films I create. Something that is
older than time and from the depths of our people’s creation.

Is there a film or director that you identify as having spurred your interest in film?

DF: My interest in being an auteur began when I met my first. His name is Michael Markowsky, and he was a teacher of mine. Shirley Temple films remain favorites of mine. I also absolutely love the works of Darren Aronofsky, Hideaki Anno, and Lars von Trier.

MW: The moment that made me say to myself, “I want to make films,” was around the time Chris Eyre’s Smoke Signals
came out. Before that, I could only fantasize about what it might be like to
be involved in the movie industry. I could not walk through the door,
let alone step in the direction of becoming a filmmaker. There were no
filmmakers who were Native in the mainstream until Chris busted through
those doors, and then “bam,” the door was wide open for the rest of us
daydreamers.

During my first year in film school, I had the privilege and honor to attend the Minneapolis screening of Skins
during his “Rolling Rez” tour. I was blown away by the Cine-transformer
theater with a built-in concession stand, and even more in awe that
the director was available to talk with after the screening. I was
nervous to approach him, and when I finally saw an in, I introduced
myself. He was warm, genuine, and had so much wisdom and
knowledge to share with me. We visited for quite a while that day. I
would not call that day a “spurred interest in film” but rather a “soul
ignition” that altered my intentions of wanting to be a filmmaker to
becoming a filmmaker.