How the Theatre Lab Disrupts the Echo Chamber with New Voices 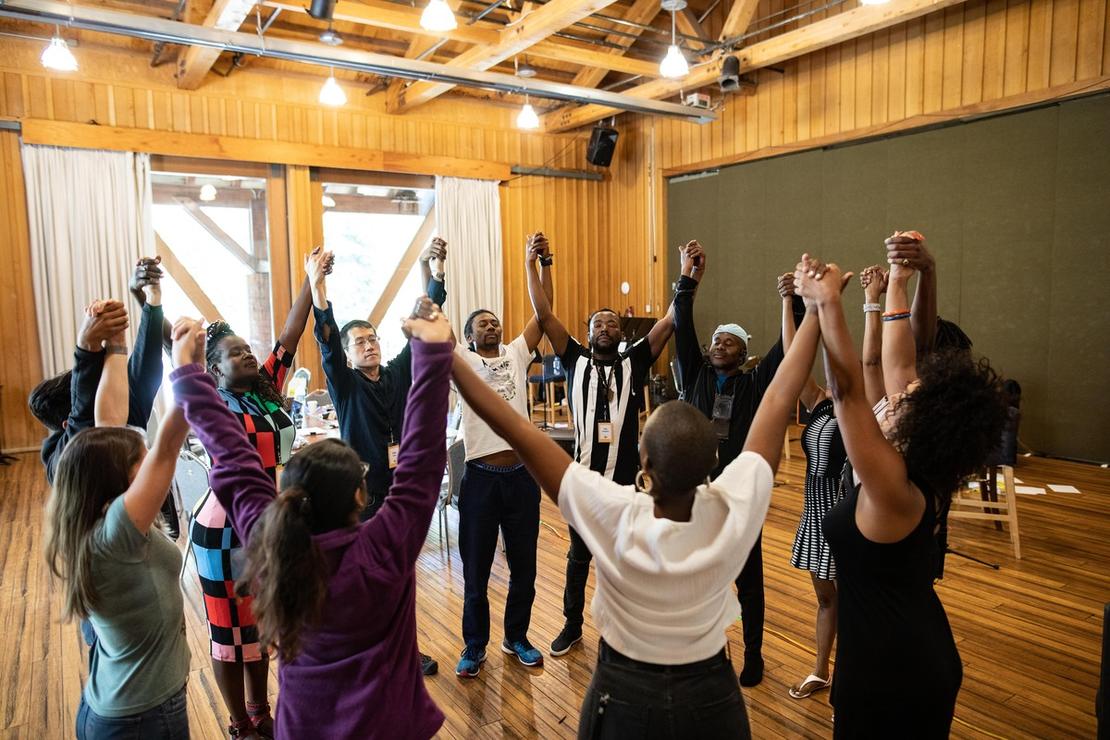 Actors at the Theatre Lab warm up before working on ‘Dreaming Zenzile,’ written by Somi Kakoma and directed by Lileana Blain-Cruz. © 2019 Sundance Institute | Photo by Jen Fairchild

Adam Ashraf Elsayigh is a playwright, translator, producer, and independent scholar who splits his time between Cairo and New York. Adam has recently contributed to our creative communities at our Theatre Labs at both the Sundance Mountain Resort and MASS MoCA.

The application for the 2020 Theatre Lab is now open and is available in English, French, and Arabic.

It was lunchtime on the second day of the 2019 Sundance Institute Theatre Lab, and I was eating a delicious plate of muhammara, a Syrian walnut spread, with pita bread when artist in residence Dima Matta asked me, “So where’s home for you?”

Having grown up between cultures in Cairo, Dubai, and New York, I always dread that inevitable first question, as I’m never quite sure how to answer it. But in the split second before answering her, I looked around the table and saw composers, pianists, directors, dramaturges, and actors from Japan, Egypt, Syria, Connecticut, South Africa, and Puerto Rico. I heard English, Spanish, Arabic, and a language I didn’t quite recognize. I looked at Dima and realized that she herself had lived between places at different times.

“Well, my family is Egyptian, but they migrated to Dubai for work when I was a toddler. I did my undergrad at NYU Abu Dhabi, but now I’m based in New York.” She smiled. I saw recognition in her eyes. In the following days, I learned more about the other lab projects, hailing from Puerto Rico, South Africa, India, Lebanon, Palestine, and Egypt. I found myself learning alongside engaged artists, trying to make meaning and understand work across borders.

In an American theatre landscape where the artists in the room frequently come from similar training backgrounds, the Sundance Institute Theatre Program invites difference. The lab dedicates its resources—through its current commitment to artists from the Middle East and North Africa, for instance—to finding artists who are breaking the conventional boundaries of craft or storytelling. Whether it’s an actor whose training was in a different language, a surgeon who became a nationwide sensation and standup comic (true story), or two comedians with a clowning background, everybody I met at the Theatre Lab had a unique and interesting story to tell. The lab became an environment for growth where one could learn something new across disciplines, engage with different styles of theatre making, or interrogate their own process and practice. I found myself saying “You know, I’ve never actually thought about that” at least once during every meal.

As a stage manager and translator at the lab, I watched how an American director—Oliver Butler, who doesn’t speak Arabic—directed a room where everybody spoke English as a foreign language. Working on developing a three-act comedy in translation for an American audience, Khawla Ibrahim’s London-Jenin, in a room with six other artists who all come from a different culture, language, experience, and performance training background was no small feat. Yet, it allowed each of us to begin to interrogate language, dramatic structure, and theatre making in ways that we will all take into our own arts practice beyond the lab.

As we would attempt to make meaning of a sentence that had just been translated into English, we would find a more poetic way to say it. We would start to wonder why the structure of a sentence that communicates a particular meaning is different in English than in Arabic, and how each differs in meaning. We would wonder how to communicate context to an American audience without exposition. It is these little revelations and explorations that I most remember from this experience. They are revelations I don’t have every day in my art practice—ones that can only be found in that space of difference, that space of alienation that invites growth.

This growth, unlearning of biases and assumptions, and learning of culture across borders transcends beyond the artists and makers of new work. In a time when such intervention is most needed, Sundance Institute’s initiatives allow for new work that asks audiences to look beyond walls and borders. It invites audiences to ask themselves, “What does it look like to be on the other side of here? How am I passive, or engaged, or complicit? What can I do differently?” It allows audiences to see stories that have not been brought to the forefront for the first time, or maybe hear an old story from a new lens.

Theatre is a place for nuance. It is a place for conversation and inciting discourse. In 2019, a zeitgeist and discourse that is insulated among itself will only produce a cacophony of voices that are no more than an echo chamber. I’m grateful for Sundance Institute because it disrupts that chamber with new voices—ones that bring dimension and nuance to the conversations we need to be having in the American theatre today.