A Former U.S. Soldier Hones Her Script at the Sundance Screenwriters Lab 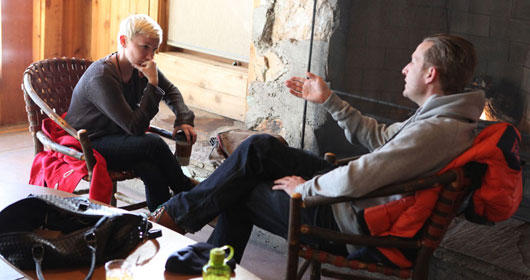 Nicole Riegel is a 2014 January Screenwriters Lab Fellow whose project Lynch tells the story of an American P.O.W. who embarks on a quest to uncover the truth of her captivity. Originally from Ohio, Riegel is now based in Los Angeles. Prior to writing, she served as a soldier in the United States Army.

As I walked through frozen woods beneath the snowcapped mountains with Tobias Lindholm, a sad thought crossed my mind: I leave tomorrow. At that point, I was both emotionally exhausted and energized at the same time. I had spent four days excavating new layers of a character for my story Lynch and I was doing so side by side with one of my favorite artists.

At the January Screenwriters Lab, I attempted to separate myself from the real life person I’m writing about. I was pushed to do the most difficult thing a person can do while writing a biopic: to find my voice within my subject’s voice. I care so deeply about my subject that I lived in fear that she would hate me for exposing her. I had to divorce myself from her and learn that ignoring her flaws actually does a great disservice to the person because it’s not human. On this particular day, creative advisor Tobias Lindholm (The Hunt, A Hijacking) and I approached my story from an aerial view.

As we walked deeper through the winding paths, the conversation shifted to a conversation about our personal views of the world. We talked about Tobias’ rebellious youth and how that led him to writing. I immediately connected with him and realized that we view the world in similar terms.

We entered a busier area of the path at the Sundance Resort, surrounded by skiers, tourists and other writers, but those voices were quieted by how easily we were opening up to one another. It was a soothing walk with coffee and cigarettes as we drifted in and out of topics in an invigorating, effortless way. We talked about his films, Thomas Vinterberg (a director with whom he often collaborates), and our shared frustrations with storytelling and our lives while easing our way back into the challenges of Lynch.

On this walk, there was no story too dark. No marketplace to judge us. We didn’t cut out the sloppy parts of life, we embraced them. Everything was fluid, open, messy and imperfect.

As our walk ended and we headed back to the warm lodge, I felt an enormous weight lifted from my shoulders. We sat down beside the fireplace and Tobias began walking me through his next project that is set in a military world. The very fact that he wanted the opinion from a former soldier was heartening as it reminded me that my experience in the Army was of value in telling my story. That was the very moment that I learned to bet on myself again. To bet on the tragic, raw darkness that is my voice just as Tobias bets on his.

The Labs knocked me down and cut me open in a thousand different ways and helped me regain my courage to tell this controversial story. It was a safe space where strangers became family through shared laughter and pain. It was a process through which to think about what I want to say about the world in this project and beyond it. Before the walk, I felt smothered by loud opinions from Hollywood, about the kinds of stories I should be telling and I felt alone with this story and lost in how to tell it.

Tobias Lindholm, Bill Wheeler, Naomi Foner, and Marti Noxon refused to let this story fail. They refused to let me fail. In a collective effort, they spent several days poking, probing and dissecting me in order to transpose more of myself into a character. I could have listened to Tobias tell ten more stories as we sat tucked away in the mountains at Sundance because this is truly the place where misfits fit. To me, that’s Sundance.