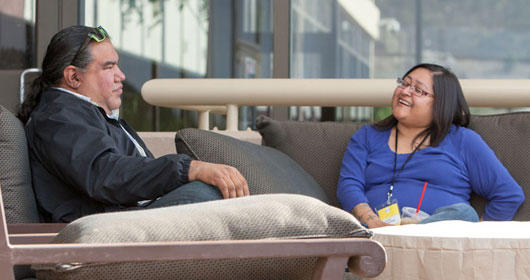 Last week the Sundance Institute Native American and Indigenous Program kicked of its annual fellowship with an intensive four-day workshop on the homelands of the Mescalero Apache Tribe in New Mexico. In our second encounter with this year’s fellows, we chatted with filmmaker Carmen Tsabetsaye (Zuni/Zia Pueblo) about the therapeutic possibilities in filmmaking, how tragedy has informed her project Puebloan in Praha, and the international misconceptions about native cultures in America.

Can you offer a brief description of your project and your personal connection to—or why you’re compelled to tell—this story?

My project is Puebloan in Praha, and it is the story or a young pueblo girl who moves to Prague after the death of her brother. While in Prague she must deal with his death, leaving home, and cultivates a new sense of family that ultimately helps her heal from his death.

The story is very personal to me. While traveling through Prague in the summer of 2012, I found out a very close friend of mine died. He was a young native man with so much potential and who always wanted to travel. Something I did on a regular basis was a dream for him. I had a hard time dealing with his death while I was there, and it hit me very hard. I just had this feeling like I left him behind.

I had so many pent-up feelings that I wrote a short script while in Prague. I returned home in November 2012, and in June 2013, my own brother passed away due to a freak accident. My story has evolved since I first wrote it as a short, but it’s about how we deal with death and move on from it. Personally, for me it’s filmmaking as therapy.

What are the origins of your interest in filmmaking?

As a child, I was always imaginative and would often make up my own stories. Then as a teenager, I fell in love with watching films. Our whole family would go to the video store on Friday nights, each pick a movie and spend the weekend watching them over and over again. Growing up in New Mexico, I thought it would be so cool to make movies, but it never seemed like a real possibility.

But a seed was planted when I saw my older brother in an episode of Walker, Texas Ranger. He was really just an extra, a pueblo guy with long hair and braids dressed in buckskin handing Chuck Norris his horse. The want to make films was always there, but I didn’t really make up my mind until attending the University of New Mexico.

How has your Native heritage influenced or ignited that desire to tell stories through film?

I come from two very traditional Pueblos (Zuni/Zia) that are managing to maintain their cultures – they practice their religions, live traditional lives, and speak their languages. I am surrounded by this living, breathing culture which doesn’t necessitate a need for me to document it.

The idea that I don’t have to document my culture is something you probably don’t hear from many native/native-themed films and filmmakers. I feel like there is a sense of freedom in my storytelling because I can write modern stories and native protagonists without any restrictions. My native heritage does influence my characters and their experiences, because no matter where they go in their stories they are always native.

The greatest impact on me even more so than my culture, is the amount of traveling I have done. When I go different places, the one thing that has always bothered me is that the rest of the world doesn’t have a clue that we are still here. I’ve heard things like, “The U.S. doesn’t have an original culture,” “All the original Americans are gone,” or “You don’t look American.”

Yes, there a few people that have a general interest in us and know we are still here. But for many people, we don’t even exist anymore. That affects me more than anything else. When I write stories, I like to put native people in a modern and global context so that maybe the rest of the world will know that we are still here living alongside them.

Is there a film or director that you identify as having spurred your interest in film?

The film and director that has stuck with me the longest is Wong Kar Wai and Chungking Express. I saw this film as a teenager, fell in love with its energy, and can still watch it over and over again. Wong Kar Wai also showed me that other worlds exist.