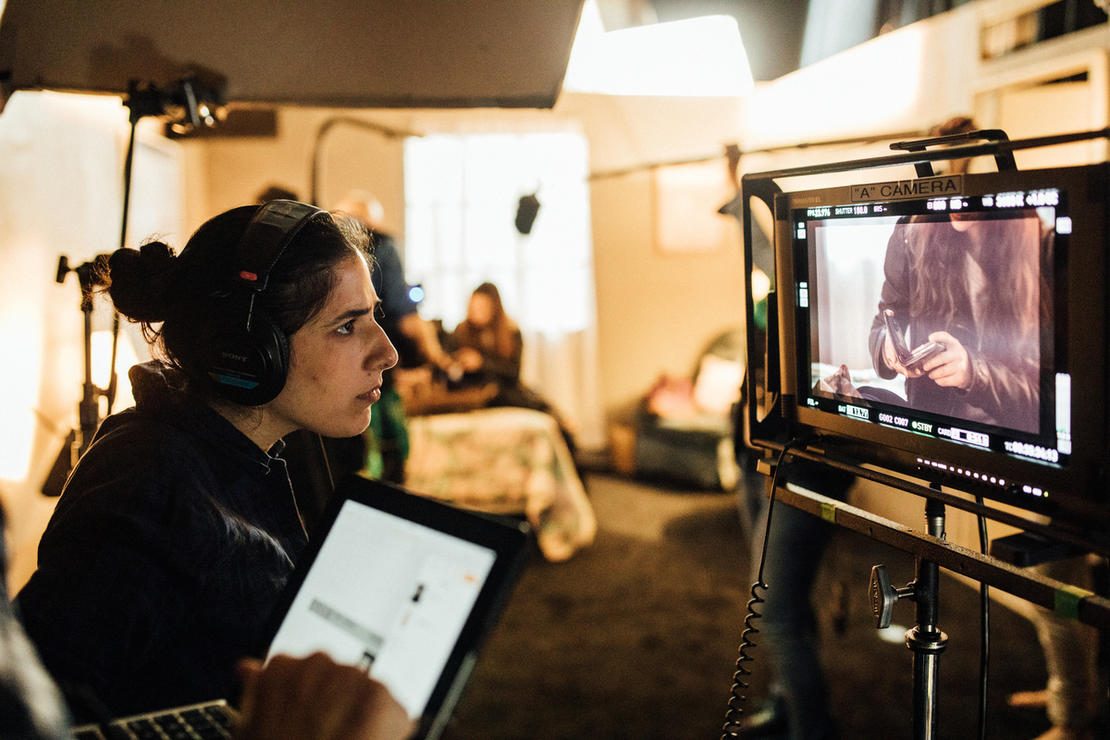 What’s it like going through Sundance Institute’s signature summer labs? We caught up with a few of the 2019 Directors Lab fellows to get their quick takes on what it was like to fine-tune their projects with support from world-renowned creative advisors and fellow directors in the Utah mountains.

Joey Ally stars in her musical, surrealist project The Hater as Dorothy, who gets fired for her liberal extremist views and retreats to her conservative Texas hometown, where she ends up going undercover as a Republican to run against her childhood bully for state congress. Before this project, Joey most recently wrote and starred in Are You Still Singing? for Turner and Refinery29’s Shatterbox Anthology.

Everywhere you go, every day, you are surrounded by people whose creativity and commitment to craft make everything feel important and new. I was so impacted, especially, by the other fellows and their phenomenal talent and humanity.

JA: I went to the lab wanting to explore the tone of this film, which extends past the prior realism boundaries I’ve worked inside of on other projects. I was concerned everything wouldn’t meld, but the labs encourage you to take risks and push yourself without fear of failure. Without the responsibility of producing a polished product, I tried so many things I’ve been wanting to try for years—from working more heavily in oners to a musical number that dips in and out of surrealism without cutting.

I learned that leaning into my instincts without expending energy on covering myself, or having ample options for the cut, did create more nuanced, unique, and exciting scenes—which all work together, because they’re all coming from the same sensibilities. learned if I dig into my instincts, I’ll always be able to dig my way out.

Kobi Libii, known for such acting credits as Transparent, Girls, and Jessica Jones, came to the Directors Lab with The American Society of Magical Negroes: Omar, a young black man, is recruited into an undercover society of Magical Negroes who secretly conjure literal magic to make white people’s lives easier. Once he realizes they are using supernatural means to do the very thing he’s felt obligated to do his whole life, he attempts to buck the system and put his own dreams first.

*The shots were in focus, but the experience was a blur.

KL: My biggest takeaway from the lab isn’t something any one advisor said, but the unspoken value all of the advisors shared. While they each had different sensibilities and areas of expertise, there was a common reverence among them for what I’ll call The Thing. The Thing might be a moment, a shot, a line, a whole story; it can be many different, well, things. But what makes it THE Thing is that when artists—real artists—see it, they feel an immediate, unnamable urgency that The Thing in question needs to be in the world.

So much of my lab experience was watching world-class artists chase The Thing. They hunted for it when it wasn’t there; they were giddy when they had a notion of how they might track it down; they lit up when they finally saw it arrive. Each advisor had their own method of pursuing The Thing, but more instructive than any of their specific processes was their unspoken consensus that the search for The Thing is the fundamental building block of making stuff. I have always had an intimate, passionate, bedeviling relationship to The Thing. The lab showed me that these artists who’ve been at the top of their fields longer than I’ve been alive do too. It’s profoundly orienting to know that we’re on the same hunt.

Dionne Edwards’s Pretty Red Dress is the London-based story of Travis, a black man newly released from prison whose already-turbulent home life is sent spinning when his girlfriend and androgynous daughter discover him cross-dressing. Dionne’s previous directing credits include the award-winning short film We Love Moses, That Girl for Channel 4’s On the Edge series, and second unit on the third series of Netflix’s Top Boy.

Emotional—because the lab is a rollercoaster, a huge challenge, a place where every day you feel vulnerable yet hugely nurtured and supported. All us fellows grew extremely close, and there were often tears, whether of joy, frustration, or not wanting the experience to end.

Invaluable and formative—because I learned so much about myself as a director. I learned that I often stand in my own way and that I need to trust more in myself and in the process.

DE: I’m not the most analytical person; I work in quite an intuitive way, and that can only get you so far. At the labs I learned that I need to dig a lot deeper as a writer and director and do a lot of investigative work in all my scenes so that I understand all of the characters’ intentions really well and can get specific. I learned that directing is not just about designing shots and thinking of a few directions to give to actors; it’s really about being the keeper of the story and knowing the story inside out so that it can be told in the best way.

Barbara Cigarroa’s El Otro Lado (The Other Side), set in Texas during the child migration crisis, follows a low-income Mexican American teen named Lucy as she is confronted with her own need for escape when her father decides to sponsor two undocumented minors for money. Barbara’s previous work includes the short films Dios Nunca Muere and the award-winning Marta Rosa.

BC: Family, bravery, and responsibility.

Prior to the lab, I had been living in a writing cave, with my own isolated fears and desires for the project. Upon setting foot on the mountain, there was an immediate sense of family and safety—and no longer did I feel so alone. Sundance encouraged and inspired bravery, and the responsibility to own my vision and to believe in my own unique process of doing that.

BC: As a filmmaker, I often get overwhelmed when thinking about the infinite roles that come with putting on that director’s hat. While at the lab, however, I was able to shift my thinking around what it meant to be a director, and I began to understand that rather than feeling I need to be able to do it all, I have two essential roles: first, to be the protector of the story—its world and its characters—and second (and I return to this whenever the scope of making a feature film hits me), to inspire and communicate the passion and vision I have for the film in others. If I do just that, then I am doing my job. Reframing this thinking has been incredibly liberating and inspiring, and it has allowed me to approach production—and the challenges I might be faced with—with much more freedom and excitement.