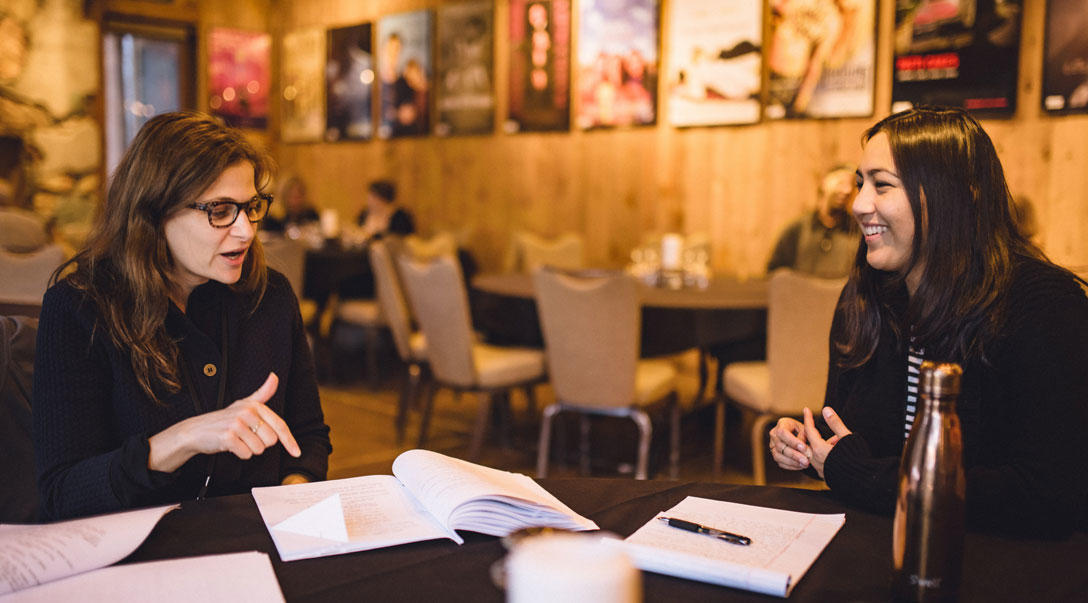 Beth de Araújo is a Los Angeles–based writer/director who was recently featured in Filmmaker Magazine‘s 25 New Faces of Independent Film. She was selected for the 2018 Asian American Fellowship, and attended both the Screenwriters Intensive and the Screenwriters Lab with her feature screenplay Josephine, which will mark her feature directorial debut.

Trying to analyze what I wanted my first feature to be was a daunting task. It’s an important decision for any writer/director, but that thought was causing me to have complete writer’s block, which I had never experienced before in my life. I thought it was a myth or something someone said when they were actually just being lazy. It’s very real and very frustrating because passion cannot be forced.

One night I went to see a movie at the Egyptian Theater on Hollywood Boulevard. When the lights went down, the man next to me—a stranger—groped me during the film. This upsetting incident pushed a memory to the forefront of my mind that had been living inside of me for many years.

The next morning, I started writing Josephine, my feature script. Normally I outline scrupulously, but pages were flowing, and I didn’t want to regulate that, so I let everything pour out of me onto the page. The first draft was 70 pages, and I wrote it in a month. I think it was waiting to come out and was finally given the space to do so when I was triggered at the theater. Josephine follows an 8-year-old girl after she witnesses a rape and is plunged into a maelstrom of fear and paranoia, acting out with increasing violence as she searches for a way to regain control of her own safety.

I wrote another 20 pages of fluff just so that I could apply to the Sundance Institute Screenwriters Lab with a 90-page script. I knew the script needed lots of development, and I wanted mentorship to help guide me through it. I felt like I had tapped into something honest, but I knew the script was a hot mess. The plot was all over the place. That iteration of this script contained moments that I saw so clearly, but it was like a string of visual vignettes that inspired me.

I was invited by Sundance Institute to the Screenwriters Intensive, a two-day lab in Los Angeles. My creative advisors and I discussed how I could structure a fully realized story with the moments I had built. And while I expected and hoped that that’s what we’d talk about, I was genuinely taken aback by how hard it was to talk about this story out loud. This proved to be one of the (now) many times I’ve had to do this. I think sometimes we artists write down the things that are challenging for us to say out loud, but we exist in an industry where you have to be able to articulate those ideas to many different people. The Screenwriters Intensive turned out to be a great, safe space to start practicing this.

The next draft took me nine months to write and, in my opinion, that script is almost unrecognizable to the first draft. I shared the new draft and was shocked and elated to be invited to participate in the Screenwriters Lab, a five-day-long residency. My script was in a different phase at that point, and I was eager to have conversations with advisors that were much more specific and less about the broad strokes.

At the Screenwriters Lab, each advisor asked me what I was trying to say with this piece, and I couldn’t answer them. This was reflected in my lack of an ending. One even pointed out to me, “You wrote four different endings in four different scenes.” I couldn’t pick an ending because I didn’t know what I wanted to leave the audience with.

Then Andrea Berloff said to me, “The beautiful thing about storytelling is that you get to write the ending you want.” After that, I knew how I wanted to tweak my character arcs to get me to the ending I wanted. Much of the focus of Josephine in the lab became about attaching theme to my characters’ progressions. I had focused so intently on distancing Josephine from the real story during those nine months of rewriting that now I needed to tap back into the raw emotions of why I started writing it in the first place.

The central emotional relationship in my script is one of a daughter and father. During the lab, Jessie Nelson, writer/director of I Am Sam, gave me invaluable insight into her experience directing father-daughter scenes with Sean Penn and Dakota Fanning. We brainstormed about restructuring scenes so that my young actor could lean more on the experience of the older actor. Currently at the final stages of development and with a clear eye on pre-production, I cherish her shared knowledge and insights. It’s helping guide me tremendously at this stage in the filmmaking process.

I’m embarking on making a movie with every single industry faux pas—working with children and animals, a story that involves sexual violence, casting Asian Americans in leading roles, and yet never once was I discouraged at the labs from making these decisions. In fact, I had quite the opposite experience. I was constantly encouraged to stay true to my vision of Josephine. It’s a deeply valuable piece of advice that I hope to hold onto as I progress and move through this industry.