“Be Brave and Experiment”: Lab Fellows Share 5 Ways to Hone Your Composing Skills 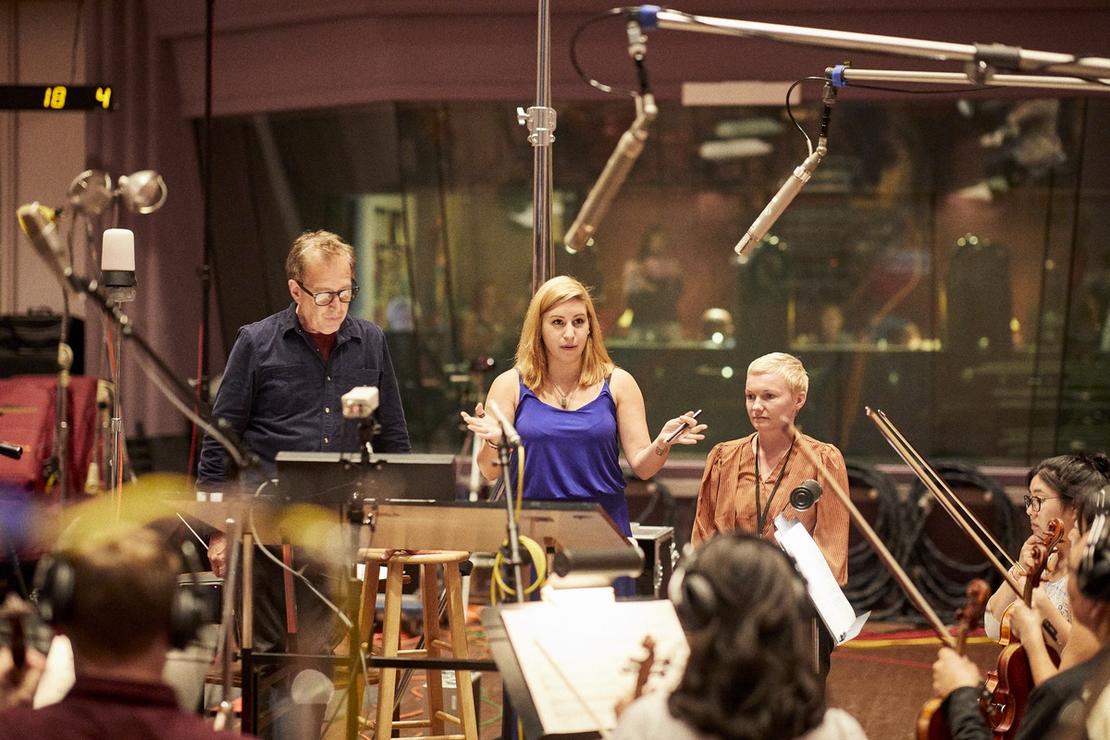 From graceful piano notes to frenzied violins—what would a film be without a powerful score? Music is a vital part of both fiction and documentary filmmaking, and that’s why Sundance Institute’s Film Music Program empowers aspiring film composers through an annual Music and Sound Design Lab.

This year’s lab took place for two weeks in July at Skywalker Sound in Marin County, California. Each composer was assigned either a fiction or documentary film project and then collaborated one-on-one with their project’s director to score a selection of scenes, with guidance from experienced advisors in both the film music and directing fields.

We asked a few of the composers what this year’s lab was like: multi-instrumentalist Gene Back, whose work ranges from classical string quartets to ambient electronic tracks and includes the score for an upcoming Netflix Originals series and Burning Man: The Musical; Aska Matsumiya, whose composing credits include Selah and the Spades, Words from a Bear, Skate Kitchen, That One Day, and Separating Ourselves, among others; and Emily Rice, a cellist and the first composer to be awarded a BAFTA LA scholarship whose previous work includes 100 Years from Home, Self-Taught, and Mr. Malcolm’s List.

Here’s what they had to say about their lab experience that they’ll take with them in their future work.

Emily: I always start a project with a conversation with the director about what they’re trying to achieve, both in the film overall and in specific scenes that may be particular pressure points within the story. After that, I begin tackling the music within the director’s framework and see where we land! I’ll also communicate if I feel a certain direction isn’t working and I’ll try and explain why—I think being able to have that dialogue is very important. It lets a team uncover the potential of the score together.

Aska: There’s always space for you to share your taste and style to build something new with the director. It’s kind of like starting a romantic relationship: you both come from different worlds and as you merge, you find your own new world that you can share and build on.

Gene: Working on a team is made so much easier if everyone on the team has mutual respect for each other. Sure, feelings and egos might get hurt from time to time, and we don’t necessarily have to be each other’s best friends, but as long as that baseline respect is there, it can be a very rewarding experience. And if everyone on the team actually truly enjoys each other’s company, then you can challenge each other to be as creative as possible—and the possibilities are absolutely limitless.

Gene: The lab was one of the most challenging two weeks I’ve ever had in my life. I was asked to perform, execute, and deliver under what were sometimes extremely challenging circumstances—but knowing that I was able to do it has given me confidence. I know now that I can push myself to creative/professional levels I didn’t think were achievable before. That gives me the power to walk into any room, with any director, any studio, and say to myself, “I got this.”

3. It’s all about the details.

Emily: During the lab, I worked on a particular film that posed interesting challenges. The film is very personal to the director, and we were always treading a fine line between several conflicting emotions. When we tackled the opening scene (which flowed directly into the main title), we had to discover an extremely specific musical tone.

Aska: Working with my team of advisors opened up so many different perspectives of film scoring for me—things I hadn’t paid attention to, like how important the film’s story is for composing. I learned that getting closer to the characters and story is so important for building your music story with the film.

Gene: The lab was about digging really deep, not just settling for 85 percent. Getting that extra 15 percent is what we were after—and that could be the difference between a few notes. It’s all about letting the music serve the picture perfectly. And this is what kept me up at night. I would question whether I really had it in me, mentally and creatively, to complete that last stretch. Ultimately, thanks to my advisors, I made it out alive.

4. Be brave and experiment.

Gene: The film that I worked on during the lab was a hybrid documentary, where documentary footage is seamlessly accompanied by dramatizations. It was unlike anything I’ve ever worked on or seen—at first, I wasn’t even sure I was watching a documentary. As I watched, I realized it was going to be exactly the challenge I signed up for when I applied to the lab in the first place. I’ll admit that I had that “oh shit” moment where I wasn’t sure how I was going to pull this off. Luckily it turned into “OK, bring it on.” The project forced me to go beyond my comfort zone in ways I never thought possible.

Emily: That’s one major takeaway from the lab: from now on, I’ll take the time to experiment as much as I can before moving forward with an idea.

5. Remember to love what you do.

Gene: One night during the lab, some of the other composers and I found ourselves in an impromptu jam session. We were on the main scoring stage, just making music together on the spot. All of us totally let loose. You could tell there was something really special happening on that stage—a profound energy. It reminded me of why I do what I do in the first place: the simple joy that comes from speaking and loving through music.