A Question Every Screenwriter and Director Should Ask Themselves: “Whose Story Is This?” 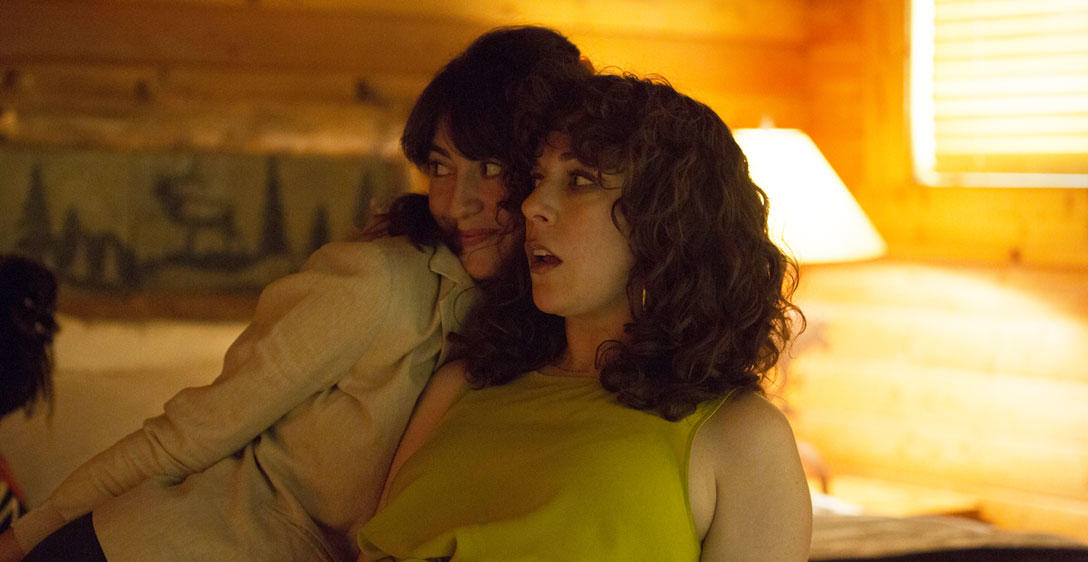 Hannah Pearl Utt (co-writer/director) and Jen Tullock(co-writer) attended the 2017 Directors and Screenwriters Labs with their project “Stupid Happy,” which follows dysfunctional, codependent sisters Rachel and Jackie who believe they are orphans after the death of their father, only to find out the mother they thought died when they were young is not just alive, but the star of their favorite soap.

“Whose story is this?”

Hannah: That was the first thing Joan Tewkesbury asked me when I sat down for my first advisor meeting of the first week of the Sundance Institute Directors Lab, and I promptly burst into tears. If you’re interested in participating in the Labs, there’s something you should know upfront: everything you’ve heard about them is true; “it’s really hard to explain the experience,” “they can be terrifying,” “totally transformative,” “once-in-a-lifetime experience,” “not a lot of time to sleep,” and because of all that, “lots of crying.” It was the end of a very trying week. I was grappling with some serious imposter syndrome, fighting a terrible cold, and realizing that I was unable to locate myself in the movie (Stupid Happy) I had co-written, would co-star in, and was preparing to direct. F**k.

Jen: Luckily, I was in LA packing my bags to join Hannah as an actor in our scenes, before the Screenwriters Lab, confident in how well we knew our story; how far we’d come in the years we’d been working on Stupid Happy. At least that’s what I’d convinced myself while stuffing my worldly belongings into a bag I didn’t need from REI—we were about to embark on a month of revelrous celebration of storytelling! With our beautiful script and beautiful REI bags! I was told there would be elk! Ed Harris and elk! I’m an optimist and shouldn’t be left alone. That afternoon I got a FaceTime from Hannah, which I figured was her calling to gush about the first three days of camp (who had a crush on who, how many mosquito bites she’d suffered, etc.) I was wrong. Hannah was crying. She was crying pretty hard. She was a sitting on a rock—”the one spot with reception”—and she needed to talk about our story. I sat on my now packed suitcase and said “Okay. Shoot.”

Hannah: Realizing that you plan on completely changing your script right before directing five scenes from it is not ideal, but the advice I received from my advisors was to work with the scenes as written and use them as an opportunity to explore what I felt the story was still lacking. Luckily, I had two brilliant actors helping me with this process. Through talking about the characters, our personal experiences, and exploratory improvs, Jen, Judith Light (playing our mother), and I discovered a depth to the people we were portraying and their relationships we hadn’t yet captured in the script. It was painful to realize the distance I had put between myself and the material, but when I discovered the motivation behind that disassociation, I discovered the motivation behind my character — and there it was, the missing link, our story’s “cueball,” as Todd Graff (by way of Frank Daniel) so eloquently put it.

Jen: One of the dangers of working on a thing for as long as we have Stupid Happy is that the paint starts to dry — the closer we’d come to the script becoming a movie, the less we’d focused on the story becoming the script. In one of my favorite advisor meetings, the wonderful Dana Stevens looked me square in the eye and said “Look, there are some deep themes in the way you talk about these characters, but hardly any of those translate on the page. That’s something you need to figure out.” In 10 years of friendship, Hannah and I have developed an intimacy and ease with baring our most vulnerable selves to one another, but with one note. Dana made me realize we hadn’t done the same for our characters. This “a ha” moment is something Labs alumni will tell you to expect, but it’s a real zinger when you’re sitting in the middle of it.

Hannah: And the beauty of the Labs is that no matter how destabilizing or mania-inducing the revelation, there is always someone there to pull you up from the ground, or back down to earth. No one is there to tell you what your story is or how to tell it; they’re helping you gather information about who you are and what you have to say and helping you say it as articulately as possible. Whose story is it? It’s my story — the story of someone learning to ask for help, and to put themselves at the center of their own narrative.

Jen: And it’s my story—the story of someone learning to take initiative and negotiate the fine line between accepting the flaws and inconsistencies and demanding more of her(my)self. That these revelations about our characters paralleled some not-so-easy revelations about ourselves as writers seems inherent in the design of the Labs—it doesn’t matter how deep you dig if you’re not digging for the right thing. (The Labs didn’t challenge my use of mixed metaphor, for which I’m really grateful.)

Hannah & Jen: And it’s our story! The story of two women realizing that there is no safety in the mythology they’ve created for their shortcomings; that they’re only able to be true to each other when they’re true to themselves.