A Note to Screenwriters on Finding Their Story: “Comfort will kill you” 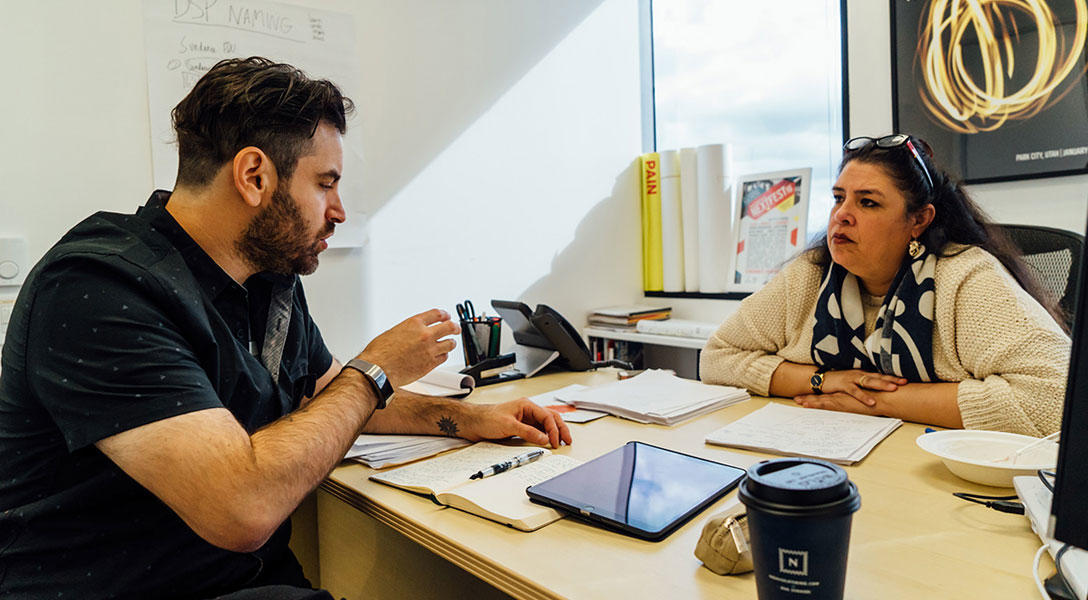 Filmmaker Meedo Taha participated in Sundance Institute’s annual Screenwriters Intensive with his project “Other People.” The Intensive provides emerging screenwriters the opportunity to hone their craft in a two-day workshop focused on the development of a fiction feature screenplay. Below he shares his insights and creative breakthroughs from that experience.

My favorite thing about growing up during a time of war was the power outages. The 24-hour newscast would cut off mid-sentence, and the grown-ups’ brows would unfurrow as each of them turned away from the screen, and my grandfather turned to us. He’d clear his throat and ask, “So, where were we?” From there, he’d launch us all into the orbit of his story, new or continued, and lift us out of the innermost, safest space of the house, past our bedtimes, into the stratosphere of our imaginations.

Many years later, I think of stratospheres as I write a story of my own. When I’m not writing fiction, I’m reading science. For decades, astronomers have been on a nail-biting hunt for a unifying fact, desperate to bridge the gap between the theory of relativity (the “out there”) and quantum mechanics (the “in here”). In writing terms, that translates to the proverbial question, “What connects me to the world?”

Five minutes into the Sundance Institute Screenwriters Intensive, Joan Tewkesbury put us in a standoff with that very question. Her “Designed Obstacles, Spontaneous Response” workshop did one thing, vigorously, incessantly, mercilessly: It cracked us wide open.

Her prompts, such as “name three times you confessed in public to something you didn’t do,” pushed each of us deep into the tucked-away recesses of who we are, in search of something we had lost, misplaced, or hidden away, made us wrench that truth out of its safety, and place it in our outstretched palms for all to behold.

By the end of the afternoon, the table between the writers buckled with raw, shimmering, vital stories that came from the primal (ink)wells inside each of us. Under Joan’s guidance, I shared a space with a dozen other humans and zero technology: no glowing Apples, no titanium, no circuitry, just the delicious scratchings of pen to paper, generating sparks of curiosity and wonder.

For Joan, a story must provoke a physical reaction inside its writer. Too often we reach outwards to find our characters. Instead, reach inside yourself and infuse your characters with what you find. Write not to fulfill an assignment; that would just keep you trapped. Write to discover your story; that will liberate you.

The arsenal of your story is you. Don’t worry about right or wrong. In writing, there’s no wrong way, just weird ways of doing things. Go on a hunt for new insights. Follow the yellow brick road. Push yourself off being comfortable. Comfort will kill you.

I got no chance to lick my wounds. Empowered by my battle-scars, I hobbled into my one-on-one meetings with advisors Ligiah Villalobos (Under the Same Moon) and Andy Wolk. They pressed on, helped me find new ways to come at my story. It’s not about audience expectation. It’s not about genre. It’s not about plot points. It’s not about “getting the film made”.

It’s just about me, my characters, and the story we’re dying to tell.

Meedo Taha is a filmmaker born into a family of video bootleggers during the Lebanese civil war. In a creative free-fall, he received a scholarship to the University of Tokyo, wrote a PhD dissertation about the love affair between cinema and architecture, earned an MFA in Directing from UCLA, taught college-level filmmaking in Dubai, got his first novel published, and is adapting it into a film. His work has received support from the Samuel Goldwyn Foundation, Directors Guild of America, and Alfred P. Sloan Foundation. He lives in Los Angeles with his wife and son, a budding photographer at three years old.