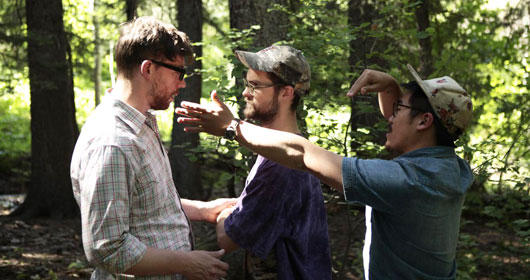 “It’s gonna be our Apocalypse Now, where we disappear into the forest for weeks and lose our minds and discover who we are as men,” say Daniels, the lone directing duo at this year’s Sundance Institute Directors Lab, where they’re joined by seven other nascent writer-directors and their projects. But Daniels (never to be preceded by “the,” they assure me), made up of longtime music video collaborators Daniel Kwan and Daniel Scheinert, have developed a symbiosis that renders them more operative together than apart.

And while yes, it’s a testament to Aristotle’s “sum of its parts” philosophy, it has also yielded dividends in the form of countless industry accolades, from their Grammy nomination for Foster the People’s “Houdini” to countless Vimeo Staff Picks. Their most recent work on DJ Snake and Lil John’s music video for “Turn Down For What” has received more than 70 million views on YouTube, and can be viewed below. But conquering one artistic terrain has done little to satiate Daniels, whose screenplay Swiss Army Man marks their first go at a feature-length film.

As they embark on their most ambitious film project to date, the pair took some time to chat about their crass brand of humor, the benefit of experimenting, and learning to say “I don’t know.”

Can you share a bit about Swiss Army Man? It seems consistent with some of the absurdist, sometimes satirical humor in your past work.

Swiss Army Man started out as a silly short film idea years ago involving a stranded guy riding a dead body’s farts off of an island like a jet ski. That was it. Then we started trying to come up with some sort of story that would give us an excuse to do that in a movie, and we accidentally wrote a really deeply personal story. Now it’s become this puzzle of a story that still fascinates us. And it’s sort of the ultimate feature-size example of the narrative and visual roller coaster movies we’ve been working on the past few years together. It’s gonna be our Apocalypse Now, where we disappear into the forest for weeks and lose our minds and discover who we are as men.

This is the first feature-length project for both of you. Having built such a working dynamic amongst yourselves on other projects, what kinds of new challenges have emerged with this screenplay?

Holy crap, every problem. We’re making a movie where one guy is dead but has a disembodied voice and the other guy is in drag half the movie and then we’re trying to mix drama, crass comedy, sincere nostalgia, and survival thriller moments all into the same scenes. So this process of testing and exploring is absolutely essential for our movie. The most important part of this process has been working with our actors Ted Tremper and Beck Bennett to discover the right process for this unconventional film–how to value their work despite all the contrived conventions we’re juggling.

Writing new material is not necessarily the focus while at the Directors Lab. Is there a temptation to rework some aspects of the script, or have you been very focused on the scenes you’re shooting?

Shhhh. Don’t tell anyone, but we’ve been writing. This is our favorite time to write. When we can use the production challenges that come up to rewrite each scene and renegotiate each creative decision on a daily basis. The Screenwriters Lab in January was a great time to absorb ideas and not write, but this June has been a nonstop work fest. Finding problems, fixing problems, finding new problems, moving onto the next scene!

What are some of the more notable creative strides that you feel you’ve made while at the lab—or maybe a special insight from a creative advisor?

Joan Darling is an acting coach/director/superhero here at the labs, and she reminded us a few weeks ago that actors love to hear a director say, “I don’t know the answer to that yet.” Her special brand of positive reinforcement has been a huge inspiration. Also, I learned how to say ‘You look beautiful this morning’ in Portuguese. I wanted to give Gabriela (our fellow from Brazil) a boost in the mornings.

How do you absorb this experience so that it’s not just a finite creative moment, but informs your work moving forward?

It’s easy. I’ve met the most inspiring, talented people of my life here. And they keep telling me they are excited to see my movie and to see what else I make. So that pressure to never suck will stay with me for the rest of my life. Joan, Joan #2, Quentin, Johnny, Geramy, Oorlagh, Sofia, Gabriela, Jeremiah, Patty, Jeff, Pam, Beck, Ted, Athina, Bobby, or Bob might be watching!