From Art to Impact: How Stories Can Create Meaningful Change 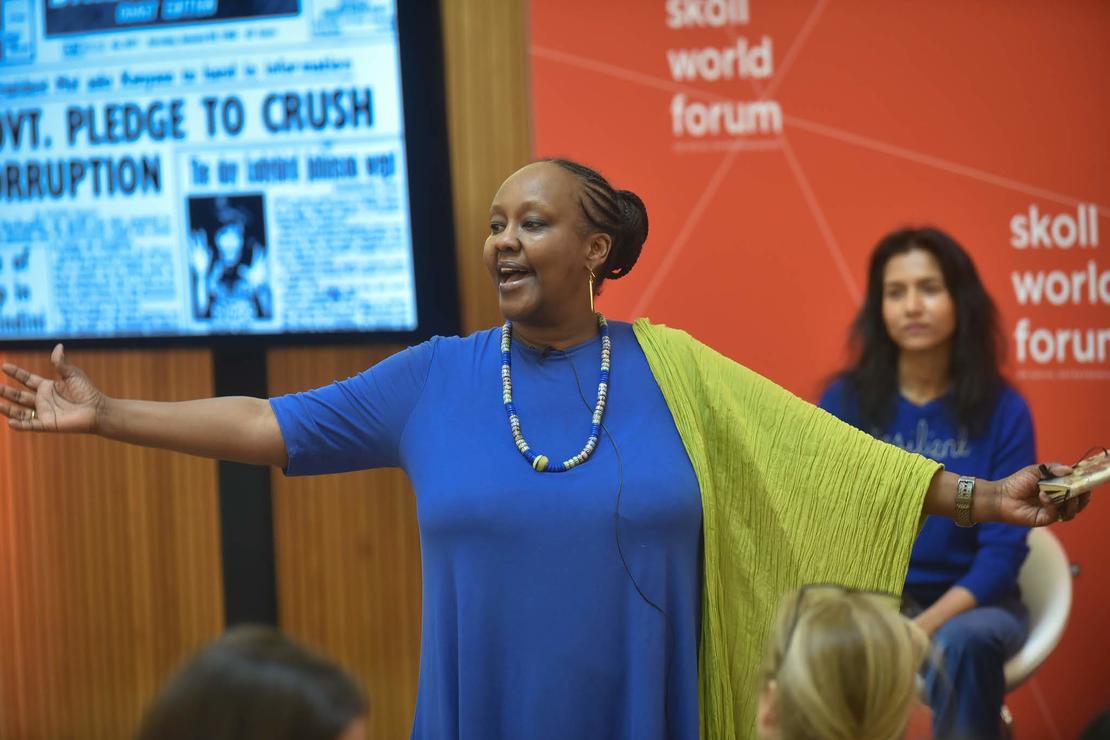 Storytellers came together at the 2019 Skoll World Forum to discuss how their work can have a tangible impact on the greater culture.

Artists hope that their work causes meaningful change in individuals and societies—but can art truly catalyze positive social change, or is it simply a reflection of the culture? This question was posed to artists and attendees at a town hall event sponsored in part by Sundance Institute at this year’s Skoll World Forum, which brings together social entrepreneurs and thought leaders to work towards solving global challenges.

The town hall was put on in partnership with For Freedoms, an organization that aims to use art to drive creative civic engagement, discourse, and direct action. The event built on the success of a similar panel at the 2019 Sundance Film Festival, and invited speakers included those working across many different mediums to accelerate change, whether through film, theatre, technology, or other means.

Filmmaker Judy Kibinge, for instance, shared the story of her native country, Kenya, where the many cultures that once thrived suddenly disappeared—and greed and corruption seemed to take the place of culture altogether, giving rise to scandals including the many recent stories involving missing funds for public dam projects. But Kibinge has found that art can help combat this negative trend.

For example, the film Thank You for the Rain documented one man’s transformation from a farmer to a leader and activist as he helped his community fight climate change. As people all over Kenya and throughout the world saw the film, they came together to create more and more climate-resilient communities and call for change—and the community that was featured in the film even garnered enough financial support to build their own dam.

“Culture is dynamic; culture changes,” Kibinge said. Just because things have been taken away doesn’t mean that we can’t fill [those] voids with new things to believe in. Making films, making art—that is what keeps our culture growing and changing and evolving into something positive.”

Culture is dynamic; culture changes. … Making films, making art—that is what keeps our culture growing and changing and evolving into something positive.

Filmmaker Shirley Abraham spoke of Black Roses and Red Dresses, a documentary following three acid attack survivors in India as they work through their trauma by writing letters to their attackers. As Abraham kept in touch with the subjects of the film after it was finished, she found that oftentimes when she called, they said they had just been rewatching the movie. She wondered why these women would want to watch themselves on screen over and over again.

“They had begun to embody the sense of shame and deprivation that society brings upon them,” Abraham explained. “So for a very long time they had hidden themselves inside their houses [and] they would hide their faces if they were to travel. And I think because the film tried to transcend their physical situations and start looking at an emotional landscape—and start looking at them as people with a fully formed sense of personhood—it brought them to the point of feeling that a certain sense of visual justice had been done. … The choices [we make as artists] determine what will be remembered and how it will be seen. [It’s about] finding justice of representation.”

The choices [we make as artists] determine what will be remembered and how it will be seen. [It’s about] finding justice of representation.

Another prominent testament to the power of representation was Alfonso Cuarón’s recent Oscar winner Roma. Not only did the film shine a spotlight on indigenous Mexican people and their stories in the greater cultural conversation, but it also helped push legislation for domestic workers’ rights in both Mexico and the United States—bringing respect and dignity to an often-overlooked part of the population.

But the stories don’t have to be widely known to make a difference. Indhu Rubasingham is the artistic director of the Kiln Theatre, which is located in a majorly diverse immigrant community in London. She recounted her experience with a youth theatre workshop, after which a timid young man thanked her and said, “‘I came to this country [and] I was nobody; I stand on this stage [and] I am somebody.’ That’s the transformative empowerment that accelerates change. … Theatre creates that community, that collective sense of identity, that ability to belong.”

Moderator Tanya Selvaratnam from For Freedoms called for artists to respond to the “urgent need to rehumanize the world [by linking] art and culture with social entrepreneurship. Art [can] pivot consciousness, art provides levity and comfort, art sparks emotions and ideas, and art can catalyze change.”

Selvaratnam admitted that once, “in a dark moment, I said to a friend that the bad guys ultimately win. … And she responded, brilliantly, ‘But the storytellers also win.’”

In a dark moment, I said to a friend that the bad guys ultimately win. … And she responded, brilliantly, ‘But the storytellers also win.’

In addition to participating in the town hall event, Sundance Institute also sent four Stories of Change fellows to attend the Skoll World Forum. These filmmakers, who focus on creating work that has a social impact, got the chance to meet with like-minded creators and learn how to harness the power of storytelling. Here they share their takeaways on how stories can be inspired by global changemakers.

Our films are helping to create new representations, new ways of imagining our lives and shaping our future.

Together we make sense of our worlds through our stories—excavating the dots that connect to create an imagined better world.