From Apocalyptic Philadelphia to a Writers’ Room for Trans Women and Femmes: Meet Our Newest Knight Alumni Grantees 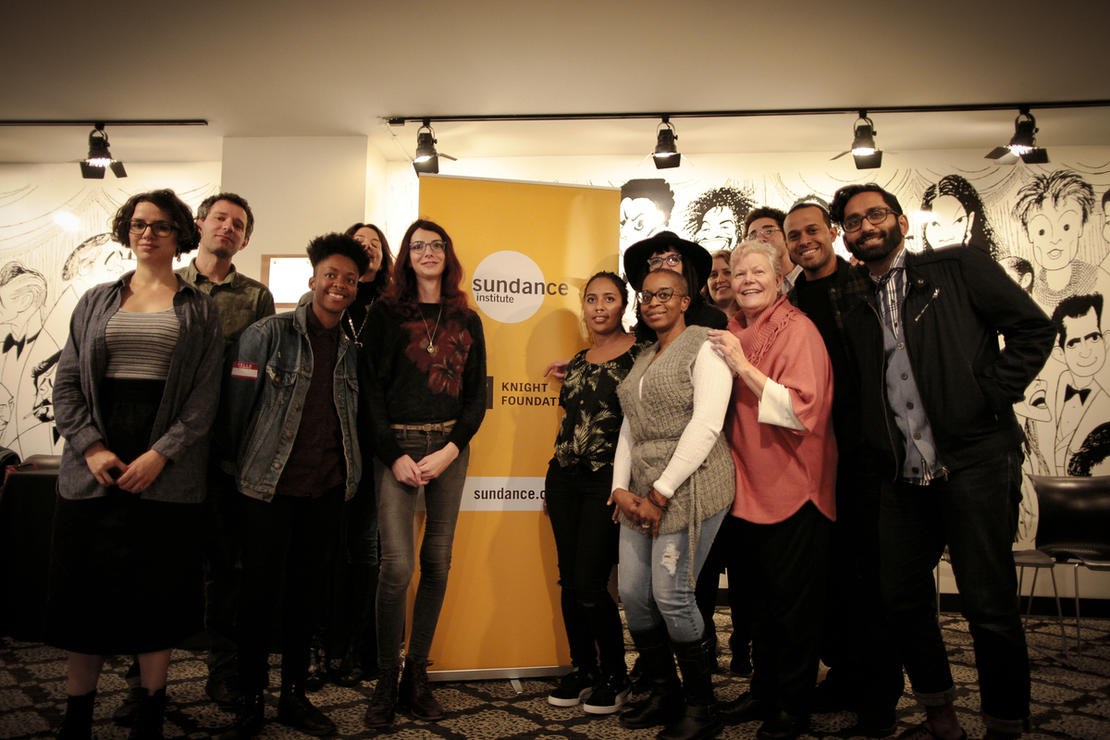 Our 2019 Knight Alumni grantees are not easy to fit into a box—this year’s awardees include a Detroit-based harpist, a multidisciplinary artist with a PhD in mythological studies, and a filmmaker who sponsors Indigenous delegations to come speak at the United Nations forum in New York. We knew their projects would span genres and topics, and that they would use their grants in innovative ways—and we weren’t disappointed.

Knight Alumni Grants, a new avenue of support from our partnership with the John S. and James L. Knight Foundation, are awarded to selected participants of any of our Knight-supported artist-development programs. The programs take place in eight communities—Akron, Ohio; Charlotte, North Carolina; Detroit; Macon, Georgia; Miami; Philadelphia; San Jose, California; and St. Paul, Minnesota—and Sundance Institute selects artists from those programs to receive up to $5,000 to support their projects.

We chatted with a few of the 2019 grant awardees about their experiences—this is what they had to say.

Ahya Simone is a Detroit-based harpist, singer-songwriter, and filmmaking femme queen who uses film and sound to explore ideas around identity, vulnerability, language, and existence as a black trans woman in America. She is the creator, co-writer, and director of the webseries Femme Queen Chronicles and has been recognized as a 2018 Sundance Institute | Knight fellow, a 2017 Detroit Narrative Agency 2.0 fellow, and a 2018 Kresge Artist fellow.

“With the Knight Alumni Grant, I brought together a group of black trans women and femmes from across the country to spend three days in a writers’ retreat further developing the vision of the upcoming webseries Femme Queen Chronicles, a story of four black trans women in Detroit, following the success of our original pilot.

“The writers’ retreat was a huge success! One of the biggest strengths was not just the fact that we were able to bring together some of the most creative artists, writers, and organizers in the country, but also how varied and unique each perspective was in the collective writing process, even despite mutually shared experiences.

“With this being our first-ever attempt at a true writers’ room, there were struggles for sure—along with a lot of laughs—but once we surrendered to the inherit roadblocks of the process and went with the flow, we made huge strides as a collective to decide how to best bring the entirety of the FQC story to life. We definitely had super-ambitious goals—aiming to have six detailed scripts by the end of three days, sheesh!—but we still walked away with six robust episode outlines in addition to a deeper, more cohesive understanding of the characters of FQC and their arcs, the world we’re aiming to build and showcase with these narratives, and insight into how we can continue to make a show that first and foremost centers black trans women as its main audience.

“We are so thankful that we were able to host this retreat with the support of Sundance Institute and the Knight Foundation! Our next steps are to take all we’ve gathered from our retreat and transform it from a framework into a functional series of scripts.”

Born in Asuncion, Paraguay, Bettina Escauriza is a filmmaker, musician, artist, and writer based in Philadelphia. Her work deals with Indigenous knowledge (specifically Guarani epistemologies), colonization, anarchism, urbanism, and exile. Alongside her work as an artist, Bettina also does human rights work at the United Nations, focusing specifically on the role of Indigenous Peoples and Indigenous knowledge in mitigating the current climate crisis. Bettina is a Sundance Knight Fellow, a Flaherty Film Seminar Fellow, an October Colony Screenwriters Colony Fellow, a Research and Curatorial Fellow at Slought (UPenn), and an IEar Fellow (RPI).

“The grants that I received from the Knight Foundation made it possible for me to make two short films alongside community members in the Paiute Reservation in Nevada. I’ve built my filmmaking practice on an ethos of reciprocity, and to that end, I used part of my grant money to run a filmmaking workshop on the Paiute Reservation, where we made a brilliant short comedy film with a group of youth.

“We shot the short on Paiute lands at the foothills of Nu-Wav-Kai (Snow Mountain) with the help and blessing of the community. Through the generous funds provided by the Knight Foundation, I was able to bring in talented actors and crew from Los Angeles to make a great film and also model what a proper shoot looks like for the youth who participated. It was an incredible experience that continues to create more opportunities for me and for all the people who joined me on this wild adventure. I am grateful for the support of the Knight Foundation and Sundance Institute, and I am excited about all of the wonderful relationships I have built through this process. I am thrilled by all the good work that is to come.”

Iris Devins is a writer, director, and producer. Her narrative short, After the Date, premiered at the 2017 San Francisco International LGBTQ+ Film Festival and screened at many other festivals. She was a 2017 Sundance Institute | Knight fellow, was awarded a 2018 Transformation Award by the Leeway Foundation, and received an Art and Change Grant for her upcoming short, Trashy Booty. She is currently developing her first narrative feature, Angie Star.

“Professional audio is really important to me, so with my Knight Alumni Grant I did a professional audio mix and sound design at a studio in NYC called Dungeon Beach, as well as an original score with a composer, Anthony Vargas, and a trained vocalist, Anna Young. All of this was for my short, Trashy Booty. It’s a dark comedy about two dumpster-diving trans women who find a hitchhiking robot in the outskirts of Philadelphia.

“While I have a good bit of post-production skills to do many tasks on my own, audio mixing is one of my weaker skills—that’s why a real professional audio mix helps me out a lot. I loved the quality of the mix, and I’m so happy with the experience and what it did for my short!”

Julien Turner’s 2015 short, Tahirih, won Best Narrative at the Tri-Co Film Festival, and his latest fiction short, MAY, recently premiered at the 2019 SXSW Film Festival. A native of Tennessee, Julian draws inspiration from the region’s complex cultural imagination, and is interested in crafting narratives centering on themes of youth, home, and nostalgia. He’s a graduate of Swarthmore College with concentrations in history, black studies, and film and media studies.

“Usually when I’m making and funding my own projects, I—and, I imagine, other young filmmakers—get tunnel vision. I start simply focusing on how to get through the shoot, and Ineglect the necessary finishing expenses that create the final product.

“The Knight Alumni Grant eased the entire post-production process for my short Viewing Room and helped us quickly reach a more polished version, allowing my team to record voiceover, mix sound at a professional studio, and take care of distribution (which for us meant submitting to festivals with the goal of sharing my film across the country).”

Li Sumpter is a mythologist, educator, and multidisciplinary artist who employs strategies of world building and DIY survival to cultivate community action and awareness around local and global issues. She is the founder/director at MythMedia Studios—a creative research lab and collaborative design initiative focused on building better worlds of the future. In 2016 and 2017, Li was awarded an Art and Change Grant from the Leeway Foundation for her interactive graphic novel Graffiti in the Grass.

“The Knight Alumni Grant was a catalyst for getting pre-production underway for my project, Graffiti in the Grass: Cozy Catastrophe, which promotes creative resistance and community readiness through an apocalyptic adventure set in future Philadelphia. Things had been stalled in the concept phase for months due to a lag in resources—but with the funds awarded I was able to bring the Cozy Catastrophe vision to reality in a major way for me, my creative collaborators, and community partners.

“With the grant, I was able to hold outreach meetings and interviews with potential collaborating artists and game designers, cultivate community partners both local and national, develop project tools and design assets, and research and resource potential technologies and applications for different gaming installations (or “game pods”). Grant funds also made it possible for me to attend the BlackStar Film Festival in Philadelphia and the Imagination & Technology Conference at Pacifica Graduate Institute in Santa Barbara, where I was able to connect with active communities of artists, designers, and producers engaged in immersive narrative projects.”

This program is made possible by generous support from the John S. and James L. Knight Foundation.