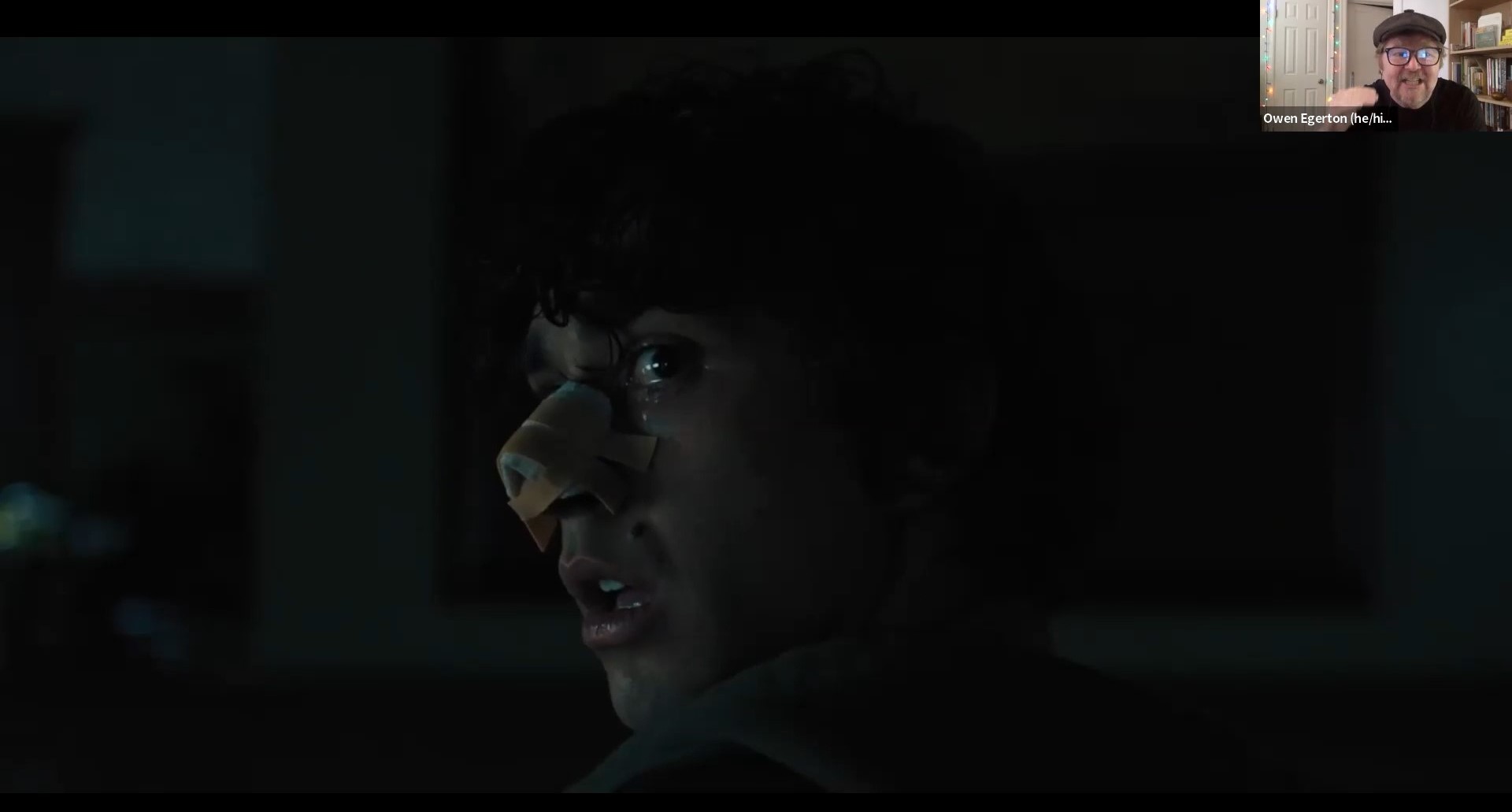 Award-winning filmmaker and novelist Owen Egerton carries a notebook around with him quite often. As a horror screenwriter, he believes that it’s his job to hunt down what terrifies him.

“I write stuff down all the time. What we do as writers in the horror genre is the opposite of what other people do. It’s the opposite of what we’re told to do. If something scares a child, you’re going to tell them to just put it out of their heads and not think about it. Instead, we’re like, ‘put it down on paper, write it out, expand on it,’” says Egerton during Sundance Collab’s recent Master Class: Creating the Nightmare in Your Horror Screenplay.

Throughout the three-hour interactive online class, Egerton explores the history of horror and discusses the various types of horror storytelling. He also talks about using horror to address social issues and how to elevate the genre through character. In between sessions, students had the opportunity to ask questions about the craft of writing horror and how to bring a fresh take to a tried-and-true genre.

“We move towards storms so that we might be struck by lightning. We don’t wait for inspiration to find us, we tackle it. And when we have a scary thought, when we have a nightmare — even if we don’t know why it scares us — we write it down.”

Having written and directed several horror films including Mercy Black (2019) and Blood Fest (2018), Egerton explains how each writer has a “bouncer” in their brain — and that bouncer is in charge of all the ideas that want to come in. But it’s the horror writer’s job to “give the bouncer a night off.”

“The bouncer is sort of slowing ideas down. ‘Nope, that’s a bad idea. People are going to judge you if you say that. They’re going to laugh at you.’ But our job is to pick up that notebook and let in all the ideas — the bad ideas, the ideas we would never show anybody, the ones that frighten us, the ones that feel kind of dangerous, the ones that are offensive — even to us. Write down all these ideas. Don’t let the bouncer turn them away.”

It’s one thing to have the ideas, but where do you go once you’ve let them all in?  Using a simple four-point system, Egerton shows how he finds his way into a narrative from a single idea. He does it in one of four ways: character, monster, world, and idea. And writers can start with whichever one.

“My story is going to have all of these [character, monster, world, idea], but which one do I start with? What is the grain of sand around which the pearl gathers?”

Using the main character in Mike Flanagan’s Hush to elaborate, Egerton notes how the protagonist (Maddie) is independent, lives alone, and is hearing impaired.

“That’s his character. And [Flanagan] might be thinking, ‘I know I want a story about this person. Now, how can I put her in a situation that tests her weaknesses and her strengths? I’m going to put her in a home invasion. She’s alone in the woods and this guy is trying to get in. That’s when I’m going to build my monster, my world, and my ideas around my character.”

Using Jaws as an example, Egerton notes, “What do you start with? A man-eating shark. I know I want a shark that’s going to be terrorizing, but now I need to think about where this should take place. How about an island? Great. And I want a lot of people… how about an island during the summer where there are a lot of tourists? We’re now building our world. All of these [character, world, idea] can start with a monster and we build up from there.”

Screenwriters are often inspired by locations when developing their horror screenplay. “The Shining is a great example,” explains Egerton. “The film didn’t start with Stephen King thinking of the relationship between fathers and their children, or even alcoholism and the way it can rip a family apart.”

“For Stephen King, it started with one night when he stayed at The Stanley Hotel in Colorado. While he was there, he had a nightmare about his young child getting chased through the hallways by a firehose that looked like a snake.”

Egerton told students how King woke up in the middle of the night terrified, so he lit a cigarette. “And by the time he was done smoking that cigarette, he had the whole story of The Shining. It was based on a place.”

The 2006 Sundance Film Festival premiere The Descent is another illustration of how an artist can begin their narrative with a place. “The early idea of The Descent was not cannibalism. It was not a four-woman collection of cave divers. It was… caves. Caves are scary. Now, how do we do our best to explore that? And that’s what they did when they made the plot. They started with the world.”

Many times beginning with a location could mean a place, but it could also be a culture. For this, Egerton refers to the film Midsommar. “They live in a place where there’s almost always sunlight, they have their own rituals, their own rules, and that becomes what we start with. We have that culture, and now we’re going to find what characters we want to bring in. Then we need to discover what the monster is. But we start with the culture.”

Egerton’s final point touched on entering a narrative with an idea. For instance, the 2017 Sundance Film Festival thriller Get Out initially started with an idea  — Jordan Peele talking about the awkwardness that comes with meeting your new significant other’s family and friends for the first time.

“He [Peele] thought, ‘I want to write about that awkwardness.’ That’s where he started and I love where he got,” Egerton says of Peele’s award-winning project.

Sometimes though, an idea can also be a rule. Egerton shared how Wes Craven once read a story in a Los Angeles newspaper about a family whose children couldn’t sleep due to nightmares. One child said he was even afraid that he would die if he fell asleep. The child ended up actually passing away in his sleep that night.

“Craven read that story and came up with a rule: if you go to sleep, you die. From that rule, he invented Freddy. From Freddy, he invented Elm Street, and that’s where we got the franchise [A Nightmare on Elm Street]. But it started with the rule.”

Some people might argue that because of the state our world is in right now, we need less horror and more comedies and musicals right now. So, “why horror? and why now?” asks Egerton.

“It turns out that it’s during horrific times that we often gravitate towards horror stories. It tends to be what we end up using to work out our fears, to work out our anxieties, and to work out the new moral questions that seem to be ripping us apart.”     “Our job [as horror writers] is to study and feel the horrors of our own life and the horrors and scares of our neighbors and our society, and find a way to filter that into stories, into scripts, and into images. It ends up being a place where we can play with what terrifies us.”

Sign up for Sundance Collab to watch a recording of the full Master Class: Building the Nightmare in Your Horror Screenplay and join the online course: Screenwriting: Crafting Your Horror Feature.