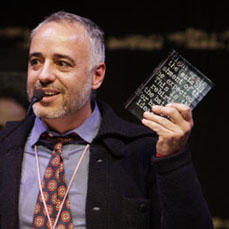 All film festivals are hubs of industry hustle, but it’s crucial to not let the biz compromise the spirit of your experience when you are an excited filmmaker gearing up to bring your first film to the Sundance Film Festival. At the 2010 Festival, Javier Fuentes-Leon’s Contracorriente (Undertow) took home the World Cinema Dramatic Audience Award and subsequently exploded on the global festival scene. A seasoned Festivalgoer, Fuentes-Leon discusses tips for 2011 Festival filmmakers, the general camaraderie and magic in Park City, and the international journey of his film since last year.

What did you do to prepare for last year’s Festival and do you have any tips for this year’s filmmakers?

Sundance is great, but it’s an intense festival. I know it sounds corny, but try to enjoy it. If you are going there with hopes of selling your movie or getting a lot of press, don’t forget that having a film in the Festival is a big accomplishment and try to enjoy your time there.

A big group of us from the film were there last year and it was great to have some time to enjoy it together and meet other filmmakers. I loved to hang out at the Filmmaker Lounge and not be worried about “Am I getting into the right party?” and “Am I part of the VIP?”

I really enjoyed the events that were organized by the Festival. Going to the Filmmaker Lounge or going to the lunches and dinners with the other filmmakers was great because that is where you met everyone involved in the Festival.

If you have a badge that says “filmmaker,” people will strike up conversations with you, want to know what film is yours. Always have your badge and wear it prominently outside of all the layers of clothes.

You’ve attended the Festival as both a fan and a filmmaker. Talk about your different experiences.

I went to the Festival the first two times just for the hell of it and then a third time because I edited a short film that was selected. Last year was the first time I went with a film of mine. I have always enjoyed the Festival but the expectations when you are going just to go are much lower.

How did the international community contribute to your Festival experience?

Living in the United States and speaking English enabled me to meet all kinds of people and I had many friends there with me. I didn’t feel like things were structured so that international filmmakers were in one place and U.S. filmmakers in another.

There is an event just for international filmmakers but there are also a lot of events for all the filmmakers. The Filmmaker Lounge is for everyone, and walking on the street you meet everyone, so I don’t think there was a feeling of separation.

What has happened with Undertow since it screened at the 2010 Festival?

Undertow premiered in San Sebastian in Spain, but it was really after the Sundance Film Festival and winning the Audience Award that it really exploded. Since then, it played 120 festivals and won 40 awards—half of those audience awards. It has been amazing. It played Colombia, Peru, Bolivia, UK, Spain, and the Netherlands.

It has played LA and New York, and it opens in Miami this month with Manolo Cardona appearing at opening night. It has received distribution in a lot of places. It was selected by Peru to be their official entry to the Oscar for Best Foreign Language film, and it is an official entry for a Goya, which is the “Oscars” of Spain. Sundance was an amazing launching pad for the international awareness of the film.

Undertow chronicles a furtive relationship between two male lovers. This remains a touchy theme in many Latin American countries. How has the film been received there?

It was received well. We’ve had a lot of press attention. People went to see the film. It is still a touchy issue and many are not going to go see it no matter what people tell them about it or how many awards we get. Maybe if we get the Oscar, more people will see it. In Peru, Bolivia, and Colombia, it was not a smash hit; it still creates an obstacle for a lot of people. There hasn’t been any negative press or protests or anything. I’m happy with the response it has received.

What is your most memorable Sundance Film Festival experience?

We had a couple of standing ovations at the Festival and that is something you don’t forget. The film is in Spanish and we didn’t have a clue how it would connect with American audiences and we were so happy to see that they loved it.

And of course getting the World Cinema Audience Award was amazing. It was absolutely unexpected. I knew the audience appreciated the film but there were many other great films in competition and it was a great moment to hear our name read during the award ceremony. Absolutely unforgettable.