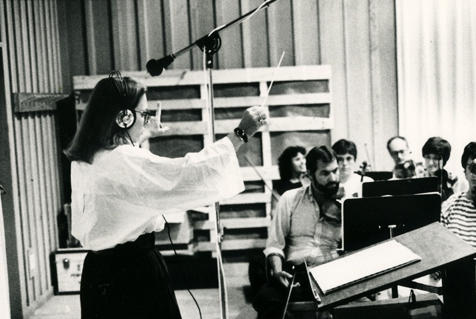 With support from the GRAMMY Museum, Sundance Institute has digitized more than 700 audio and video recordings, pages of sheet music, photographs, and other documents from the early days of its Film Music Program—including seminal work in independent film composition from as early as the 1980s.

A few highlights of the catalogued items include a 1987 recording of a conversation with Brave Little Toaster composer David Newman and director Jerry Rees, and 1988 video of a panel on the philosophy and methods of composing for low-budget films, among many other gems. The project also uncovered correspondence with Robert Redford regarding the founding of the Film Music Program, as well as early newsletters and reports that give insight into the successes and challenges of the program’s beginnings.

Founded in 1985, the program has supported 177 artists through its labs, which connect promising film composers with emerging directors to provide first-hand experience with the collaborative process and nurture the development of music in film.

When it began, there were very few other formal programs that provided resources to artists in the field. But many of the Institute’s early-supported artists went on to have hugely successful careers in the industry, such as Laura Karpman (Taken), Erik Lundborg (The Curious Case of Benjamin Button), and Curtis Roush (The Hunger Games), among many others. After a hiatus, the lab returned in 1998 and has since evolved to incorporate sound design in addition to composing, in both narrative and documentary film.

From the archives: A 1988 news story about the Composers Lab in Sundance, Utah.

The assets preserved through the GRAMMY Museum Grant document the Film Music Program’s beginnings through 2007 (after which most assets began to be created in digital formats). The audiovisual materials were digitized from analog formats such as 1 inch Type C, U-matic, VHS, and cassette tapes—all of which would eventually become inaccessible if they remained in those formats.

While it’s uncertain how these materials were stored initially, even in good conditions such items deteriorate over time. Damage from humidity, regular wear and tear from playback, and format-specific issues—like magnetic tape becoming sticky or beginning to shed, for example—are among the common reasons these materials become unplayable. And even if they could be preserved in their original formats, the devices needed to play them are becoming more and more difficult to find.

Tanya De Angelis, the associate director of the Sundance Institute Archives & Collection, said, “We’re fortunate that early staff had the foresight to save records documenting the creation of the Composers Lab.” This history “provides context and a deeper understanding of why the program is core to the Institute’s work.”

The 2017 digitization effort was one of 14 projects supported by the GRAMMY Museum Grant this past May. The grant, which supports the preservation of American musical heritage as well as research exploring the impact of music on the human condition, has awarded more than $7 million to date. With the funds, the Institute was able to work with professionals at the University of Utah Digital Library Services on photos and printed documents, DC Video (Burbank, California) for video assets, and Penguin Recording (Burbank) for audio recordings.

With the Institute’s longstanding commitment to film music and composers, the Archives team hopes that this never-before-seen material will illuminate the creative process and evolution of the field, bring attention to the value of music in film, and deepen appreciation for the work of these artists. De Angelis said, “As stewards of these records and stories, we want to not only celebrate and share the Institute history, but inspire future artists to explore and discover the value of music in film.”

To learn more about the work of the Sundance Institute Archives and Collection, go to sundance.org/archives.