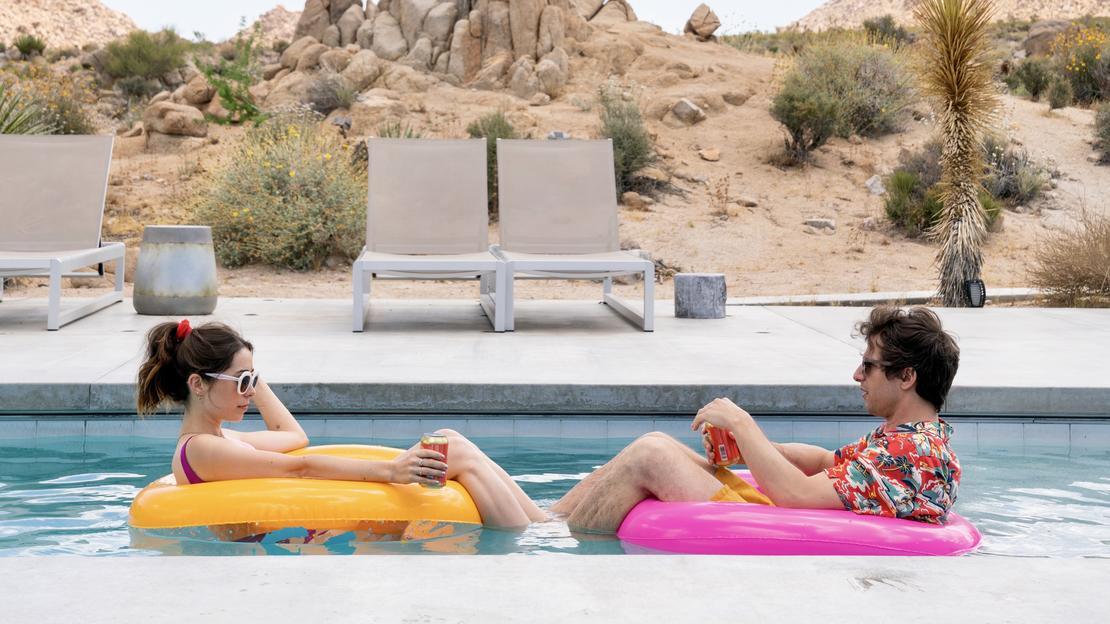 When Palm Springs premiered at the 2020 Sundance Film Festival in January, it felt like the temperature rose (at least a few degrees, anyway) in snowy Park City. Max Barbakow’s buoyant comedy starring Andy Samberg and Cristin Milioti begins streaming on Hulu (and playing select drive-ins) today, offering something of a virtual vacation into another dimension of time and space. Below, see what Barbakow and his actors had to say at the film’s world premiere.

Palm Springs “was such an absolute pleasure to discover,” said senior programmer Heidi Zwicker at the premiere of director Max Barbakow’s feature debut in the Festival’s U.S. Dramatic Competition. “[It] impressed us as much with how clever and funny it is but also with how playfully it depicts love, loneliness, and existential dread. We were utterly charmed.”

The lovable-as-ever Andy Samberg plays the laidback-to-the-extreme Nyles, who’s in a lackluster relationship with vapid girlfriend Misty and gets dragged to a wedding in which she’s a bridesmaid. There he meets Sarah (Cristin Milioti), the bride’s sister and the problem child of the family, who’s equally annoyed at having attend the celebration of love. When Nyles impresses Sarah with his suspiciously smooth and choreographed advances, she begins to give in to his charm—but the two are interrupted by a sudden extraordinary event that causes them to get stuck in Palm Springs for much longer than they anticipated.

Eventually they realize the futility of fighting the surreal situation they now find themselves in, and they embrace the meaningless of life—creating their own absurd adventures including a dance scene that Milioti confirmed “was so much fun, and it’s the type of stuff you grew up watching [and wanting to do], which is what I felt, and then I got to do it.”

Explaining where the idea for the premise came from, Barbakow said, “With this character who was so afraid of commitment and connection an intimacy, what would be the worst possible scenario for that guy? Being stuck at a wedding”—and with somebody who may force him to come to terms with his fears.

Samberg and Milioti serve up so many natural comedic flourishes that an audience member asked how much was their own improvisation verses staying true to the script. Barbakow sang the praises of his two lead actors, who knew their characters better than anyone and were quick with making the script their own. Samberg joked, “And it was an indie, so the last take was the second take. Se we kind of tried to work out our ‘improvs’ before we started rolling.”

When asked whether the team consulted with real scientists to explain their escape from their supernatural circumstances, Samberg said, “We have five pages of a scene that we worked out that really explained all of [it], and we even shot some of it (sorry, Cristin). And then we got into editing and we were like, ‘Oh, people don’t wanna hear about it. They wanna see if the two people are gonna smooch at the end—and they know they’re going to—so they just want to get to that.”

Ed. Note: The title of this article is taken from a quote by Sundance Film Festival senior programmer Heidi Zwicker at the Palm Springs premiere. This story was originally published in January 2020.