‘Official Secrets’ Is a Political Thriller That Asks “What Would You Do? 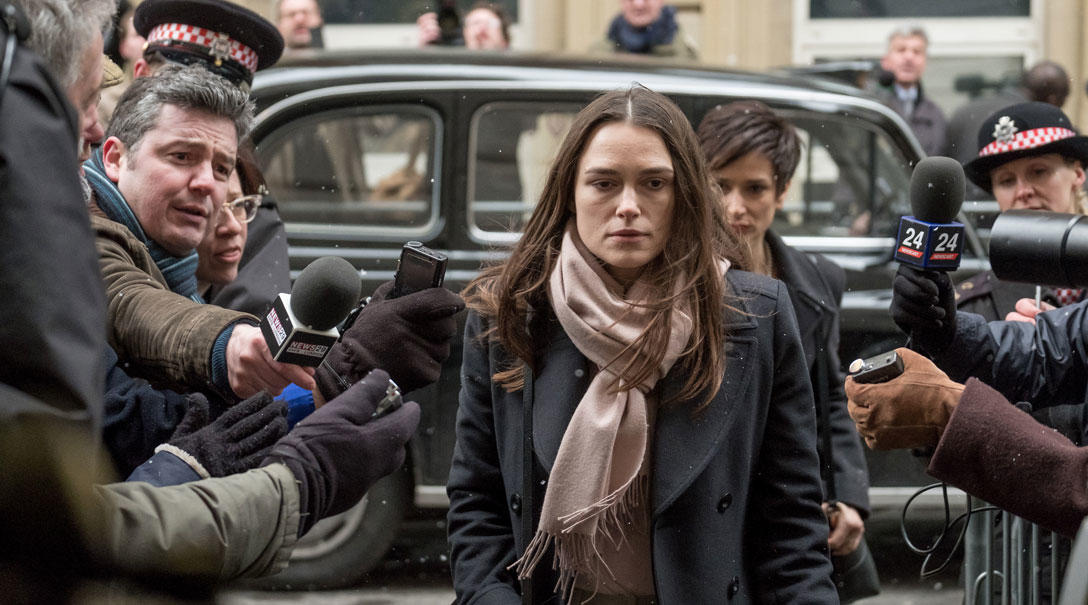 “This year we’ve seen a lot of stories about individuals challenging the system to do what they believe is right,” said Director of Programming Kim Yutani at the premiere of Official Secrets. “This is one of these stories, and it is an extremely powerful one.”

Adapted from the book The Spy Who Tried to Stop a War, South African director Gavin Hood’s political thriller tells the true story of Katharine Gun, a former translator for the British intelligence agency Government Communications Headquarters. In 2003, Gun leaked a top-secret memo that exposed an illegal spying operation by the United States and United Kingdom, the goal of which was to blackmail smaller, undecided member states of the United Nations Security Council into voting to go to war in Iraq.

Keira Knightley portrays the courageous woman who took a stand for her convictions, though she may not have fully realized at the time just how much she was risking. Not only does she face the possibility of being charged with breaking the Official Secrets Act, but the government also retaliates against her family, calling into question the visa status of her husband, who is from Turkey.

Taking us through the riveting unfolding of events, the brilliant cast is rounded out by Matt Smith as Martin Bright, the journalist who took the risk of publishing the leak (Bright himself also makes a cameo in the film), along with Ralph Fiennes as the lawyer who leads Katharine through the long, dragged-out process of litigation as the government attempts to make an example out of her case.

Hood hopes that, despite whether audiences think Gun was in the right or not, they will be inspired to speak up when they see something amiss in their own spheres of influence.

“There are many of you in the audience who I’m sure think [Katharine] was naive (and I think to some extent she was)—or perhaps she did the wrong thing … and I don’t want to suggest that you have to think that she did the right thing. … But this issue of when you blow the whistle, when you speak up, is what fascinated me about this story. [Most of us] work for someone, and sometimes we see something that comes across our desk that says there’s something a little rotten in our organization. … When do you speak up and say this isn’t right? Most of us don’t speak up. I don’t know if I have the courage to do what she did. We don’t speak out for fear of losing our jobs. This young lady, however naive you think she was at the time, spoke up at the risk of losing not only her job but her freedom. So whether you agree with what she did or don’t, I don’t think you can say she wasn’t brave.”

Writer/director Jason Orley introduced the premiere of Big Time Adolescence with a story from a particularly long day on set about a week and a half into shooting. “Our lead actor, Pete [Davidson], came up to me and he was really excited and he goes, ‘Yo, Jay, I think this movie is going to be really good.’ And it was like it had just occurred to him in that moment. … He goes, ‘Yeah, look around at the crew: everybody’s miserable. They’re stressed out, they’re panicked—it’s fantastic. I’ve done big-budget movie sets—everyone is comfortable, they’re well fed, they’re happy—and the movies are terrible. But this one … ’ And I was like, ‘Well, you know, I wouldn’t say everybody’s miserable.’ He’s like, ‘No, no, they’re miserable. We had to push lunch twice; they’re hungry. Everybody hates you. This movie is gonna be sick.”

Davidson’s prediction seemed to prove true at the premiere screening, where audiences fell in love with Orley’s debut feature about teenager Mo, who comes of age under the destructive guidance of Zeke, his older best friend and charismatic college dropout.

Davidson plays a Zeke that’s so convincing, audiences might wonder if he’s just playing himself on screen. And true to form, he stole the show during the post-screening Q&A as he openly ridiculed audience members’ questions and turned each answer into a joke. Orley warned, “This is gonna be a Pete stand-up show in about five seconds.”

When asked about the origins of the script, Orley explained that he wrote it five or six years ago and has always had this story in the back of his mind. “On the first day [of film school] they said, ‘You’re here because you have at least one story that you know you really need to tell.’ And I was pretty sure it was this one. … I grew up with older brothers and older friends and I’ve always been drawn to this kind of character. … Taking one kid and showing his whole arc from idolizing someone to being their best friend to outgrowing them was something that really excited me.”

It was really important to Orley that in this coming-of-age story, everything “doesn’t really work out” completely positively for the two characters in the end, because “[Mo] realizes that this isn’t the path he wants to be on … throughout the friendship, he learns, we learn—kids will learn.”

When we first meet Austyn Tester in Jawline, the debut feature by Liza Mandelup presented in the U.S. Documentary Competition, he’s asking a friend to take his picture around their small Tennessee town. The snaps are for his social media profile, which has become Austyn’s preoccupation and potential ticket to fame. Living at home with his mother, brother, and their 11 cats, 16-year-old Austyn is developing an online persona, presenting himself as a font of affable positivity and becoming a heartthrob to thousands of followers—mostly young girls—throughout the country. Before long, he’s got an agent and is invited on his first tour through the American South, participating in meet-and-greets with other online personalities, where they perform on stage for crowds of adoring fans and pose for endless selfies.

While Austyn remains central to her exploration of today’s online, live-stream teenage culture, Mandelup also contrasts his small-town strivings with a bigger business operation in Los Angeles, where Michael Weist runs a management company for rising celebrities in the live-streaming world, harvesting likes and cultivating fan bases that number in the hundreds of thousands and beyond. With bigger budgets and constant maintenance, these online personalities are operating on a different level than Austyn, even if the content doesn’t seem substantively different, and even if these boys’ level of sophistication and maturity is pretty much the same.

During the post-screening Q&A, Mandelup talked about the origins of the project, which took four years to complete, flanked by Tester, Weist, fellow internet stars Julian and Jovani Jara, and Tester’s supportive older brother. “I had the idea to make a film about teenagers and love on the backdrop of technology. I started researching and found these meet-and-greets that you see in the film. I was kind of confused at first. What’s a meet-and-greet, and who are the people you’re meeting?” she said. “I went to a bunch of these with the DP, Noah, just filming and meeting people. Then when we met Austyn, we were like, ‘Okay, we’ve got a feature here.’”

Tester said, “I first met Liza in Houston, Texas, when I got to go on a tour. She was filming, doing her thing. She was like, ‘Who are you?’ And I told her who I am, where I’m from, and why I’m here. She just seemed very interested.”

“And you told me you loved documentaries,” Mandelup said.

“Oh, I love documentaries,” he said. “I never knew we would be standing here talking about this amazing film.” Since filming ended, Austyn has continued to make videos online, but he said he’s also interested in pursuing acting, even if he lives four hours from the nearest big city, Atlanta. Meanwhile, he’s working as a Starbucks barista, a revelation that elicited applause from the audience. After watching teenagers living in an online world, harvesting exclusively online dreams, they may have been relieved to hear he was doing something so relatable, and terrestrial, by comparison.

Bedlam, a deeply personal film from Kenneth Paul Rosenberg, is the first major documentary to chronicle the state of health care for severely mentally ill people in the U.S., particularly in Los Angeles, and how public policy has failed them. It’s also a powerful call to action to create health care reform.

Combining a look at the history of care for mental illness (the film takes its title from the name of the first mental asylum in England), Rosenberg’s camera follows three individual cases in Los Angeles: Johanna, a bipolar woman in her 20s who is often in a deeply manic state; Todd, a 50-ish man caught in an endless struggle for public housing; and Monte, diagnosed with schizoaffective disorder and whose frequent and lengthy incarcerations led his sister Patrisse Cullors to co-found Black Lives Matter.

Rosenberg also reveals his own connection to the issue. His older sister was diagnosed as schizophrenic as a young woman, but whose parents consistently covered up her illness and refused to believe her diagnosis. Interacting with his sister’s disorder inspired him from an early age to become a psychiatrist, which he did before becoming a documentarian.

While introducing the film, programmer Harry Vaughn shared that the doc had deeply affected him and other programmers when they first viewed it. “I thought it was very personal to me and my family’s story,” Vaughn said. “Then when we opened it up in the programming room, almost all of the other programmers had a similar story. To see it have the effect it has was very moving.”

During the Q&A that followed the premiere, Rosenberg noted that this was a common response. He added that when filming interviews there was almost always a sound person or camera person who would approach him and convey, usually in whispered tones, that this was also their story. He suggested that this is the way to bring about change in policy. “Treatment for mental health hasn’t progressed in the way it has for breast cancer or HIV,” he said. “We have medications for psychosis which are literally 70 years old. The cost burden is greater than all non-communicable diseases combined. That’s so unacceptable.”

Several of the doctors and caregivers featured in the film also took the stage. All urged the importance of advocacy in making the necessary change to public policy. Cullors and Mark Anthony Johnson, Monte’s caretaker, joined Rosenberg onstage and asked for a call to action.

“The first thing we can all do is go back home and investigate what in your city is getting money and what isn’t,” Cullers said. “We invest billions of dollars in Los Angeles county to criminalizing people with mental illness.”