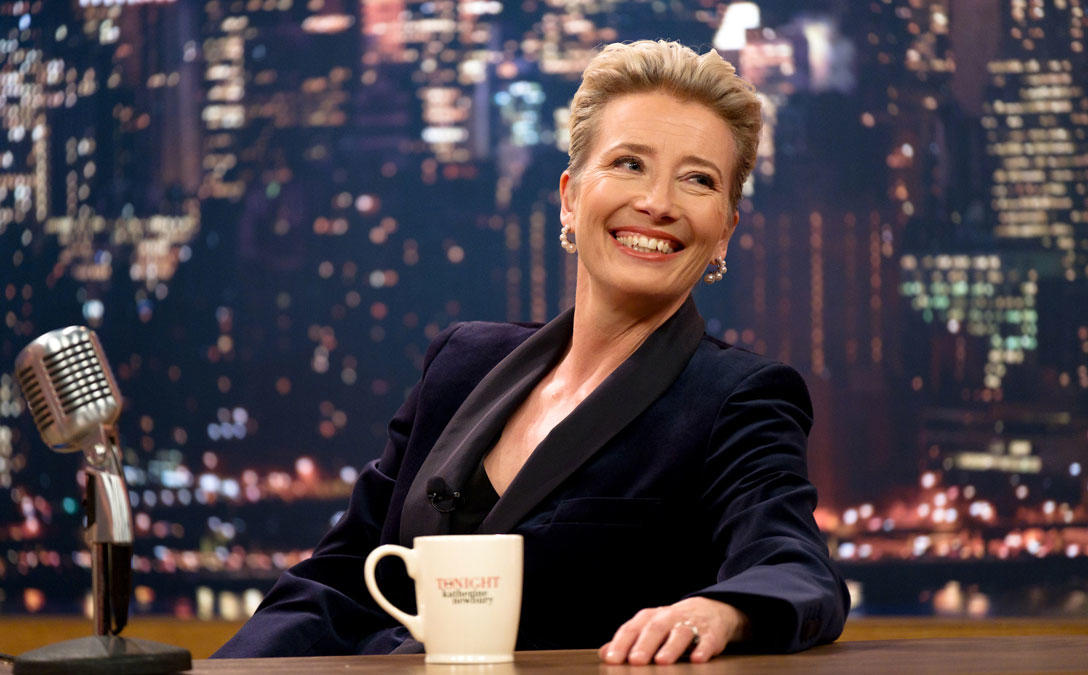 With Late Night, out Indian-American director Nisha Ganatra chronicles Katherine Newbury (Emma Thompson), a female late-night talk show host who has reached a crossroads in her career. Her appeal to the young demo is non-existent, her ratings have begun to slip, and her producer has informed her that she’ll be replaced by a decades-younger male shock jock.

In an impulsive move, she hires Molly (Mindy Kaling) to join her all-male writing staff in an effort to make her comedy more diverse. The timely script was written by Kaling, who was inspired by her tenure as the only female staff writer on her long-running sitcom The Office. When director Paul Feig had to drop out of directing duties, Kaling hired Ganatra to helm her comedy.

The decision has paid off beautifully in many ways. Ganatra and Kaling’s movie sold at Sundance with Amazon securing U.S. rights for $13 million, the most ever for a female-directed movie. Ganatra brings to it the sensibility and knowing handling of actors she’s demonstrated in countless projects since Chutney Popcorn, her 1999 feature debut, including episodes of Girls, Transparent, and Mr. Robot.

The director has also always insisted on offering a helping hand to other females looking for their initial break in an industry that hasn’t always been as obliging. Ganatra discusses what drew her to Late Night, her relationship with the film’s female stars, and why it’s important to help other minorities.

JEREMY KINSER: Late Night is a film that I feel benefits immensely from having a female director. You replaced Paul Feig. How did you come on board the project?

NISHA GANETRA: Paul Feig is someone whose movies I’ve always loved. Of course it takes a guy to get female-centered movies made and told in Hollywood. [Laughs] I was a big fan and started thinking I’d like to be the female Paul Feig and make those movies. He was attached to direct it; then Mindy became pregnant. Because of that, the delay made it line up with his commitment to A Simple Favor. He had to leave because the timeline was too strict for him to do both. When that happened, Mindy was meeting with other directors. I knew her because I’d directed The Mindy Project and we have friends in common, so I went to meet on it.

What was it about the script that interested you?

It’s rare to read something that someone else wrote that is so close to your own life experience. We just had so many things in common. It really spoke to me. It was one of those things where I could say, “I love comedy and here’s how I’d make this movie, but personally here’s what it means to me.” This character’s journey made so much sense to me and I wanted to tell it. I think it just resonated and we clicked with each other.

The idea of working with Emma and Mindy must have been alluring, as well.

Yes, there was the appeal of both Emma Thompson and Mindy Kaling. In itself you have these fantasies of who you’ll get to work with and who can bring characters to life. Emma is someone I’ve been a lifelong fan of. One thing I’ve always loved about her from her early days is she’s really funny.

It was one of those things where I realized people had forgotten how funny she is because she’s been doing such incredibly beautiful dramatic work for so long. When I met her, it was funny because her mother lives across the street, and she asked, “What’s the movie?” I said it’s a comedy called Late Night. She said, “Thank God she’s not going to be playing another good woman in an ugly frock.” I just died. She’s so funny and such a character. Emma has played a lot of good women in ugly frocks.

With so many incredible dramatic performances on her resume, it’s easy to forget how funny she can be and that she began her career in sketch comedy and doing stand-up.

She gave me these videos and recordings of her in college. If you go on YouTube you can watch everything from Footlights, her university improv troupe. I watched all the stand-up she did when she was young and she’s really good and really funny. If there was anyone you’d buy as a late-night talk show host, it’s Emma Thompson. It’s fun to tap into her swagger and brilliant comedic timing.

The film is peppered with cameos. Some, like Seth Meyers, seem like no-brainers. But then there’s Jake Tapper, who is such a serious news guy filled with integrity. How did you convince him to appear in the film?

[Laughs] I honestly don’t know how we got so lucky. I think Mindy wrote a really beautiful letter asking him to do it. She’s an incredibly talented and convincing writer. I think that worked and then we all called him incessantly. He was very confident and had just a few little changes because they have such integrity on that show. It was like he wouldn’t report on this because it seems like a rumor, but he would report on this because it’s not a rumor. It was really interesting to see where the ethics of his show lie and what he’d report on and wouldn’t. Even in a fictional world, he stays true to that and it was pretty inspiring.

You employed a predominantly female crew on this film. Was this important to you?

It’s always been important to me. Even on Chutney Popcorn, I had a lot of female crew members. Even then I was very aware of how we weren’t getting hired and the opportunities weren’t there. I figured what we need to do is give other women that break. With Chutney Popcorn, there are a whole lot of women who have the experience but don’t have a ton of credits. The DP was someone who’d gaffed a lot of movies, but no one had let her shoot, so it was her first movie. Everyone sort of bumped up to the next level of what they hadn’t been allowed to do.

We broke through the ceiling for everyone. I thought, “Now they can put Chutney Popcorn on their resume and they can get the next job.” That’s the way it works in the industry. It didn’t seem like such a radical idea at the time. It just seemed practical. Then everyone would say, “Oh my God, all your key crews were women.” It didn’t strike me as how rare that was until I started hearing and reading about it. Just for the betterment of the work, you want a diverse crew. Otherwise, you won’t get an interesting point of view from every department.

Also, being Indian-American, I didn’t want to be the only person of color in the office or on the set. That’s just weird. When you have a say in it, you can change it and you should. Everyone needs a break.

How has being a female director changed in the #MeToo era, when there’s a call for producers to hire more women?

On the one hand it took so many years to break into TV. Back then you had to have three movies and some other things under your belt before you could even get a chance at shadowing. Now I see women who have done one feature and then get their first episode. I feel like it’s gotten easier and the road is less full of obstacles. I look around and think the statistics are changing, but then I read the statistics and realize it’s gotten even worse for women. Anecdotally there’s a lot of hope and change, but systematically it’s clear that it’s still a really uneven playing field. A lot more change needs to happen and hopefully it will happen faster.

As an out filmmaker, what responsibility do you feel to authentically represent the LGBTQ+ communities?

I feel an incredibly huge responsibility. It’s why I became a filmmaker to tell the stories of underrepresented groups and people. I take that on very heavily for women, people of color, immigrants, LGBTQIA community. It’s all very important to me. I want to create three-dimensional portrays and not be treated as punchlines. If there’s anything stereotypical, I try to turn it on its head.