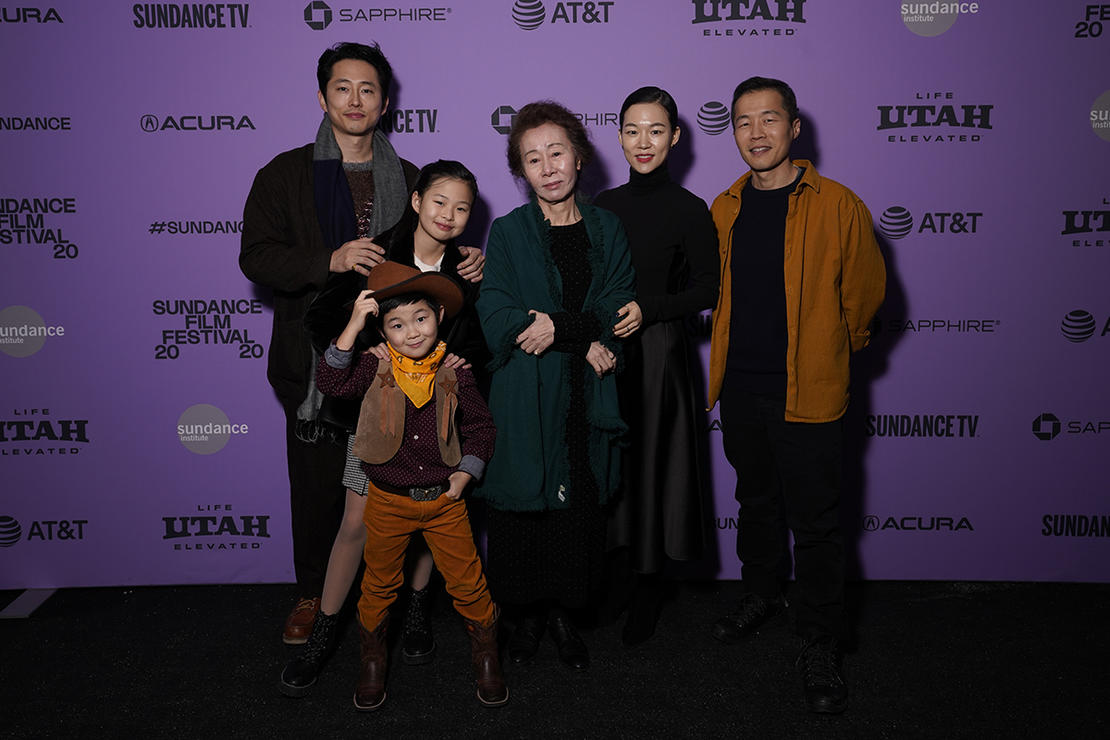 The cast and director of ‘Minari’ at the film’s premiere. © Sundance Institute | Photo by Miguel Mendoza

“There are more people in this crowd than in the town where I grew up,” explained director Lee Isaac Chung at the Eccles Theatre before the second Sundance Film Festival screening of his feature Minari.

The film is a very personal story for Chung, based on memories from when he was six years old and growing up in rural Arkansas. “I thought, I just want to throw it all out there and go for the film that I’ve always wanted to make.” And once he started, “It just flowed out of me. It was like something I was burning to tell.”

The story centers around a Korean-American family in the 1980s who move away from the city so that the father, Jacob (Steven Yeun), can follow his dream of having his own farm. But as soon as they arrive to their new home—a rundown trailer in the middle of nowhere—tensions heighten between him and his wife, Monica (Yeri Han). As Jacob struggles with the harsh realities of the life of a farmer, putting finances and relationships at risk, Monica’s mother moves in with them from Korea, giving way to the unfolding of a heartwarming, hilarious relationship between the couple’s mischievous young son, David, and his equally mischievous grandma.

Chung said that as he cast the roles of the two children, he found himself coming back to the tapes of Alan Kim and Noel Kate Cho because they made him laugh. Even his wife asked him to “‘turn on that Alan Kim kid,’ and we’d just laugh and laugh.” And Alan fittingly stole the show at the screening as well, hamming it up with hat tips and bows to the audience.

Reflecting on how easy it was to build chemistry with fellow castmates, Yeri Han shared, “In Korea we have a saying that if you sit down to eat together you’re just like a family. Just sitting down together during filming and eating together, spending time that way, made it feel like a family.”

Youn Yuh Jung, who plays the grandmother, poked fun at how sappy her co-star was getting: “I’m not that serious. … I didn’t want to do [this film] because I knew it was going to be independent, and that means I’m going to suffer. But we lived together almost, to try and save money, and we ate together, so we became a family. … That was very, very memorable to me as an old actress.” But, she continued, “I don’t want to do the hard work anymore.”

At the premiere screening earlier in the week, many of the team members’ families were in attendance—including Chung’s parents, Yeun’s parents and in-laws, and even the parents of producer Christina Oh. All of those parents flocked to Youn to take pictures with her—as Chung put it, she is “legendary” in Korea, to which she responded, “Legendary means old.” Youn joked that, as she had dinner with all those parents who were her age, it was like she was a teacher at a PTA meeting.

But on a more serious note, Yeun explained how powerful it was to have so many family members there to watch this story together. “I feel like for our generation to take on an understanding of that generation was humbling and exhausting but also incredibly enlightening,” he said. Chung revealed that “after the film ended, we were all looking at each other like, ‘We see each other.’”