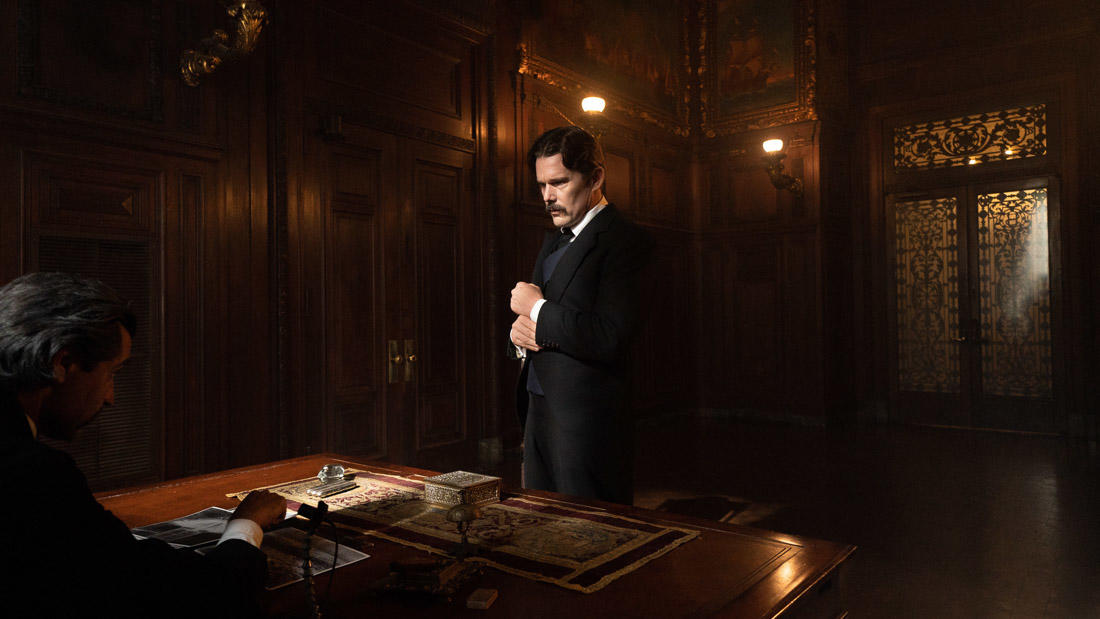 Before the world premiere of his new movie, Tesla, Michael Almereyda had some words of caution for the audience. “It’s not a conventional biopic of a neurotic mathematical inventor, so you can run for the door if you expect that,” he said. “What you’re about to see is influenced by a lot of literature written on Tesla, but also movies by Derek Jarman, novels by Henry James, and certain episodes of Drunk History.”

The film, which includes references to Google and features techno music when actress Sarah Bernhardt enters the room, is anything but conventional. Take the slapstick scene where Tesla (Ethan Hawke) quits Thomas Edison’s workshop by smashing an ice cream cone in his face. As the film points out moments later, Tesla’s departure probably didn’t happen quite that way.

During the Q&A, Almereyda explained what he meant when he said that Drunk History was an influence. “Everything’s kind of become telescoped and simplified. The way we receive our sense of history—perceived history—is kind of like Drunk History. A lot of it is speculation and rumor and guesswork.”

And so he felt free to have his Tesla croon an ’80s song at one point, simply, as Hawke claims, to hear his lovely singing voice.

MacLachlan, who plays Edison, told the audience, “It was interesting to have scenes that said, ‘This actually never happened.’ It was fun to play with the ‘what if’ of that relationship between Edison and Tesla.”

Almereyda began the premiere by saying: ‘“Every human being is an engine geared to the wheelwork of the universe.’ That’s a quote from Nikola Tesla supplied to me by Tesla scholar Ethan Hawke.”

The audience laughed, especially when Hawke added, “He’s joking.” But Almereyda, who first wrote the Tesla script in 1983, said he hadn’t come across this quote before Hawke shared it with him.

Hawke did do some reading on the enigmatic inventor he plays and found he related to him more than he realized: “My father is a mathematician, and when I was younger, it seemed like the arts and sciences were in such different universes. As I’ve gotten older, [I realize] there’s this place where math kind of reaches philosophy and intersects with it, which is really beautiful.”

“I’m not even exactly sure what [that quote] means,” Almereyda admitted, “but I think it has something to do with Tesla’s love of concentric circles and spheres. My mind loops back to 20 years ago, when Ethan and I had a movie called Hamlet premiere here. Neither movie would exist without Ethan Hawke—his commitment, his trust, his talent. I feel the movie’s as much his as mine.”

Jim Gaffigan, who plays inventor and businessman George Westinghouse, said, “You know who Tesla reminds me of? Michael. Because Michael is that independent voice who is perfect for indie films that doesn’t get caught up in commerce or expectations. And it is kind of infectious being around him. That’s why we’re all standing up here.”