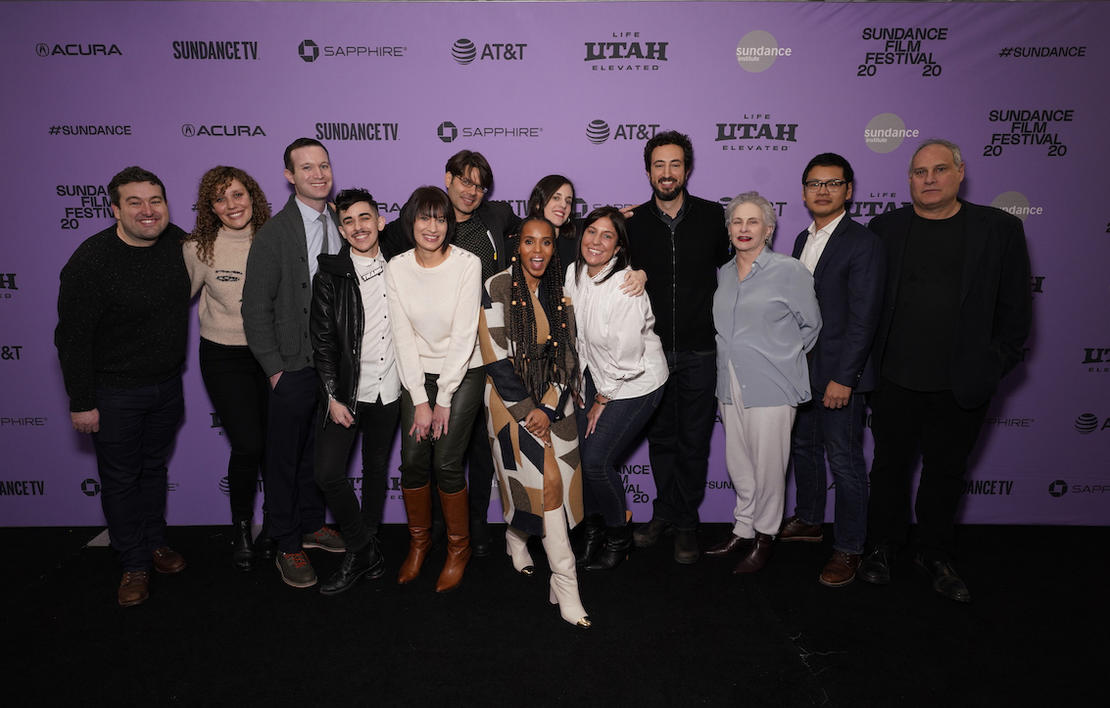 The film team of ‘The Fight’ at the world premiere. © 2020 Sundance Institute | Photo by Stephen Speckman

Filmmakers Elyse Steinberg, Josh Kriegman, and Eli Despres—whose previous documentary, Weiner, was a Grand Jury Prize winner—are back at the Sundance Film Festival with a new project, The Fight, which tells the story of the ACLU’s battle against the Trump administration on a number of civil rights cases.

At the Q&A, Steinberg shared that the decision to make the film began the night that lawyer Lee Gelernt won the first case against Trump’s Muslim ban.

“That night, I joined the protestors on the steps of the Brooklyn courthouse,” said Steinberg of the chaotic, joyous first scene in the film. “I was just steps from Lee, and I saw the expression on his face: it was joy and shock, but also he was totally surprised to be at the center of all these crowds chanting. I thought, ‘This is where we need to be. We need to be next to these guys and watch them as they fight Trump.’”

And so they did, following Gelernt and fellow ACLU lawyers Dale Ho, Chase Strangio, Brigitte Amiri, and Joshua Block for the next three years. We see the tireless lawyers responding to a seemingly endless barrage of Trump policies, including the muslim ban, the military transgender Ban, and the separation of families seeking asylum.

Day One: ‘Crip Camp’ Traces Disability-Rights Movement Origins to a ’70s Camp for Teens Where Radical Acceptance Was the Norm

‘Never Rarely Sometimes Always’: A Visceral Look at What’s at Stake in the Battle for Abortion Rights

During the Q&A, the filmmakers introduced some special guests: the ACLU lawyers featured in the film and producer Kerry Washington. Washington, whose previous producing credits include Confirmation, HBO’s film about Anita Hill, shared how she came on board: “I woke up the morning after [the Muslim ban] and called my team. I said, ‘Who is on the ground with these lawyers? These are our avengers. These people, the ACLU, they are going to be the people who are fighting for human rights. So who’s going to be with them?’ And my agents said, ‘Funny you should ask. The folks who made Weiner.’ So we all just kind of banded together to bring this story to life and capture the magic of what these people do every day.”

As Washington pointed out, “Weiner for you guys, you were following one subject or two subjects. But with this, I remember having phone calls, saying, ‘Where do we need crews the most? These incredible moments of challenging our democracy were unfolding across the country—where do we put the cameras, and when, and how often?’ The scope of what we were trying to capture was so enormous.”

Some of the moments the film captures are incredible, including Ho as he nervously preps for his first-ever Supreme Court case. The case in question: the administration’s request to add a question about citizenship to the upcoming census form, which civil rights lawyers worried was a pretext to fuel ICE deportations.

We don’t see Ho in court, but the cameras are there when he gets the court’s verdict. It’s a roller coaster of a scene as at first he thinks he’s lost—only to read more and realize he’s just won one of the biggest cases in ACLU history.

As Ho said at the screening, “The right to vote is that one right that helps protect every other right that we have.”

It’s a tough job, one that often has the lawyers missing their own children’s birthdays and working around the clock. But, said Gelernt, “What keeps you going over this many years is ultimately the clients.” He referenced the case of Miss L., whose tearful reunion after five months with her daughter closes the film: “Don’t let powerless people people fall through the cracks. Don’t let them be unseen.”