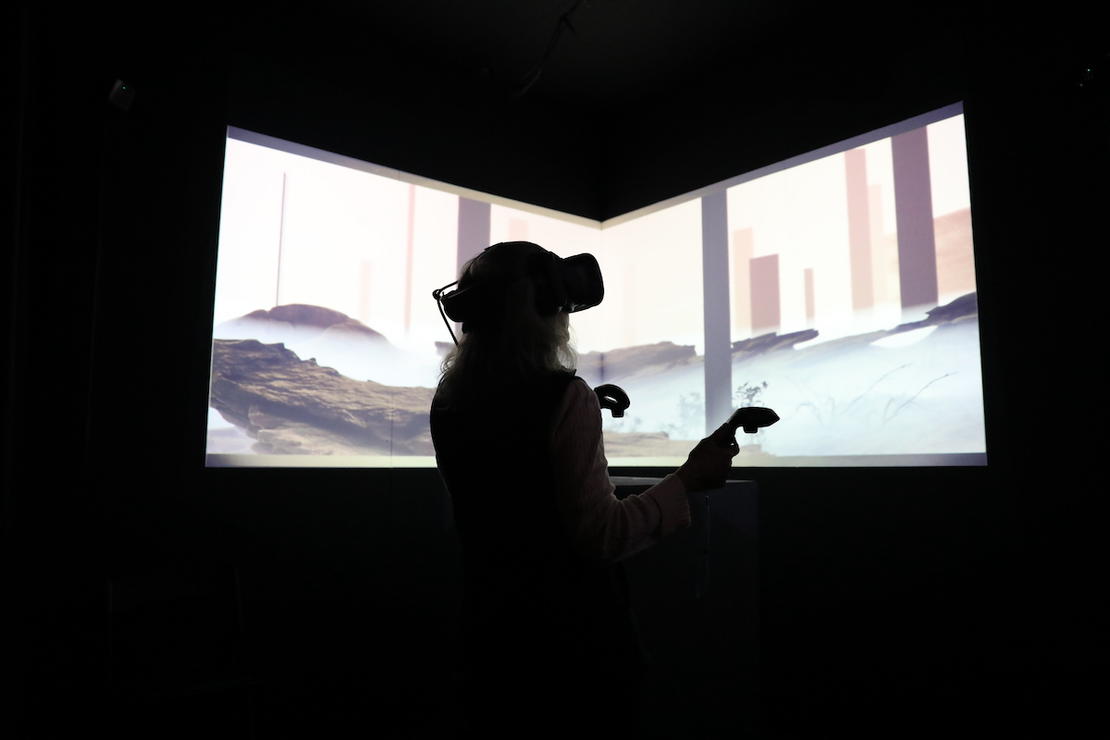 Sitting in a 360-degree swivel chair with a headset over my eyes, I became a bug. And then I became a farmer who milked bugs. And then I watched a boxing match between a bug and a whale.

Animalia Sum is a playful romp through the question of protein. What if insects became our main food supply? “Humans always think they are the center of everything,” explained Bianca Kennedy, one of the lead artists. “But what about bugs? Do they have feelings?” Complete with a sassy, David Attenborough–style narration, the exhibition surprised me with its lighthearted and imaginative storytelling and art style. It also made impressive use of the 360-degree motion—they had me spinning in circles in my swivel chair so that I could see the full picture of every scene.

Anti-Gone is many things—it’s a theatre piece, it’s a VR performance, and it’s a video game engine. It goes like this: I was sitting in an audience. Two actors stood on a stage in front of me, one wearing a motion-capture suit and the other wearing a VR headset and holding controllers. Behind the actors was a projection that showed a video game world populated by their digital avatars, moving in synch with the mocap suit and the VR set. And monitoring the entire setup was the lead artist, Theo Triantafyllidis, operating the game engine on a computer: controlling the camera angle to give us a cinematic experience.

While the actors perform on the stage, their avatar counterparts perform on the screen behind them, building a new dimension of the story with animated visuals. The performance was just over an hour, and it was an intoxicating wash of oranges and blues, of drugs and apathy, of navigating a sailboat atop a submerged city that has been claimed by the flooding of climate change.

New Frontier doesn’t just offer VR. In fact, Guisado on Sunset is just like any other short film—except that it’s designed to be watched on your phone, rather than in a theater or on a laptop. It was filmed in a phone-perfect portrait format, and all you have to do is text “tacos” to 63566 to watch it.

The story is a direct-address love poem from Terence to a woman he met in an LA taco shop, and it makes great use of live-action footage, Google searches, Craigslist, horoscopes—you name it. It feels steeped in the culture of the young, the lonely, and the plugged-in. Terence ends the short with a plea that propels the story into possible nonfiction: “And if you ever see this, hmu.” If it is true, watch the short and spread the word!

While I was in line for Hypha, artist Sebastián González described the experience to me as “classical VR.” He knew it sounded silly—has VR been around long enough for there to be “old school” and “new school”?—but when it was my turn to try it, it rang true. While many other exhibitions, both here at the Festival and beyond, are pushing the boundaries of tech and storytelling (underwater VR, anyone?), Hypha is sweet in its simplicity. I put on a traditional VR headset and picked up two traditional VR controllers, and Hypha told me a story.

And what a story it was. Safe in a cordoned-off circle in the venue, I explored with my headset as I became a spore, eating toxins underneath the tired soil in order to heal the dying trees above me. When I emerged from the ground as a mushroom, the forest was in happy bloom—and it’s possible I teared up just a little, so proud to have done my part.

Once in my swimsuit, I waded into the pool, strapped on a flotation device, put on my headset, and put a snorkel on. Then the attendant hooked me up to an anchor to keep me in one place, and I eased forward to float on my stomach. It’s true, I felt an initial panic—when’s the last time you swam with a blindfold on?—but after that subsided, I let the visuals and the soothing sound design wash over me. It was less Apollo 11 and more 2001: A Space Odyssey, and I drifted through strange caverns and beautiful bursts of light and color.