Hail Satan?: The Devil’s Guide to the Politics of Religion 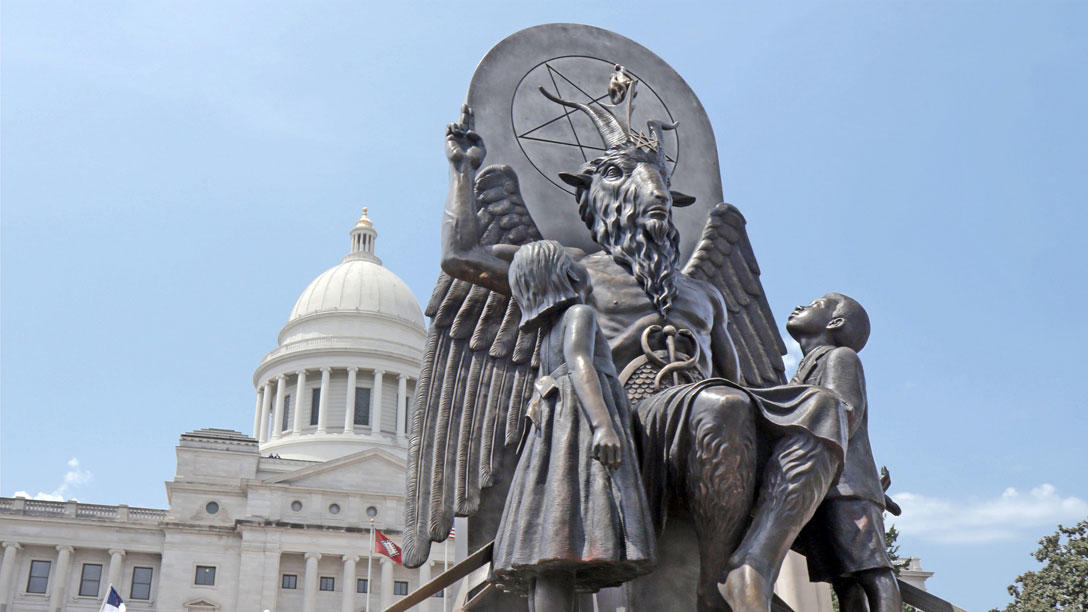 “I made a mainstream audience film that’s pro-satanism,” said filmmaker Penny Lane after a screening of her U.S. Documentary Competition entry Hail Satan? at the MARC Theater on Wednesday. “It’s not, like, an obvious move.” It may be a surprising provocation, but what’s more surprising is that the arc Lane constructs with her third Festival feature (Our Nixon, Nuts!) sees seemingly radical ideas arise as exemplars of democracy, justice, and common sense. The film follows the growth of the Satanic Temple, an organization that has thrust the religion of satanism into the American political arena. Specifically, the Satanic Temple has acted as an effective disrupter in cases of overt Christian language, symbols, and ideology being accepted or sanctioned in official government proceedings and, in the well-publicized case of a monument to the Ten Commandments being erected at the Arkansas State Capital, on government property. The organization makes good use of irreverence and comedy, and fully owns the outsider, goth-metal style lineage, but their goals are serious, and seriously smart in terms of pushing American institutions to actually honor constitutional law.

During the post-screening Q&A, Lane talked about her own way into the material, and how she sought to replicate for the audience her own evolution of thought regarding the satanists. “I had heard of the Satanic Temple just like many people did—through hilarious news headlines,” she said. As a lifelong atheist, she said she “inherently values the role of the heretic, the blasphemer, the skeptic. That’s a really important role in society, and it’s kind of a thankless task—nobody thanks you for being that person.” Yet at first she didn’t see them as much more than a satire group—valuable as such but also limited. “It was only when I had contact with Lucien [Greaves] and Jex [Blackmore]”—two leaders of the movement—“that I realized I had had it wrong. That there was something a lot more interesting and complicated going on.”

Indeed, both Greaves and Blackmore emerge as compelling voices of conviction in the film, the former overseeing the creation of Temple outposts throughout the country, creating an active and visible national organization, and serving as Temple spokesperson in the media, and the latter, a Detroit-based performance artist, staying true to the movement’s radical, revolutionary ethos. One seeks to disrupt from within, the other from without existing political structures, and this conflict eventually leads to a split. Blackmore was in the audience for the screening—Lane thanked and spoke admiringly about her from the stage—but she didn’t take part in the Q&A. “It’s something that I thought was interesting from the very beginning,” Lane said. “How could this nascent movement maintain its super radical character as it attracted more and more people, and as the stakes got higher and higher for the people involved? They always wanted to use the law to show what real religious diversity looks like. What differentiated the Satanic Temple from satanists in the past was their desire to be in the public to engage with systems of power.”

“Culture matters,” she continued. “Symbols and ceremonies and slogans—it’s so easy to think they don’t matter. Like who cares if politicians swear on the bible? It’s just a symbol, who care what the national motto is? But part of the argument of the film is that it really does matter.”

Considering her sympathetic treatment of her subjects and their convictions in the film, it’s inevitable that someone would ask Lane if she’d become a believer along the way. “It’s very funny. I never thought I would be in a place in my life where I would have to explain why I’m not a satanist,” she said. “But I’m not. And all I can say is that while I unabashedly admire this religious movement—really with my whole heart—and I consider myself an ally of the satanic movement politically, and appreciate their religious doctrine—I think it’s super fucking smart, and the future of religion in modernity—at the end of the day, it’s a religious identity, and that comes from somewhere within that’s hard to define if you’re an atheist. You can’t just call it your soul. I love them, but I’m not [a satanist].”

Yet though she didn’t become a satanist, she credited the movement and the making of this film for changing her ideas about religion in general. “I went into it as someone who had just a baseline atheist, knee-jerk hatred of religion. It’s embarrassing to admit that now because it was really only in doing this film that I understood how amazing religion is, how important it is to humans, and why we keep coming back to it,” she said. “So for me it was a very surprising journey from really not understanding religion, like sort of thinking it’s like a mental illness, to loving it. Part of that journey was, I hope, reproduced for people in the audience.”

Near the opening of The Brink, her vérité look at alt-right advocate Steve Bannon, director Alison Klayman observes her subject comparing the effectiveness of two different concentration camps: Bannon praises the architecture and efficiency of Birkenau over the better-known Auschwitz. It’s a disturbing, fly-on-the-wall moment that caused the premiere audience to gasp aloud, perhaps surprised at their ability to be shocked at Bannon’s antics. Klayman said that the scene, which sets the tone for the 90 minutes to follow, was completely unprompted. “I couldn’t believe the glee he had when describing the efficiency and mechanics of it,” she said. “I couldn’t believe he was treading on this territory, which was why I was making the film.” Tellingly, the director dedicated the film, which Magnolia Pictures will release in theaters on March 29, to her Holocaust survivor grandparents.

Klayman, along with producer Marie Therese Guirgis (a former employee of Bannon’s) and crew, followed the daily life of the Red Bull–swilling former Trump campaign strategist from the time he was ousted from the White House through his meetings with Europe’s right-wing leaders in his effort to create a “united populist agenda” and up to the crushing defeat of candidates he touted in the 2018 midterm elections. Klayman ties in the concentration camp conversation cold opening of her film to Bannon later asking himself, “What would Leni Riefenstahl do?” while editing his own documentary, Trump at War.

When she began work on this project, Klayman realized that making an observational film, rather than a standard biographical look at Bannon, was essential and would allow him to expose his flaws on his own. “I don’t think he sits down in good faith to give you answers; he’s trying to convert people,” she said. Believing that interviews with him would not prove to be illuminating, she told Bannon that she required as much access to him as possible and insisted on complete creative control. Although he took some initial convincing (he told Guirgis the film would destroy him), he eventually relented.

During the Q&A, Klayman was asked if she thinks Bannon is a racist. “I don’t think he thinks he’s a racist and I don’t know what’s in his heart,” she answered as diplomatically as possible. “That’s the whole point of this movie. Where are his hard-and-fast lines? I think they don’t take a strong stand that racism is unacceptable, even if he starts a speech by saying it doesn’t matter about your race, gender, or religion. No matter what people think you think, it’s the actions that you take.”

The Disappearance of My Mother

How do you create a detailed portrait of a famed model turned searing critic of the fashion industry who has an abiding distrust of the camera?

When Italian director Beniamino Barrese saw his mother, Benedetta Barzini, getting older, angrier, and more depressed each time he visited her—even talking about packing her belongings and “disappearing” forever—he decided to create a lasting image of her before he lost her.

Benedetta reluctantly agreed to the project only out of her love for him and her exhaustion from his relentless pestering, and it’s clear throughout The Disappearance of My Mother that being on camera is torturous for her. Barrese documents the battle between the woman, trying to live a life that’s finally free from the gaze of the camera, and her son, who’s clinging to a means to preserve her.

Barrese wanted to show the world what he saw in his mother—not just a model but also a journalist and professor: “For me, she was a philosopher.” He “wanted to [do] justice to an overrepresented woman that was captured by her image and was frozen, as she says, in a “conception.” But for Benadetta’s part, she doesn’t believe it’s possible to capture anyone’s true self on film.

When asked if he felt that he was able to show at least a glimpse of her true identity, Barrese said, “As a person who wants to make images, I have a responsibility for the person that I capture”—but “it’s an unanswered question. For me, it’s yes, but she would say no. In fact, she said no. She said, ‘This is not me; you didn’t get me. I think this woman that you have on screen is quite nice—I like her—but it’s not me.’”

Barrese commented, “I don’t know if I achieved what I wanted, but I gave another perspective of her. … I’ve been able to reason through film on this topic of why [we] make images and how women [can] find images for themselves”—which, he admits, “is really annoying because obviously I am a man that created another image of another woman.”

As for whether his film project made his mother change her mind about going away, Barrese confirmed that, though she has felt refreshed by the trip to the United States for the film’s premiere, she has held fast to her desire and still very much wants to disappear.