Now Streaming: Gloria Steinem Had Faith That Julie Taymor Would Do Her Life Justice in ‘The Glorias’ 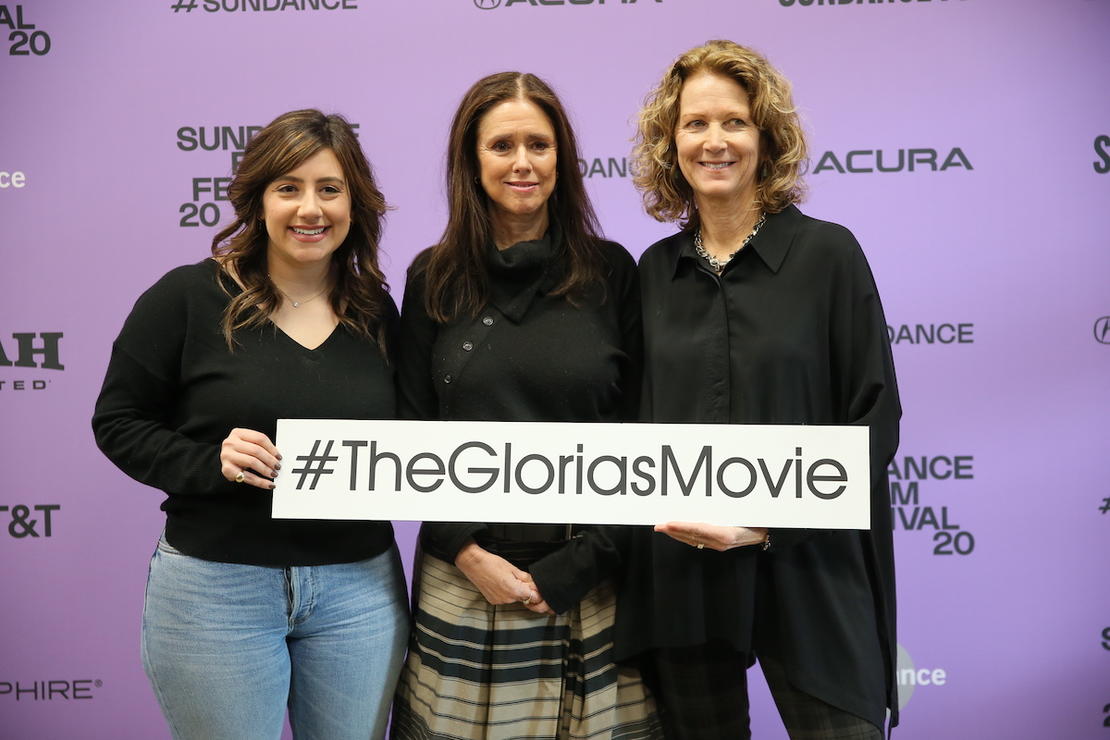 The filmmakers at the premiere of ‘The Glorias.’ © Sundance Institute | Photo by Jemal Countess

At this year’s Sundance Film Festival, writer/director Julie Taylor arrived in Park City for the debut of her sixth feature, The Glorias, a biopic of feminist icon Gloria Steinem. The film begins streaming on Wednesday, September 30. Below, see what Taymor had to say at the film’s world premiere.

The Glorias tells the story of legendary women’s rights activist Gloria Steinem, played by four different actresses, including Julianne Moore and Alicia Vikander. A very special guest made it to the film’s world premiere: Steinem herself, there to discuss the movie with director Julie Taymor.

As Taymor admitted before the screening began, she had just finished the ambitious biopic on Monday night: “We’ve never had more than 20 friends and family see this film, so this is scary for us. But we’re all so honored that Sundance took the film and that you’re the audience that’s going to see the first showing.”

Before introducing Steinem, Taymor said, “When I hear Gloria being introduced as an icon, and every time that word comes up, I see a statue that’s wooden or stone or gilded or religious. And I think, ‘No, that’s not Gloria.’ Gloria Steinem is the most living human being. And that’s what my collaborators and I hope this film brings forth is her humanity.”

The experimental aspects of the film—including animated sequences and scenes in which all four Glorias interact—might have added to the film’s running time, but Taymor didn’t see anything she could have cut. “How can you do small?” Taymor said about the film’s scope, which follows Steinem from childhood through the first Women’s March in 2017.

‘Never Rarely Sometimes Always’: A Visceral Look at What’s at Stake in the Battle for Abortion Rights

The film began with a simple phone call, Steinem said. “Julie called me up and said she wanted to make a movie of the road book. I think my exact words were, ‘You’re a genius. You can do anything you want.’ If you’ve seen her movies, you know that she is able to put motion on screen in an unprecedented way. And then, people would ask me afterwards, ‘Do you have approval?’ And I was not 100 percent sure what ‘approval’ meant. But I said, ‘Look, I have something better than approval. I have faith.’”

Unlike her previous biopic, Frida, about the late artist Frida Kahlo, Taymor was able to get Steinem’s input on the script, which includes scenes that weren’t in My Life on the Road, the autobiography that was the basis for the film.

Gloria Steinem at the premiere of ‘The Glorias.’ © Sundance Institute | Photo by Jemal Countess

Taymor admitted that “some of the things in the film aren’t ‘exactly true.’ Like, was Dolores Huerta at the convention? But I knew that that conversation between Dolores [played by Monica Sanchez] and Gloria about pro-choice was absolutely fundamental to the movie. So I asked Gloria if I could stage that—which is a true interaction—in that setting.”

Steinem gave her approval, adding, “I asked Dolores, and she said yes.”

Taymor said that freedom also applied to recreating some of the settings from Steinem’s childhood. “What Gloria said was, ‘If it’s emotionally right, it’s right,” Taymor said.

When an audience member praised Taymor for creating a film that her 27-year-old daughter would love, Taymor thanked her, saying, “We don’t just want the young women. We want the young men. And our mothers. My mother is 98 years old. She’s seen the movie three times. Maybe the second time, she forgot the first and maybe the third time, she forgot the second. But, this is her favorite thing I’ve done, because this is her life. We really feel that the cross-generational aspect of the film is a big part of it.”

Steinem added, “That’s why it’s so important that young women, old women and men, all the generations, work together. We all have something different to bring. Being old is good, because you have hope: you remember when it was worse. And being young is great because you’re mad as hell. So we need each other. And I think that’s the message of the film.”