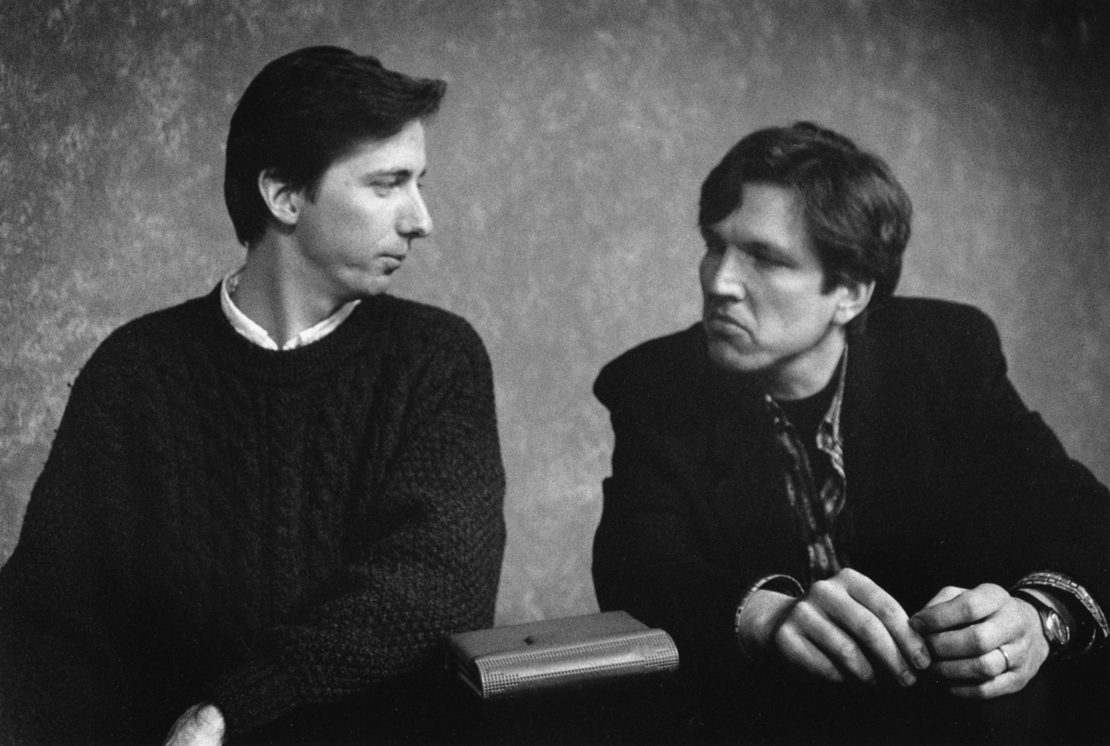 Julie Dash in Park City at the 1991 Sundance Film Festival, where she premiered her debut feature, ‘Daughters of the Dust.’ ©1991 Sundance Institute | Photo by Sandria Miller

The year was 1991, and something big was happening in Park City. It was a landmark year for the Sundance Film Festival, as more than 2,000 people converged in the mountains of Utah to celebrate the 10th anniversary of the Sundance Institute. In addition to a retrospective section highlighting gems from the Festival’s past—among them, Peter Masterson’s The Trip to Bountiful and Joyce Chopra’s Smooth Talk—the program’s 129-film lineup included a string of world premieres that have since become integral to the indie film canon.

The ’91 Festival also saw the birth of Park City at Midnight (conceived as a “special showcase of the most challenging but rewarding experiences from around the world, brought to you at the most arduous hour”), the installation of new Festival director Geoff Gilmore (following the departure of Tony Safford), and a salute to the great Robert Altman (who also happened to be showing his latest project, Vincent and Theo). Meanwhile, off-screen, Julie Dash, Donna Deitch, Penelope Spheeris, Joan Micklin Silver, Nina Menkes, Yvonne Rainer, and Amy Taubin convened for the Women Directors panel.

Below, learn more about some of the award-winning films from 1991 (and get details on where you can watch them today).

Barbara Kopple’s American Dream became the first film to win three honors on awards night—the Audience Award: Documentary, the Filmmaker Trophy: Documentary, and the Grand Jury Prize: Documentary (an honor it split with Jennie Livingston’s Paris Is Burning). “It took five long years to make and took an incredible toll on me,” Kopple said on awards night of the project, which centers on a contentious labor strike at a Hormel plant in Austin, Minnesota. [WATCH IT NOW]

From the Catalog: “American Dream is not a black-and-white story of the injustices of corporate America. What emerges from the struggle is a strategic battle within the union itself, which pits the local against the international and fragments the union.” —Geoff Gilmore

2. DAUGHTERS OF THE DUST

Julie Dash’s ‘Daughters of the Dust’ won a Special Jury Prize for Cinematography.

Julie Dash’s lyrical debut feature about three generations of Gullah women, Daughters of the Dust, won the Excellence in Cinematography Award at the ’91 Festival, but as she recalls, audiences weren’t quite sure what to make of it. “At the time people were saying ‘Hmmm… that’s not like a film I’m used to seeing here,’” she recounted to Nelson George in 2012 of those early screenings. “It doesn’t seem familiar. What is that?’ It was kind of mixed, which is always good because you want to do things that provoke, confound, but more importantly soar the imagination.” The project went on to win strong critical praise and has been added to the National Film Registry. [WATCH IT NOW]

From the Catalog: “Daughters of the Dust is the work of an accomplished director who enlivens her research with expressive cinematic nuances. Slow motion, striking color, voiceovers, dreams and flashbacks enrich the drama, lending it a lyrical quality that is as unorthodox as the story.” —Alberto Garcia

Trivia: With Daughters of the Dust, Julie Dash became one of the first Black women directors to have a general theatrical release in the U.S.

Jennie Livingston spent years chronicling New York City’s ball culture in the 1980s, turning a spotlight on memorable performers like Dorian Corey, Pepper LaBeija, and Angie Xtravaganza, as well as their respective houses within the scene. The resulting documentary—which was edited by the late Jonathan Oppenheim—won a Grand Jury Prize: Documentary at the 1991 Festival, where critics and audiences praised it for its exploration of race, gender, sexuality, and class. [WATCH IT NOW]

From the Catalog: “Livingston has spent over three years assembling the footage, and doing the interviews which comprise this document, and her stylish direction betrays no sign of superiority or condescension. Paris Is Burning is finally a tribute to these ‘outcasts,’ to their ingenuity and perseverance, and ultimately to their strength.” —Geoff Gilmore

Trivia: In 2016, Paris Is Burning was added to the National Film Registry for its cultural, historical, and aesthetic significance.

Todd Haynes’s debut feature, Poison, won the Grand Jury Prize: Dramatic at the ’91 Festival and has since gone on to attain cult status, but it wasn’t without controversy. “You’re all the brave ones who weathered the film,” the writer-director remarked after one screening of the experimental project. Composed of three stories with different characters from different time periods, Poison—an early entry in the New Queer Cinema movement—was inspired by the writings of French novelist Jean Genet and was shot on a budget of $250,000. [WATCH IT NOW]

From the Catalog: “Within Poison‘s innovative, disjunctive mix of popular genres, each story remains visually distinct. … The acting is superb, especially in ‘Homo,’ where the tension is raised a notch by each meaningful glance and unspoken word. And obviously the careful editing is unequaled. Poison is a uniquely ambitious project accomplished by an imaginative filmmaker.” —Alberto Garcia

Trivia: Before he made Poison, Haynes screened his legendary project Superstar: The Karen Carpenter Story, at the 1988 Sundance Film Festival. Shot over the course of 10 days at Bard College and featuring a cast of (yes, actual) Barbie dolls, the cult film has long been available via bootleg only.

“I remember it like it was yesterday—it was a blast, man,” Richard Linklater told us when we interviewed him for the film’s 20th anniversary. His now-iconic experimental portrait of Austin and the eccentric citizens who called it home wasn’t originally a shoo-in: “The funny thing about Slacker and Sundance … is I’d submitted a really rough cut the year before we actually played there—and it got rejected,” he explained. The film had already become a local phenomenon by the time it hit Park City in ’91, but he described Sundance as the film’s coming-out party: “That was where everybody saw it; to play there was a huge stamp of approval.” [WATCH IT NOW]

From the Catalog: “Despite its episodic nature, one never senses redundancy in the material. The camera sweeps from one situation to the next in a strongly choreographed performance. Slacker is a seriously ironic work from a filmmaker whose thoughts and voice are fresh.” —Alberto Garcia

6. STRAIGHT OUT OF BROOKLYN

Matty Rich was 19 when he premiered ‘Straight Out of Brooklyn’ at Sundance.

Pre-GoFundMe or Indiegogo, crowdsourcing looked a bit different for independent filmmakers. After maxing out credit cards to shoot the opening scene of his debut feature, Straight Out of Brooklyn, Matty Rich put out a direct fundraising appeal over local radio station airwaves. Eventually—with some help from his mentor, Jonathan Demme (an alum of the ’85 Fest)—Rich managed to complete the project and premiere it at the ’91 Festival, where it won a Special Jury Prize. Rich took a hiatus from filmmaking after 1994’s The Inkwell (another Festival selection) but currently has several upcoming projects in the works, so stay tuned. [WATCH IT NOW]

From the Catalog: “Rich offers us a strong and challenging social drama marked by a grittily realistic style and an ensemble of exceptionally fine performances. No easy answers are given for the issues raised, but the film’s depth of perspective and attention to detail identify a filmmaker we’ll be looking to in the future.” —Geoff Gilmore

Trivia: Rich remains one of the youngest directors to ever premiere a film at the Sundance Film Festival. He began the project as a 17-year-old high school student in Red Hook, Brooklyn, and was only 19 when it had its premiere in Park City.

After its premiere at the Toronto Film Festival several months earlier, Hal Hartley brought Trust to Park City for the ’91 Festival’s Dramatic Competition, where it was one of two films to win the inaugural Waldo Salt Screenwriting Award (the other being Joseph B. Vasquez’s Hangin’ with the Homeboys). The film features a standout performance by the late Adrienne Shelly, who had collaborated with Hartley on his Sundance debut, 1989’s The Unbelievable Truth. [WATCH IT NOW]

From the Catalog: “Trust is a dark film, but it maintains a healthy spirit of satire. Hartley’s direction is smart, and his dialogue is quotable. Against stylishly flat, pop backdrops, his characters exchange lightning-quick banter, delivered with a mechanical flair, which adds to the dry humor.” —Alberto Garcia