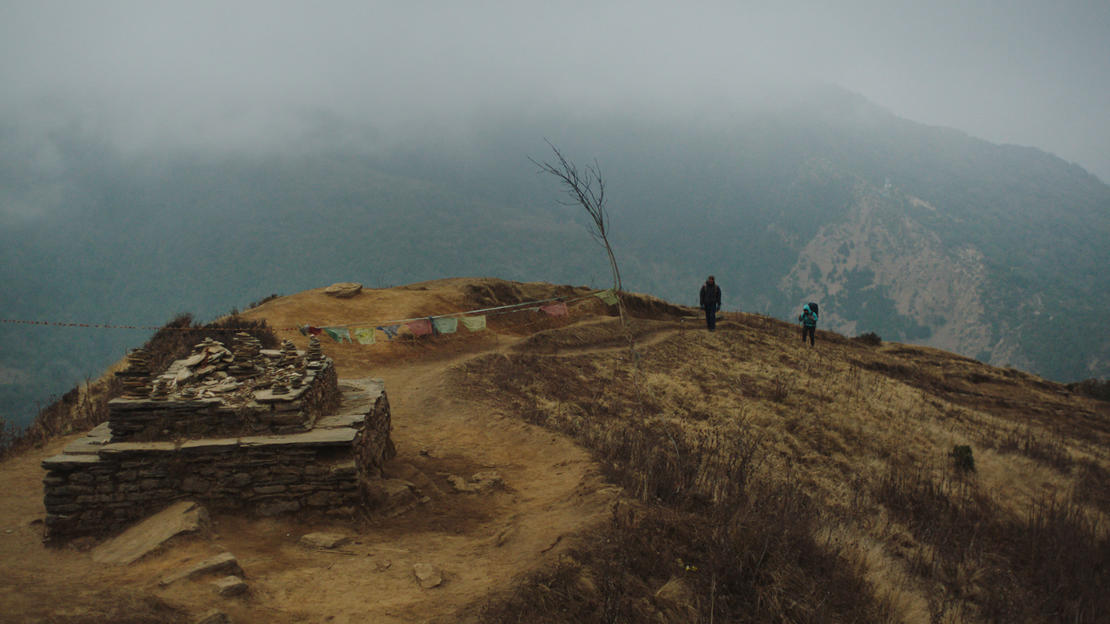 The first thing you’ll experience in The Mountains Are a Dream That Call to Me is the single gong of a bell. In Buddhist tradition, bells are often used to begin meditation sessions, to ward off negativity, and to bring listeners back to the present moment. And that’s precisely what this bell sound does for the viewers—invites them into a new space.

“There’s no wrong way to watch this film,” said director Cedric Cheung-Lau at the start of the film. “I urge you to trust yourselves, trust what you’re feeling, and let the film wash over you.” And if you do, you’ll be rewarded with a contemplative collage of the Annapurna Mountains: the guides, the trees, the travelers. The camps, the snow, the rocks. The rivers, the cairns, the wind. Every shot is long and meandering, whether it’s tracing the ridge of a sunrise-orange mountain all the way up to the moon or swaying back and forth between two people in conversation over dinner.

When asked what inspired him to make the film, Cheung-Lau explained, “My entire life, I wanted to travel, but I never knew where to travel. I realized I just had to buy a ticket. So I bought a ticket to Nepal—a place I had never really thought about. I was in awe of the place. The people were so warm and giving, and the space was just transcendent.

“Later, I found myself pulled back there. I was unable to resist returning. At that point, I began to think about a film—what this feeling was, what this meant, why it was such a strong urge, and why I had to respond to it.”

One scene in The Mountains captures a beautiful and frightening avalanche, and an audience member asked Cheung-Lau how his team got the footage. “We were lucky,” he said simply. “For all of us, it’s being open to the space. This might sound like a bit much, but—when the mountain spoke to us, we would be there to try to capture it.” He described it as “nature giving us magic.”

Even though the footage is gorgeous, it was a challenge to shoot on the trail. “We had fifteen porters in total [helping us],” explained producer Madeleine Askwith. “We all had our backpacks—25 pounds for us and 50 for them. There was definitely one basket with just C-stands sticking out of it.”

Producer Alexandra Byer explained, “We also had a nine-person crew of technicians we brought from the States. And we just had to find the craziest people, who would be down to climb a mountain for no money. We shot in December, which is one of the coldest months in the Himalayas, so we were essentially just uncomfortable the whole time. But truly, even when people were sick or uncomfortable or freezing cold, they had a smile on their face.”

“A lot of tea and vitamin C,” added Askwith.