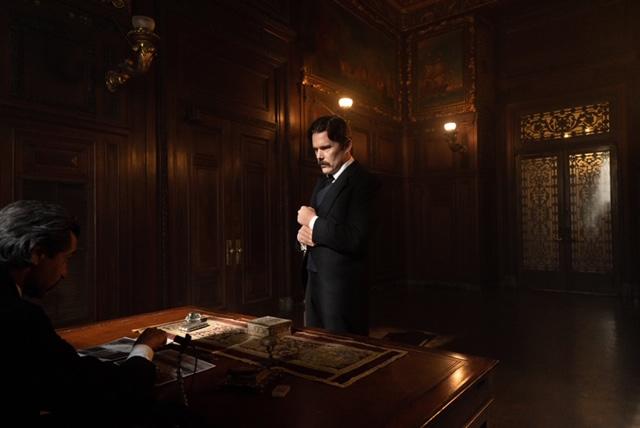 The awards were presented at an afternoon cocktail reception at High West Distillery. These activities are part of the Sundance Institute Science-In-Film Initiative, which is made possible by a grant from the Alfred P. Sloan Foundation.

“Science is key in bridging the gap between the real and the potential, and seeing stories of science told boldly, independently, and with creative vision can spark our own imaginations.” said Keri Putnam, Executive Director of Sundance Institute. “With the aid of the Sloan Foundation, works that tell these stories can enlighten us on the progress we’ve made and help to inspire us to take on the challenges of the future.”

“We are thrilled to partner with Sundance Institute for our 18th year in a row and to honor Michael Almereyda’s Tesla with Ethan Hawke in the title role as our juried feature film prize winner,”said Doron Weber, Vice President and Program Director at the Alfred P. Sloan Foundation. “Nicola Tesla was a technological pioneer far ahead of his time and this highly original film for the first time in movie history does both technological and poetic justice to this enduringly fascinating and enigmatic figure. We are equally thrilled to develop with Sundance an exciting pipeline of new screenplays and teleplays including The Plutonians, Tidal Disruption and Higher, encompassing a brilliant satire about astronomy and truth, a psychological drama about sexual harassment in science and a social and historical epic about the construction of the Empire State Building. These three new winning scripts along with many previous Sundance winners still in development—and dozens more projects with our five other film partners across the country—comprise one of the best lists in the film industry and show yet again the science makes for great storytelling and great characters.”

The eighteen-year partnership between the Alfred P. Sloan Foundation and Sundance Institute forms part of the Sloan Foundation’s nationwide Film Program, which includes support for six of the nation’s leading film schools and seven screenwriting development partners and has resulted in over 25 completed feature films. In addition to Hidden Figures, originally supported by a Sloan book grant, the film program has long championed stories about women in science from Bombshell: The Hedy Lamarr Story to stories about Louise Pearce, Rosalind Franklin, Marie Curie, Lise Meitner and Jane Goodall. The program has also supported many works about the role of technology in daily life, including the impact of machine learning, robotics and artificial intelligence. Sloan has supported feature narrative films such as Adventures of a Mathematician, One Man Dies a Million Times, The Sound of Silence, To Dust, The Catcher Was a Spy, The Man Who Knew Infinity, The Imitation Game, Experimenter and Operator, along with documentaries, such as the 2020 Sundance Film Festival selection Coded Bias and several new projects, including episodic television, in development. The program has also given early recognition to stand-out films such as The Aeronauts, First Man, Searching, The Martian and The Boy Who Harnessed the Wind, last year’s recipient of the Feature Film Prize.

Tesla has been awarded the 2020 Alfred P. Sloan Feature Film Prize and received a $20,000 cash award from the Alfred P. Sloan Foundation at today’s reception. The Prize is selected by a jury of film and science professionals and presented to an outstanding feature film focusing on science or technology as a theme, or depicting a scientist, engineer or mathematician as a major character, and will be included in the 2020 Sundance Film Festival closing Awards Night.

The jury stated, “For its bold and original approach to cinematic storytelling, and for its beautifully shot portrayal of a technological pioneer and visionary futurist who foresaw our age 100 years ago, the 2020 Alfred. P. Sloan Feature Film Prize goes to Michael Almereyda’s Tesla.”

The Plutonians (U.S.A.) / Tim Delaney (Director, Screenwriter) — When the redefinition of planethood threatens to exclude Pluto, a motley coalition of astronomers and outsiders conspires to defend it by any means necessary, challenging what it means to be special in an indifferent universe.

Tim Delaney is a writer and director from Bronxville, NY. He is a graduate of the University of Pennsylvania, where he was awarded Best Undergraduate Screenplay, and currently resides in New York where he attends NYU’s Graduate Filmmaking Program as both a thesis student and an adjunct professor.

Kiran Deol will receive a $15,000 cash award from the Alfred P. Sloan Foundation at this year’s Sundance Film Festival for Tidal Disruption. Previous winners include Logan Kibens’s Operator, Darcy Brislin and Dyana Winkler’s Bell and Rob Meyer’s A Birder’s Guide to Everything.

Kiran Deol is a filmmaker, comedian, and actor based in Los Angeles. Her first film, Woman Rebel, a documentary about women rebel soldiers, was nominated for an Emmy, shortlisted for an Oscar and distributed by HBO. She currently stars in as ‘Mallory’ in the new NBC/Hulu series Sunnyside from Mike Schur and Kal Penn, tours nationally as a standup comedian and can be heard on the Crooked Media’s Hysteria podcast. Tidal Disruption is her first feature film

Courtney Smith will receive an $10,000 cash award from the Alfred P. Sloan Foundation at this year’s Sundance Film Festival for Higher.

Higher (U.S.A.) / Courtney Smith (Screenwriter) — The Empire State Building, a symbol of American can-do, is a dream that nearly was not. Sparked by the Roaring Twenties and fueled by New York’s “Race to the Sky,” the building was birthed right into the Wall Street Crash of 1929. This upstairs/downstairs drama will explore the lives of those brave men and women — immigrants, investors and industrialists — who risked it all to raise the rafters on the world’s tallest building while the world around them fell apart.

Courtney A. Smith, an NYU/ Tisch grad, is a screenwriter living in Los Angeles. She was a Second Round Finalist at the Austin Film Festival (2015) and her feature film Archangel (co-written by Patrick Massett) received offers from Blumhouse, Sony International and IM Global. She is currently working on Swagger for Apple TV+ and has worked in writer’s departments on shows including Friday Night Lights, The Get Down and The Blacklist.

About the Sloan Foundation

The New York-based Alfred P. Sloan Foundation, founded in 1934, is a non-profit philanthropy that makes grants for original research and education in science, technology, and economic performance. Sloan’s program in Public Understanding of Science and Technology, directed by Doron Weber, supports books, radio, film, television, theater and new media to reach a wide, non-specialized audience and to bridge the two cultures of science and the humanities.

Sloan’s Film Program encourages filmmakers to create more realistic and compelling stories about science and technology and to challenge existing stereotypes about scientists and engineers in the popular imagination. Over the past two decades, Sloan has partnered with some of the top film schools in the country – including AFI, Carnegie Mellon, Columbia, NYU, UCLA and USC – and established annual awards in screenwriting and film production, along with an annual best-of-the-best Student Grand Jury Prize administered by the Tribeca Film Institute. The Foundation also supports screenplay development programs with the Sundance Institute, Tribeca Film Institute, SFFILM, the Black List, and Film Independent, the Aretha Film Festival and the North Fork TV Festival and has helped develop such film projects as Thor Klein’s Adventures of a Mathematician, Jessica Orek’s One Man Dies a Million Times, Michael Tyburski’s The Sound of Silence which premiered this year at Sundance, Shawn Snyder’s To Dust, Ben Lewin’s The Catcher Was a Spy, Morten Tyldum’s The Imitation Game, Matthew Brown’s The Man Who Knew Infinity, and Michael Almereyda’s Experimenter. The Foundation has also supported theatrical documentaries such as Coded Bias, Oliver Sacks: His Own Life, The Bit Player, BOMBSHELL: The Hedy Lamarr Story, Particle Fever, and Jacques Perrin’s Oceans.

The Foundation has an active theater program and commissions about twenty science plays each year from the Ensemble Studio Theatre, Manhattan Theatre Club, and the National Theatre, as well as supporting select productions across the country and abroad. Recent grants have supported Bess Wohl’s Continuity, Charly Evon Simpson’s Behind the Sheet, Chiara Atik’s BUMP, Lucy Kirkwood’s Mosquitoes, Nick Payne’s Constellations, Lucas Hnath’s Isaac’s Eye, and Anna Ziegler’s Photograph 51. The Foundation’s book program includes early support for Hidden Figures: The American Dream and the Untold Story of the Black Women Mathematicians Who Helped Win the Space Race, the highest grossing Oscar-nominated film of 2017 and the recipient of the Sloan Science in Cinema Prize at the San Francisco Film Society in December 2016.