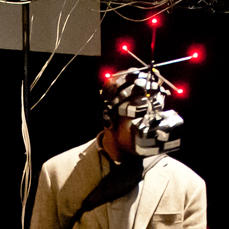 When Sundance introduced the first New Frontier program at the Festival in 2007, in a cramped basement space on Main Street in Park City, it felt like a heady first glimpse into a future in which cinema was migrating beyond the theatre—even beyond movies. Just six years later, we’re living in that future. This year’s survey of multimedia, multi-platform projects, experiments, performances, and installations still leans forward and anticipates new developments in cinematic culture, but it’s also about how we live now. We carry movies around on our phones and in our pockets, we remix visual culture on our laptops, and our virtual relationships are as relevant to us as our physical ones. The future, in many respects, has arrived; the question remains, what are we going to do with it.

Aptly entitling this year’s program “The Future Normal,” Senior Programmer and New Frontier Curator Shari Frilot identified the efforts of artists to redefine and reimagine how emerging technologies and industry trends could be employed in our lives. It’s a simple but crucial matter of direction: Do we aspire to get beyond ourselves, or work to know ourselves better? “Consumer culture positions technology to expand and transcend human limitations,” Frilot says. “But the works here have another vision, where media technology integration really sustains our humanity, fortifies the cornerstones of what makes us human—our social nature and creativity.”

Now installed at The Yard in Park City, a far more spacious and inviting place than last year’s charming, but cramped Miner’s Hospital location, New Frontier begins, fittingly, with a broadside against the bloated Hollywood dream machine. On a massive, wall-filling screen, Marco Brambilla’s Evolution: Megaplex crams hundreds of looped, decontexualized movie clips onto a scrolling 3-D landscape. The piece is a direct homage to the murals of Breugel and Bosch, with scenes of engaged, engorged, and bloodthirsty peasantry replaced with gifs of Dirty Harry’s strut, Thelma and Louise’s careening convertible, Ben Stiller’s over-the-top, bullet-riddled death-scene from Tropic Thunder, and assorted droogs, droids, explosions, and fleshly indulgences. The clips, as well as the piece itself, it stuck on a perpetual loop—iconic gestures isolated and remixed into meaninglessness.

“It’s consistent with the way we see entertainment now,” says Brambilla, discussing the way we upload, access, and encounter films via YouTube clips. “It’s removing all the storytelling, all the more emotional parts of content, and you’re left with the most superficial, sensational, temporal part of the content.” Yet Brambilla’s broadside is a fascinating, garishly beautiful object of its own, creating the potential for an emotional engagement, even if its individual parts don’t merit. “I worked very hard to make it aesthetically engrossing, so you’re kind of swept away in something that means nothing,” he counters. “Technology has created this artificial dislocation between our ability to connect with something emotionally and our ability to be seduced by something visually.”

By contrast, Ho Tzu Nyen’s installation film The Cloud of Unknowing eagerly engages with the viewer on its own mysterious terms. On a large, rear-projected screen, eight characters in eight apartments encounter a cloud, which takes the form of a vaporous mist as well as a character. Accompanied by a meandering, dramatically modulating (and occasionally floor-shaking) soundtrack and a smoke machine that keeps the physical space in a milky haze, the terrain of the film extends beyond the screen, even to the cloud-like white beanbags that serve as seating. Ho’s misty theatrical conceit recalls the “smell-o-vision” ploys of William Castle, but his approach is warmer, more oblique and alluring. “You become the cloud,” Frilot says. “It makes you physically a part of the film.”

Physical participation has a moral aspect in Nonny de la Peña’s Hunger in Los Angeles, an ambitious work-in-progress that matches virtual reality with real audio, exploring the potential of immersive technology as a journalistic tool. Based on a disturbing eyewitness recording from outside of the First Unitarian Church food bank in Los Angeles, De La Peña, in conjunction with artists and technicians from several departments at USC, has created a 5-minute recreation of those events. Outfitted with earphones and a virtual reality headset, the participant-viewer is placed on a three-dimensional city street to watch the events unfold (virtually) first-hand, from the front to the back of the food line. De la Peña, a documentarian and reporter for Newsweek, among other outlets, spoke of the need to “develop ways of reporting the news in an immersive way, placing the body in the middle of a situation.” After previous projects placed the participant at Guantanamo prison and in physical states of torture, Hunger in Los Angeles presented a different challenge. “You can’t make people feel hungry,” she said, “but how do you convey the story in a powerful way that really offers some insight into what’s going on?”

A similar impulse motivates Bear 71, a complex transmedia project that places participants in the paws of a majestic Canadian bear. Bear 71 utilizes surveillance footage from throughout the Canadian Rockies of bears and other animals in their natural habitats, online engagement that cannily employs face-recognition software, and real-world participation in Park City and beyond (Festivalgoers can encounter actual bear traps at two different locations in town). The effect is an entertaining game-play offering invaluable insight into the plight of animals that have been tragically disoriented by the encroachments of civilization.

Meanwhile Molleindustria, the business shingle of plucky game designer Paolo Pedercini draws attention to political and economic injustice through video games that subvert expectations of competition and success. Stridently entitled Radical Games Against the Tyranny of Entertainment, his exhibit includes games in which players manage a McDonalds (overworking and firing employees at will) and futilely attempt to work at a series of short order and assembly-line jobs. Pedercini describes his work as “a way to spread positive messages through the medium of video games. It’s essentially some kind of homeopathic remedy to the stupidity of mainstream entertainment.” Cheekily placed directly on the floor adjacent to the Molleindustria consoles you’ll find My Generation, an installation by Eva and Franco Mattes that consists of a busted old PC and a classically beige monitor placed haphazardly on its side that plays hilarious found-footage clips of kids freaking out at misbehaving computers. The ten-year old equipment is already obsolete, but the frustration with technology is likely eternal.

As it happens, the least technologically sophisticated piece in New Frontier might prove to be the most impactful. For Question Bridge: Black Males, a team of artists (Chris Johnson and Hank Willis Thomas, with Bayete Ross Smith and Kamal Sinclair) started with a straightforward documentary project that blossomed into a reclamation of the notion of social networks. The team asked ordinary American black men to stare into a camera and pose a meaningful question to a fellow black man. “We think of black men as the most opaque demographic in our culture,” Johnson said. “How do you really get at how black men think, what issues concern them, what solutions do they have for their own problems, how much awareness do they have?” And so Question Bridge was developed so that they could ask one another, from sons to fathers, workers to incarcerated prisoners, candid questions like, “When you wake up in the morning, do you see first a man or a black man?” For New Frontier, the team installed five monitors side-by-side, on which questions and answers were elegantly arranged to create deeply affecting virtual conversations. Along the way, the artists found themselves developing a new kind of dialogic process, one they hope will come to incorporate 200,000 voices and ultimately live and grow exponentially online.

Question Bridge was developed at the Sundance Institute’s inaugural New Frontier Story Lab last October; and Frilot said the Institute is committed to helping the team reach those goals and take the process further, eventually replicating the process with other demographics, and encouraging others to build on the concept. “I think Question Bridge has the potential to be a game changer,” she said. “Pieces like this, that bring the craft of documentary and photography into the social network, can really change how we think about what a social network can be. As opposed to “Like” or don’t like, this is communication that’s human, that cracks you open, and accesses your vulnerability.”

The future has arrived, but it’s also always changing, and the works at this year’s New Frontier suggest numerous ways in which the cinematic arts, social interaction, and political engagement are fertile terrains for change and evolution. Sundance Institute Founder and President Robert Redford, who spent Thursday afternoon digging into each exhibit and engaging with each of the artists—he could be spotted sinking into Ho’s beanbag clouds and managing at Molleindustria’s McDonald’s—spoke of the vital role that New Frontier will play not only in the future of the Festival, but in the culture at large. “When we started the Festival the idea was that we should never rest on our laurels,” he said, “and this is one of the things that allows us to look forward, not get stuck. I think this is the future. Hybrid situations, where technology and art are coming together.” For the duration of the Festival, and through May 19 in Salt Lake City, New Frontier is where you can see not only art and technology but also the past, present, and future of visual culture come together, debate, and create the world anew.