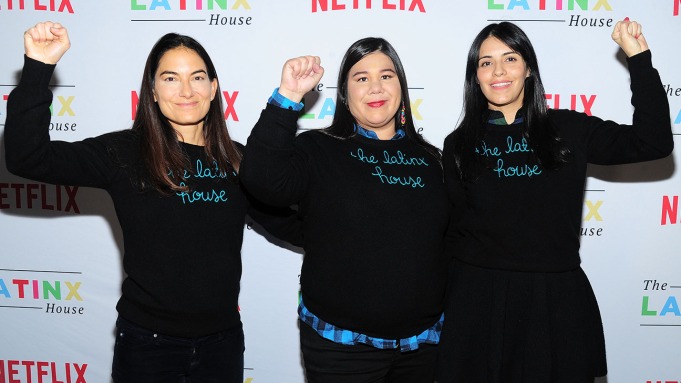 LOS ANGELES (Feb. 23, 2022) – The Latinx House, the Sundance Institute’s Women at Sundance program, Netflix, and Shondaland announced a joint partnership today creating a new program for Latina and non-binary Latinx directors to gain invaluable experience that can help open new doors in the entertainment industry. The Adelante Directors Fellowship will be a year-long program that supports the selected directors’ professional development and creates a pipeline to support independent filmmakers as they level up in their careers and learn more about directing on a series.

The Fellowship includes the opportunity to shadow an episode of a series, a grant to support the artist for the duration of a six-week period while shadowing, a two-day orientation with masterclasses, and bespoke support from The Latinx House. Shondaland will be providing shadowing opportunities as part of the program on some of their productions as well.

“It’s essential that the industry dedicates the resources needed to develop a strong pipeline of Latina and non-binary Latinx directors. We are so excited to be working with Women at Sundance, Netflix, and Shondaland, allies who can help us build opportunities for talented creators. We believe it is critical to be working with like-minded partners in Hollywood to accelerate change in the industry. We hope that this Fellowship is just the beginning and will inspire even more studios and companies to open doors for Latinx directors,” said Olga Segura, producer, activist, entrepreneur, and co-founder of The Latinx House.

“We’re thrilled to be collaborating with The Latinx House, Netflix and Shondaland on the inaugural year of the Adelante Directors Fellowship. Women at Sundance continues to support filmmakers from underrepresented communities and recognizes the impact that can be made by working together with our partners to build a more inclusive community of creators. Providing a shadowing opportunity is one of many ways we hope to increase access and exposure for Latina and non-binary Latinx directors,” said Adella Ladjevardi, Associate Director, Women at Sundance.

A recent 2021 study from the USC Annenberg Inclusion Initiative found that, of the 1,300 top-grossing films released between 2007 and 2019, there were only 12 individual Latinx directors represented – and only 3 out of the 1,447 directors were women of Hispanic/Latina origin. Additionally, the report found that only 5 percent of characters in feature films were Latinx – with those roles often perpetuating damaging stereotypes. There are more than 62 million members of the Latinx community in the United States, representing about 18 percent of the population.

Netflix’s support of the Adelante Directors Fellowship builds on their partnership with The Latinx House and Sundance, and is part of Netflix’s Fund for Creative Equity, an effort to create more behind-the-camera opportunities for underrepresented communities within the TV and film industries.

“We know that great representation on screen begins with who’s behind the camera. We’re honored to be a part of this incredible coalition to help support Latina and non-binary Latinx directors who are looking for a pathway into television,” said Bela Bajaria, Head of Global TV, Netflix.

“Shondaland is committed to finding ways to ensure equal representation both in front of and behind the camera,” said Shondaland’s Head of Creative Production, Tom Verica. “We are incredibly excited to partner with The Latinx House and the Sundance Institute’s Women at Sundance to establish this wonderful program that will mentor and nurture Latina and non-binary directors.”

Applicants for this program have been sourced through targeted outreach from The Latinx House and Sundance Institute. The three selected Latina and non-binary Latinx directors will be announced in early summer.

For more information about The Adelante Directors Fellowship, people can reach out to The Latinx House at info@thelatinxhouse.org.

ABOUT THE LATINX HOUSE

The Latinx House is a gathering place for people who appreciate and support the Latinx community and who celebrate Latinx excellence in film and entertainment. It is also a space to discuss pressing societal issues and the content creation related to these stories. It provides engagement, activation and community-building opportunities. The Latinx House was founded by social entrepreneur and activist Mónica Ramírez, filmmaker and activist Alexandra Martinez Kondracke, and producer and entrepreneur Olga Segura. For more information, please visit www.thelatinxhouse.org.

ABOUT WOMEN AT SUNDANCE

The Sundance Institute has offered unprecedented support to women artists since our earliest labs and Festivals. In 2012, we launched our dedicated Women at Sundance program to foster gender equity in media. In partnership with Women in Film in Los Angeles, we commissioned groundbreaking research with the University of Southern California’s Annenberg Inclusion Initiative to determine the barriers and opportunities for women artists. Guided by these findings, Women at Sundance supports filmmakers from historically underrepresented communities — through yearlong programs including the Momentum and Women at Sundance Adobe Fellowships — to cultivate career sustainability, build community, and strengthen the artist pipeline. We also partner with WIF Los Angeles on the annual Financing and Strategy Intensive, offering workshops on film financing and pitching, and activate systemic change through ReFrame, a nonprofit partnership that mitigates bias during the creative and hiring processes in the film and media industries.

As a champion and curator of independent stories for the stage and screen, Sundance Institute provides and preserves the space for artists in film, theatre, film composing, and digital media to create and thrive. Founded in 1981 by Robert Redford, the Institute’s signature Labs, granting, and mentorship programs, dedicated to developing new work, take place throughout the year in the U.S. and internationally. Sundance Collab, a digital community platform, brings artists together to learn from each other and Sundance advisors and connect in a creative space, developing and sharing works in progress. The Sundance Film Festival and other public programs connect audiences and artists to ignite new ideas, discover original voices, and build a community dedicated to independent storytelling. Sundance Institute has supported such projects as Clemency, Never Rarely Sometimes Always, Zola, On The Record, Boys State, The Farewell, Honeyland, One Child Nation, The Souvenir, The Infiltrators, Sorry to Bother You, Won’t You Be My Neighbor?, Hereditary, Call Me By Your Name, Get Out, The Big Sick, Mudbound, Fruitvale Station, City So Real, Top of the Lake, Between the World & Me, Wild Goose Dreams and Fun Home. Join the Sundance Institute on Facebook, Instagram, Twitter and YouTube.

Netflix is the world’s leading streaming entertainment service with 222 million paid memberships in over 190 countries enjoying TV series, documentaries, feature films and mobile games across a wide variety of genres and languages. Members can watch as much as they want, anytime, anywhere, on any Internet-connected screen. Members can play, pause and resume watching, all without commercials or commitments.

Shondaland is the global media company founded by award-winning writer and producer Shonda Rhimes. The company creates content that fearlessly challenges and entertains audiences. Shondaland has an exclusive partnership with Netflix where it produces streaming content for the media company, including record-breaking series “Bridgerton,” “Dance Dreams: Hot Chocolate Nutcracker,” and upcoming series “Inventing Anna” and “Notes on Love.” In recent years the company has expanded to produce content beyond television and streaming. In 2017, Shondaland launched the editorial website Shondaland.com. In partnership with Hearst Digital Media, the website features empowering and inspirational stories as well as first person essays and culture coverage. In 2019, Shondaland Audio was created in partnership with iHeart Radio. Comprised of both scripted and unscripted content, Shondaland Audio is the home for entertaining, inclusive and informative podcasts. Shondaland was launched in 2005 with the groundbreaking series “Grey’s Anatomy.”