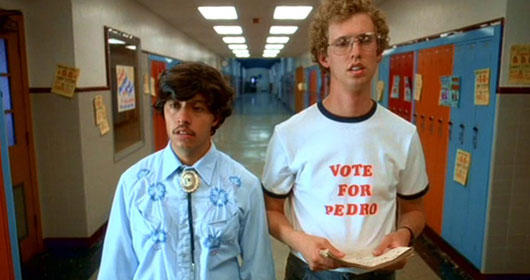 Even the most prescient indie film enthusiast couldn’t forecast the spectacle. It was the 2004 Sundance Film Festival, and Efren Ramirez—who plays Pedro, the bashful Mexican transfer student running for school president in Napoleon Dynamite—recalls pinning posters up and down Main Street in Park City while dutifully passing out “Vote for Pedro” pins. It’s hardly an exceptional sight at the Festival, but certainly not one indicative of a film that would go on to gross some $45 million in domestic revenue. While that anecdote is a compelling one, Ramirez reveals below just how astonishing the rise of Napoleon Dynamite came to be. It’s shelf life hasn’t been so bad either—just this week, a photo of “middle-aged” Napoleon and Pedro made its rounds on the web. But as they say, from humble beginnings come great things…

It’s been 10 years since the premiere of Napoleon Dynamite at the Sundance Film Festival. What do you recall most vividly from that experience?

Well I had been acting for a couple of years, and I had come to a stand in regards to the business—you go out for a role, you book it, and you do your job. For me, that was either a guest-starring role or a recurring role, and I didn’t really understand the whole independent world itself. I just knew that it existed, but I didn’t know how to enter that world and what it meant.

When I ended up getting [the role in] Napoleon Dynamite, one of the reasons I really enjoyed that project was because it was a lead character role. I’m working with this group of people who had a passion for creating projects. Working with Jared Hess (director), John Heder (Napoleon), Aaron Ruell (Kip), and producer Jeremy Coon; I mean, they had gone to film school together and this is what they were doing.

As I arrived, there was all the snow and all the people and some talk of what new films were going to be there. The idea of having to pass out the ‘Vote for Pedro’ buttons and putting the original poster for Napoleon Dynamite – we would go everywhere up and down Park City and we would post it. And I remember having one jacket, and being like “Eh, it’s the snow, we’ll be out in it for a little bit but mostly indoors.” Oh no. All day and all night we’re passing out buttons going “Oh my god I’m cold. Here, watch my movie.”

What was the energy like at that first screening in Park City?

When the movie was screened for the first time, we were all getting ready, and I could feel Jared and his wife Jerusha (who co-wrote the film)—we were all nervous. I was excited because I didn’t know what the results were going to be. I just knew that they were gonna’ screen a movie, I’m in it, it’s sorta funny, and cool, alright, we’re at a film festival.

We all sat in the last row back. Fade to black. Screen the picture. You here a chuckle here and there, you hear people start to laugh. And then things just got bigger and bigger and bigger. And then you start to hear and feel the positive reaction from the audience. I remember all of us looking at each other and going, “Wow, this is kinda cool.”

All of a sudden we’re getting bombarded by the press who are asking about Napoleon Dynamite like it was some big mind exploration film. And it really wasn’t. It was a simple story based on Jared’s life and the life that he knows. But it is his way of studying film and telling stories as a director and being able to direct us that made it great.

It’s marked in the film. And I imagine the atmosphere on set being very relaxed and liberated.

When I got to Preston, Idaho, first I go, “This is it?!” We stayed at the only hotel there. When I went to the home base and met up with John Heder, he said “Hey, are you Pedro?” [in a flawless intonation rivaling that of his misfit co-star]. And I thought, hey, maybe this will work. I was afraid of getting fired, because when I started to make choices as Pedro, you’re still wondering if this is exactly what the director wants.

And when I met Jared Hess, you could tell that he was very accurate with what kind of story he wanted to tell. He had done a short film called Peluca where there are two characters, Pedro and Gale, and he said, “Watch this film. Go put these two characters together and form Pedro.” And I thought, uh, alright, you want him to be schizophrenic?

There has always been a lot of conversation around the film’s budget. Just how truly independent was Napoleon Dynamite?

We know it’s independent. At some point somebody’s going to say, “Alright, who’s paying for burgers now?” And it was rough. In the second week I found out that [Jared Hess] and his wife were sleeping on the ground while she was pregnant. They were just struggling to make it happen.

Sometimes Jared would tell me, “Alright Efren, we only have one take.” And it wasn’t because of time; it was because that was all the film that we had. There weren’t any chances for errors. But he didn’t let us know that while we were shooting. He wanted us to have the freedom to trust each other as actors in the scene. And I fell in love with the group because there was that unity and bond between all of us.

You’ll be there when the film screens at Hollywood Forever Cemetery as part of Sundance NEXT FEST. Do you manage to still enjoy watching it?

I’ve never watched the film in my house—it might just be too narcissistic. I’m my worst critic. But the last time I did see it was at the Academy after they did the unveiling of the Napoleon Dynamite statue by 20th Century Fox. They screened it at the new location they’re still constructing.

We did a Q&A, and I remember sitting and watching, and many people in the audience had seen it a billion times, and then there were people who had not seen it yet. It still remains the same—this is a film you could watch a million times and still find it funny. It’s still a wonderful film.