Distributing Your Short: 4 Lessons Learned From Our Collab Video 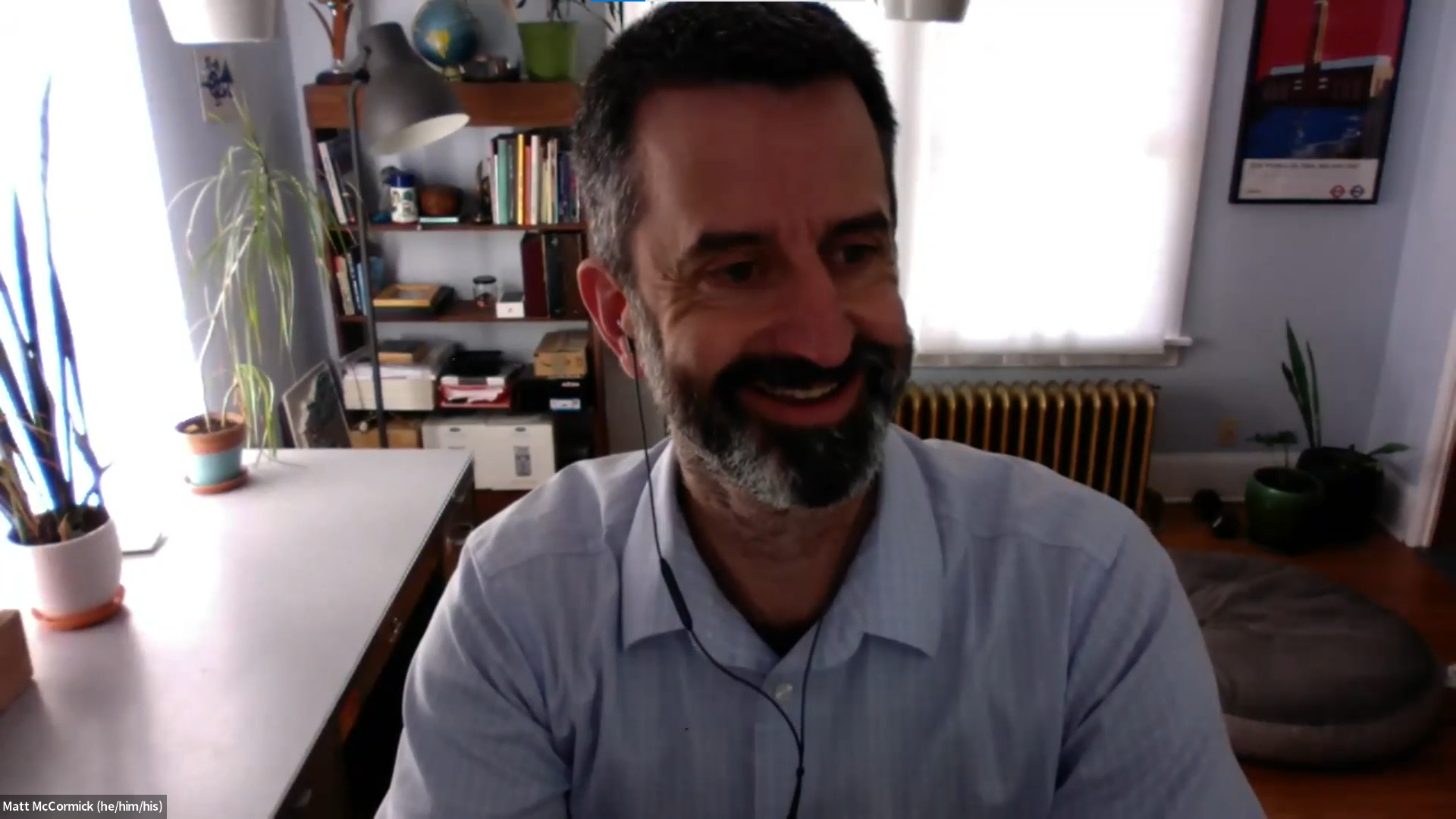 “Short films force you to be poetic. They force [us] to be visual and sonic storytellers.”

These are some opening words from filmmaker and professor Rodrigo Ojeda-Beck during Sundance Collab’s “Advisor Studio Series: Distributing Your Short” on April 22. Candice Lewis from the Collab team joined Ojeda-Beck and fellow filmmaker/professor Matt McCormick as they discussed some crucial topics surrounding the process of distributing a short film — but not before she asked each of them one important question: “Why Shorts?”

“I’ve made a few features, but I always come back to the short form,” says Ojeda-Beck. “You can explore an idea on a smaller budget. Screenplays are great and the dialogue is wonderful, but it takes so much time to get that language out. What I love about [making] a short is that it really forces you to condense a lot of these ideas into great visuals and sound. It forces you to be a poet and I love when a film operates that way.”

But when it comes to distributing your short after it’s been created, both McCormick and Ojeda-Beck centered their discussion around four main ideas: managing expectations, budget control, the importance of film festivals, and community. As working film professors and directors, they offered some unique insight on a few of the challenges and triumphs that can come with making and distributing a short film.

Be Conscious of Your Budget

“There’s something incredibly freeing about making shorts, and one reason is due to access and resources,” McCormick says. He explains that making a short meant that he was able to work with much smaller teams — sometimes even by himself — and that helped with “logistical nightmares” like scheduling.

“Feature films take long. It takes time, energy, money, labor. [When I’m making a short,] I can take some of these burdens on myself and that makes a completely different experience,” says McCormick.

It’s also so important to make an honest assessment of your film’s potential, he explains. Deciding how much money you are willing to spend on certain aspects (for example, entry fees to film festivals) is crucial. “Form a budget and make an assessment before you do anything else,” he says.

The Importance of Film Festivals

Lewis asked both directors to share what they think the value is when it comes to submitting to and being involved in film festivals, which ones to apply to, and how to get the most out of the experience.

“Film festivals are great because they serve a number of purposes at once,” says McCormick. “It’s a wonderful platform for somebody to share their work with an audience of people who are going to be interested in it. It’s a very intentional crowd.”

And he emphasizes, regardless of whether you get into a big festival or a small one, the experience is invaluable.

“It’s not just ‘Hey, here’s my movie, look at it and give me praise.’ You’re meeting people, you’re seeing [other artists’] work, you’re potentially meeting future collaborators, and it looks great on a resume for future projects and grants because it’s a juried process. And that’s always going to be more impressive than getting, say, 20,000 views on YouTube.”

And even if you don’t get accepted to a big festival (or a small one for that matter), you should still go to them — both McCormick and Ojeda-Beck agree — because there is so much you can learn from the films that do get accepted in a particular year.

“If I want to make a film, I should start looking at the work that other people who are getting accepted are making,” stresses McCormick. “Even [submitting to and attending] your local film festivals — those are so informative and will make you a better filmmaker. It can also radically increase your chances of getting into those festivals that you’re really hoping to get into.”

As for Ojeda-Beck, who’s been accepted into a number of Festivals including the Sundance Film Festival twice, he explained that paying attention to what successful filmmakers are making and where they’re submitting can make a huge impact. “If this film, done in style X, played at festival Z, and I’m emulating that, it should be on my radar,” he adds. “When I was younger I’d do a lot of that.”

One of the first things Lewis asked McCormick and Ojeda-Beck was their advice on setting intentions and managing expectations once they’ve developed their short and are ready for distribution.

Both candidly stressed that money should not be a driving factor when it comes to making a short film. “Making a short is not going to be a way to make a living for the overwhelming majority of people who are making [them],” McCormick explains.

However, they were never in it for the money. The opportunity that comes with developing and distributing your short is worth so much. “The personal value, for me, is far greater. You can’t add it up in dollars,” McCormick says.

“There are a lot of very enriching reasons to make shorts. For me, not only do I see this as an access point to travel around the world and to meet some really amazing people, I get to promote my ideas to an audience.”

Ojeda-Beck echoes McCormick’s point, recalling one of his shorts that was accepted into Sundance Film Festival several years ago. “I think I only made $4,000 that year, but it was a really meaningful experience,” he adds. “One thing that doesn’t come with these tenets of success is a really lucrative financial return.”

He continues: “But there are other things that were ultimately more important like the conversations that were happening around our films and the impact we were making as filmmakers. It was never the intention to make a profit, so it was never a let down”

It’s not just the festival experience that both the professors/directors find vital to the process. Distribution outside of festivals was also a burning question for the group and their answers varied from getting involved with local arthouses and nonprofits, to DIY screenings. The main takeaway? Community.

“Things I’ve found that I think are really important outside of festivals are to connect with local and/or regional art or film nonprofits,” says McCormick. “Oftentimes if you live in a town that has a big festival, there’s usually an organization behind it, and they might have year-round programming. Find those organizations in your town. Go to screenings and become a part of that community. That can really be an important asset for filmmakers.”

Something unique that McCormick and Ojeda-Beck share is that they both have their own experiences with what they call “DIY Screenings.” Sometimes getting your project in front of people means doing simply that — partnering with a local arthouse, inviting all the producers and directors you know (as well as their guests), and hosting a premiere.

“We [myself and other filmmakers I was friends with] were usually getting rejected from festivals, but we figured, let’s find somewhere — whether it’s an independently-owned theater or just a building where we can set up a projector ourselves — and get together and show our movies.” McCormick shares.

“When you do that with a team of people, every person’s going to bring their group of friends and collaborators and the next thing you know you’ve got a packed house, a nice sized audience.”

And those regional screenings McCormick hosted with his team back in the mid-90s featured some prominent filmmakers and screenwriters who are very successful today, such as Miranda July, Vanessa Rennick, and Jon Raymond.

“You’re sort of cultivating this community of artists, and who knows where everyone’s going to end up,” he explains. “Dialing into that local and regional community of filmmakers can pay you back in so many different ways. It’s a very important thing to pursue.”

The two filmmakers/professors [McCormick and Ojeda-Beck] came full circle during the webinar as Ojeda-Beck recalled being inspired by McCormick’s early work when he would watch those same regional screenings on DVD. As Ojeda-Beck said through laughter, it was a true “fan-boy moment.”

“I was an undergrad when we started getting the DVDs. To see all this stuff that Matt and his colleagues were cooking up. It was a huge influence.”

Sign up for Sundance Collab to watch the full webinar and join the online course: Screenwriting: Crafting Your Short Film — all for free.