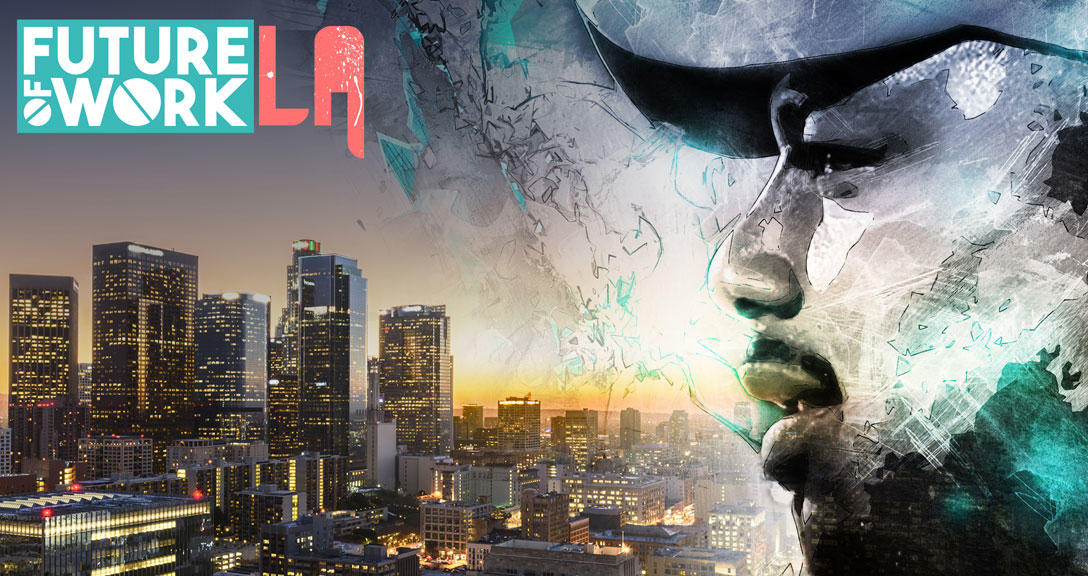 Three artists created a future Los Angeles as part of the Sundance Institute New Frontier World Building Residency. Join the artists for a presentation of their project on Wednesday, October 4, 2017, at 1:30 p.m. at the USC School of Cinematic Arts, SCA 112. Their work will also be on exhibit in the lobby of the SCI Interactive Media Building at the USC School of Cinematic Arts October 4–6, 2017.

Imagine a world where artificial intelligence (AI) is so intuitive, attentive, and personalized that it knows everything about you—in fact, it is a human, watching your every move.

What if one day you had the ability to speak to your deceased relatives? What would they say to you? What would you ask them?

What if, in 2020, ‘The Breakdown’ occurs? The Breakdown—also called the fourth LA riots, the second Civil War, and the May to Labor Day Rebellion—is a series of conflicts that erupt in Los Angeles. How does this impact Los Angeles moving forward? What does this Los Angeles look like?

What does it look like 7 years later, in 2027, one year before 2028 Los Angeles Olympics? Imagine you are buying a coffee. How do you pay? We’ve moved on from cash and coins into digital currency: SmartCurrency. Who controls SmartCurrency? Is there someone who is able to intercept our transactions?

In the future designed by artists Grace Lee, Lauren McCarthy, and Tony Patrick at the Sundance Institute New Frontier World Building Residency, these what-ifs have become fully realized visions of the future.

For three months, starting in July 2017, these artists participated in a deep, collaborative exploration of the future of Los Angeles: a Los Angeles that has just recovered from the fourth Industrial Revolution and The Breakdown 2020, a revolutionary event that, unlike previous civil disturbances, is not just physical but also ideological, psychological, and digital.The Breakdown breaks out between Connectors, those who believe in diversity of people and ideology, and Nationals, people with siloed and insulated worldviews.

To truly see this future vision of LA, the artists engaged in the collaborative, immersive design process of world building. Together with their world-building guides, they imagined a singular story world from which their individual future prototypes have emerged.

While world building was once reserved for big-budget blockbuster games and films, Pigeon Hole productions believes it is a process that is now accessible to artists across mediums, and it can shift how artists collaborate and think creatively.

“It’s complex and collaborative, and democratizes creativity to the whole production process. At the dawn of the fourth Industrial Revolution, world building is the practice of understanding how and then making, the virtual into the real, together,” said Pigeon Hole’s Joe Unger.

In fact, Unger believes that if artists participate in this process, it can have real-world impact. “Today, if we can choose to build those story ecosystems with the intent of making them a reality … that empowers everyone to build their future.”

The residency artists’ personal connections to and understanding of Los Angeles also informed their conversations about the future. What was sacred, and what was negotiable to them? Making these decisions, rooted in their personal experiences, allowed them to see clearly what the future might look like. For the artists, this personal connection is what made the world-building experience fulfilling.

Lauren McCarthy, one of the artists in residence, said, “Working with the other residents and lab participants has been really thought-provoking and inspiring. The first day really set the tone. Each participant was given an opportunity to share their story and relationship to LA and this immediately grounded our ongoing conversations in real lives and people.”McCarthy is a creative technologist whose work often comments on the nature of being human through technology. She is an assistant professor at UCLA Design Media Arts, and the creator of p5.js.

The inclusion of many voices and experiences makes the process broad and limitless—a little daunting for those with no prior world-building experience. But the artists found clarity when the individual elements they imagined began to coalesce into one world. Writer and artist in residence Tony Patrick was pleased to discover that world building is something he had been doing his whole life but did not have a word for.

“Since childhood, I’ve found myself crafting environments for my creations to thrive in—mapping out experiences and hypotheticals for others to experience. Taking real-world data and science and crafting an aspirational, fictional future which may (or may not) alter our present societal ailments, communities, and emerging technologies is an artist’s dream.”

As a writer and creator of comic books, Patrick’s work naturally transcends media platforms. He is the creator of X’ed and a co-writer on the upcoming DC Comics series Batman & The Signal.

It is the unique experiences and perspectives of Grace Lee, Lauren McCarthy, and Tony Patrick that add depth and richness to the story world as it develops. As world-building expert Trisha Williams recognized, “Innovative ideas and narratives emerged that wouldn’t have been possible from a single creator.

To push this story world even further, the artists were joined by resident researchers. Dione Oliver drew upon her experiences as a professional archivist and cultural anthropologist to become the “world keeper,” tracking the timeline and moments of historical importance in the world (view this timeline here). Brian Cantrell, a PhD student in the USC Media Arts + Practice program, became the “world translator,” rooting the prototypes and story world in real-world research. JP Francis became the “world disruptor,” using his knowledge of systems biology and machine learning from the USC Viterbi School of Engineering to challenge the artists’ visions of LA.

Disruption is a natural element of the world-building process. No speculative world build is complete without conflicting thoughts, challenges to overcome, and intense and lively discussion. An extremely important conversation about race and oppression occurred during the residency, and it became a lens through which to view the future LA. Artist Grace Lee drew upon her own experience as a documentary filmmaker who has told stories of civil unrest to make sure these conversations were included in the prototypes of the future. Her past work includes the Peabody Award–winning American Revolutionary: The Evolution of Grace Lee Boggs and the interactive documentary K-TOWN ‘92, about the 1992 Los Angeles riots.

“One of the most critical questions that came up for me was, ‘What happens to race and oppression in the next 20 years in Los Angeles?’ I know that world builds are meant to be aspirational, but we needed to have this conversation, even if it took us to uncomfortable places. Not talking about it for the future seemed akin to sweeping this conversation under the rug for good.”

The Breakdown emerged from these intense discussions, a reflection of our present-day struggle to protect civil rights. It was decided by the artists and advisors that not understanding and honoring our complex, interconnected, and often contradictory histories led to The Breakdown of Los Angeles. They go on to describe that “some observers point to the 2016 election of Donald Trump, a polarizing figure whose racist, misogynist, and xenophobic rhetoric and policies emboldened a new generation of Nationals to target their enemies using violent tactics in worlds real and digital. His ascendancy forced Connectors from all over the world to organize a new movement to counter it.”

During this civil war, all data has been stolen and distributed publically—Los Angeles is left without its identity, metrics, and archives, forced to rebuild. Connectors turn inward for the solution. In order to make way for the new, they implement Renewal Centers in each community to foster connection and replenish the mind, body, and soul—making way for the New Age of Connection.

To learn more about The Breakdown, Renewal Centers, the New Age of Connection, and the world-building process, please join the Sundance Institute New Frontier World Building Residency for a presentation of The Future of Work: Los Angeles on Wednesday, October 4, 2017, at 1:30 p.m. at the USC School of Cinematic Arts, SCA 112.

An exhibition of the projects created during the residency will also be on display in the lobby of the SCI Interactive Media Building at the USC School of Cinematic Arts October 4–6, 2017. The exhibition showcases the collaborative, interdisciplinary work of the World Building Residency fellows, including prototypes from the future Los Angeles they designed, and was produced in collaboration with Pigeon Hole Productions, the World Building Institute, and the Sundance Institute New Frontier Labs.

The New Frontier World Building Residency is supported by The Ewing Marion Kauffman Foundation and Turner.