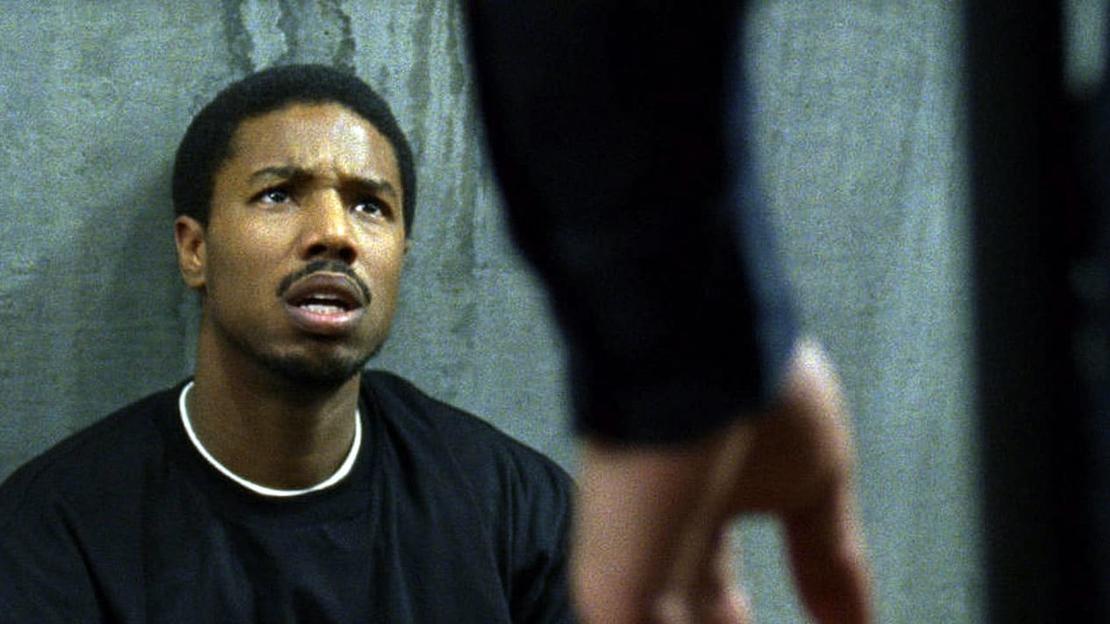 Michael B. Jordan in ‘Fruitvale Station’

Sundance.org is dispatching its writers to daily screenings and events to capture the 10 days of festivities during the Sundance Film Festival in Park City, Utah. Check back each morning for round-ups from the previous day’s events.

It was an uncommonly cathartic night for both those who made this powerful film, and those whose real-life tragedy gave rise to it. Saturday’s premiere of Fruitvale, featured in the Festival’s U.S. Dramatic competition, brought together debut writer-director Ryan Coogler, his extended crew and cast, including lead actor Michael B. Jordan and Octavia Spencer, and several family members of Oscar Grant, the young man whose 2009 murder the film dramatizes.

Starting in the early morning of New Year’s Eve and ending 24 hours later, Fruitvale closely follows Grant during his final hours, from the apartment he shared with his girlfriend and young daughter to an aborted drug deal, from his mom’s birthday party to the Oakland train platform where a transit cop fatally shot him in the back. For many of those involved, particularly director Coogler, the film was a deeply personal project.

“Oscar and I were born in the same year, and came up in the Bay area through some of the same circumstances,” he said during a post-screening Q&A that alternated between euphoria and solemnity. “Often you’re not looked at as a full human being, sometimes by someone who’s supposed to protect you, sometimes by someone you bump into on the street. But any of the 118 movies here has a piece of that director’s life in it. I don’t care if it’s a work of magical realism or a heavy drama, filmmakers are going to put bits and pieces of their life in it. For me, with this, with Oscar, it came fairly easily because of what I lived.”

Coogler said it was important to show the full humanity of Grant, which meant showing him as neither the dangerous felon of many media depictions, nor as a saint. In the film he’s a flawed 22 year-old dogged by demons, but also a loving father and son. After the screening, Grant’s aunt and uncle each stood to thank Coolger for his honest portrayal, even though revisiting the events of that day proved extremely difficult.

Spencer expressed hope that something good might come of the tragedy. “We’ve come a long way in this country but we still have a long way to go in terms of how we deal with each other as human beings,” she said. “I wish this were based on a fictional story. I wish that a young man didn’t have to lose his life so that we would be here on this solemn occasion. But I think it’s a testament to who Oscar was and who he aspired to be that we are here, because we don’t need another Trayvon Martin. We don’t need another Oscar Grant. And if we keep this story out there and talk about it as human beings, talk about how we treat each other, then hopefully it would not have been in vain.”

After the sold-out crowd scrambled to find the scattered remaining empty seats to watch the romantic drama Breathe In, Sundance Film Festival director John Cooper welcomed 29-year-old director Drake Doremus to the stage, where he thanked the audience for giving him a home. Breathe In, the filmmaker’s follow-up to his 2011 hit Like Crazy and one of this year’s most sought-after tickets, marks Doremus’s third premiere at the Festival.

The movie, an exquisitely photographed (by John Guleserian) and delicately acted romantic drama, reunites the filmmaker with his Crazy collaborators, actress Felicity Jones and screenwriter Ben York Jones. After the credits rolled and the rousing applause died down, Doremus again took the stage to speak about the reunion of the trio. “We had such a good time making Like Crazy that we wanted to continue to explore that dynamic,” he revealed. “We wanted to try to push it.”

Breathe In certainly pushes beyond expectations. What sounds like a familiar tale —the effect of a comely British exchange student on her American host family—becomes in the hands of Doremus and his appealing cast (which includes Guy Pearce and Amy Ryan, both giving vivid performances) an intimate, edgy romantic drama.

To achieve this, Doremus says he and York Jones created an outline for the story filled with subtext, objectives, and exposition about what was really going on in the scenes, but he also asked the cast to improvise.

“I give a lot of credit to the actors who delved into the parts and let themselves be as vulnerable as they did to explore the characters in the moments,” he said. “We kept pushing and pushing until we had something that felt really uncomfortable and then we’d move on.”

Ryan agrees that this filming technique helped make the drama of the film more immediate and real. “I’ve never done a film where I had so much input with the dialogue,” she said from the stage. “He makes you feel like you can do no wrong. He’s amazing.”

Even though Marta Cunningham had never directed a film before, as soon as she learned about the murder of 15 year-old Lawrence “Larry” King by classmate Brandon McInerney in 2008, it wasn’t a question of if but of how she would do so. “How could you not do a story on it?” she said after the world premiere of Valentine Road, which screened at the Temple Theater on Saturday as part of the Festival’s U.S. Documentary competition.

The news items she encountered all sensationalized Larry’s story, fixing on his preference for wearing makeup and women’s clothing as if he’d provoked his own cold-blooded execution. It led Cunningham, a dancer and actress by trade, to do her own reporting, first attending McInerney’s murder trial in Oxnard, California, and eventually pursing interviews with everyone from Larry’s friends to Brandon’s family. “I wanted to know every single thread of that story,” she said.

The film movingly and chillingly recounts the murder, as well as its ongoing aftermath for Larry’s friends—some of whom were also wrestling with how to be gay and transgender at school—his teacher Dawn Boldrin, who was scapegoated for being tolerant of Larry’s self-expression, and McInerney’s troubled family, which had already unraveled thanks to years of drug abuse and physical violence.

Yet thanks to Cunningham’s thorough, four-and-a-half year pursuit of new information and angles on the subject, the most shocking material of the film comes courtesy not of the damaged people at the center of the tragedy, but of peripheral characters who reveal the depth of intolerance in American culture: 30-year teaching veterans who assert that Larry got what was coming to him, and jury members whose suburban ordinariness conceal infuriating degrees of bigotry and moral irresponsibility.

Asked during the post screening Q&A how she could sit the same room with some of these subjects, Cunningham said that, “acting is a very valuable tool for documentary work. It’s not easy but you have to do it. And then I would go home and just sob.” Yet there was never any question of whether such voices were appropriate to the narrative of Valentine Road. “If we are ever going to change any aspect of our culture, we have to tell the whole story,” she said.

When asked how the film speaks to more recent incidents of gun violence in schools, producer Eddie Schmidt revealed that he grew up in Newtown, Connecticut, home to December’s Sandy Hook elementary school tragedy. “My parents moved us to that community to be safe,” he recalled. Sensing that many in the audience were still shaken by what they saw in the film, Cunningham expressed hope that something positive could come of the experience. “You’re angry?” she said. “Good. We want people talking about it.” If the bustle on the way out of the theater was any indication, they will be.

Even the monoliths of the film world sometimes find themselves motivated by fear. Speaking at the annual Directors Brunch at the Sundance Resort Saturday, Sundance Institute President and Founder Robert Redford addressed a pulsating room of 2013 Festival filmmakers. “I get afraid that I’m going to lose the thing that’s most important, which is connecting you all,” he revealed.

With that admission still resonating among some 200 attentive listeners, the man whose vision was to construct a safe harbor for filmmakers to create and showcase their work vividly retraced his 30-year journey with Sundance.

“This is the place where it all began,” said Redford. “It began in 1980 with our Lab program. The Lab program was based on a concept that asked, ‘What can we do to provide opportunities for new voices in independent film?’”

Within a few years, the success of Sundance Institute’s Labs program prompted the creation of a space to showcase this new work. Largely ignored by studios, these films were left without a platform, and worse, without an audience. “They went out, and there was no space for them in the mainstream,” Redford noted. “And that led to the next phase of Sundance Institute, which was the Sundance Film Festival.”

As Redford eloquently guides the room of rapt filmmakers through the Festival’s formative years, one can’t help but notice the hoard of phones elevated and pointed at the speaker. There’s an almost eerie sense of role reversal developing, with the stars of the Festival content to temporarily abandon their podiums in order to digest what all of this really means.

“What I would like to impart to you is that as you go forward, obstacles will show up. They are there and they are going to be there. Don’t get stopped by them. Just keep going. It’s all about perseverance. It’s all about pushing through.” It’s the most profound statement that the Sundance founder will make all week. Not because of the poignancy with which he speaks, or the intrinsic weight in his words. Rather, because these moments embody the origins of Sundance, and these are the artists who are tasked with keeping them alive.

As the crowd settled into the Filmmaker’s Lodge to warm themselves with tea, coffee, and baked good, panel moderator Sharon Stewart introduced clips from films starring five actors who are destined to become better known after this year’s festival.

Stewart asked the performers (Fruitvale’s Michael B. Jordan, This is Martin Bommer’s Paul Eenhoorn, Afternoon Delight’s Kathryn Hahn, Emanuel and the Truth About Fishes’ Kaya Scodelario, and Mother of George’s Danai Gurira) what drives their sometimes difficult career choices. Do they take studio roles to pay their mortgages or is the material in independent cinema so strong they can’t pass up the opportunity?

Jordan says that in the case of Fruitvale, for which he’s garnering raves for his performance as Oscar, a young man shot down by police officers following an altercation, it was definitely a chance to communicate about a hot-button issue. “It came about right after the Trayvon Martin incident in Florida,” he recalled of his eagerness to star in the indie production. “As an actor you try to keep your personal opinions to yourself sometimes. The best way I can express myself is through my work. This was the most I’ve ever put into anything.”

Eenhoorn, who lives in Seattle, says he took the lead role in This Is Martin Bommer because he knew the character. Still, he remains pragmatic. “You do it because you love it,” he said about the sacrifices he makes as a part-time actor. “We’re crazy aren’t we? We spend half our time broke and then the other half trying to get into film so we can become even broker.”